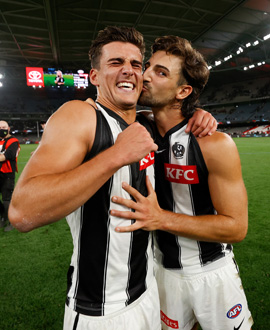 MELBOURNE, AUSTRALIA - MARCH 18: Nick Daicos (left) receives a kiss form brother Josh after the 2022 AFL Round 01 match between the St Kilda Saints and the Collingwood Magpies at Marvel Stadium on March 18, 2022 In Melbourne, Australia. (Photo by Michael Willson/AFL Photos)

Hello Magpie fans – and welcome to a season that already feels different from any other over the past decade. With a new coach, new assistants and a new game plan it will be exciting to see how things develop over the next six months – and especially to watch our crop of promising youngsters.

As always, it promises to be a big year on the history front too, and we’ll do our best to keep you informed of everything that’s going on.

As always, get in touch if you have any questions or suggestions. In the meantime, we’ll see you at the footy!

Round 1 History
This year was only the fourth time we’ve played St Kilda in the first round of a season, and every one of them has been historic in its own way.

The Daicos family
You might have heard a whisper that a kid called Nick Daicos has joined his brother Josh at Collingwood. When he ran out against the Saints on Friday night he became the 45th father-son to have played for the club, and he and Josh became the 47th combination of brothers (104 siblings in all). Plus father Peter became just the eighth former Pie to have produced multiple Magpie offspring, joining Bill Twomey Snr, David Cloke, Brian Beers, Syd Coventry, Charlie Pannam Snr, Ray Shaw and Gavin Brown.

And while on the subject of Nick’s impressive debut, it also won him bragging rights around the dinner table. When Peter made his debut in 1979 (also against the Saints), he had 19 kicks and 7 handballs, so 26 disposals in all. Nick ended last night with 27, edging out his old man by one! But they both had debut kicks they’d rather forget: Peter’s first apparently sailed out on the full, while we know what happened with Nick’s!

A ‘new’ ANZAC
With ANZAC Day fast approaching, new research has uncovered that former player Jim Keogh was also among those who fought in the First World War. You can read his story here  – and it’s a quite remarkable one.
https://forever.collingwoodfc.com.au/players/jim-keogh/

Vale Ken Turner
We lost our third 1958 Premiership player in just over a year when the wonderful Ken Turner, who was just about BOG on that day in ’58, passed away suddenly in February. Read more on the sad news here
https://www.collingwoodfc.com.au/news/1060150/vale-ken-turner

Tell us how you fell in love with the Pies
And while we’re on the subject of great Collingwood stories, we’d love to know how and why you started following the Pies, and what made you fall in love with them. Submit your entry here:
https://tradablebits.com/tb_app/470471

Robin Murphy
We lost one of our longest serving and most loved members of the Archives just before Christmas. We miss you Murph.
https://www.collingwoodfc.com.au/news/1056289/vale-robin-murphy

Foyer displays – get in quick
We have a new cabinet display in the foyer celebrating the life of Murray Weideman. And we’re once again keeping the 2010 and 1990 displays in place, simply to give people a chance to see them. But the foyer will be being redeveloped at the end of the season, so they’ll be taken down before then.

Phil’s Trivia
This issue’s trivia question from Phil Taranto (no relation to Tim):

Which guernsey number has the most goals in Magpie history? We reckon you’ll probably guess the first one, but we want a top 5!

Donations
Check out our latest bunch of acquisitions, including some wonderful 1920s ephemera, Peter McKenna scrapbooks, a great collection of seasons tickets and a box of superb scrapbooks from the 1980s/1990s. Thank you to EVERYONE who donates to us!
https://www.collingwoodfc.com.au/club/history-and-heritage/latest-acquisitions