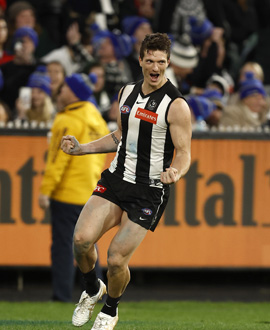 Brody Mihocek celebrates one of his four goals against Melbourne.

Hello Magpie fans – and what a start to the year this has been!

I said in our pre-season newsletter that these would be exciting times, but I don’t think too many of us realised just how exciting it would be – or how quickly it would feel this way! The new game plan is brilliant to watch, the players are obviously loving it and footy is back being fun again. Plus we’ve beaten old foes Essendon, Carlton and Melbourne, which always feels good. Let’s hope we carry on in similar fashion for the remainder of the season.

As always, we’ve been plugging away on the history front, so here’s our latest update on all that’s been going on. Feel free to get in touch if you have any questions or suggestions.

In the meantime, we’ll see you at the footy.

Pendles & Sidey
The last men standing from the 2010 Premiership, Scott Pendlebury and Steele Sidebottom, have now played together 255 times (up to the bye) – making them the most prolific teammates in Magpie history (the previous record belonged to Len Thompson and Wayne Richardson). At a League level the record is held by Adelaide’s Andrew McLeod and Tyson Edwards with 307, but Pendles & Sidey could crack the top 20 by year’s end if injuries permit. And the way both are playing, there would have to be a good chance to add to the tally next year.

Checkers loves a four-goal haul
And speaking of unusual records, our much-loved Brody Mihocek – is there a harder-working footballer going around? – brought up his own piece of history against Melbourne on Queen’s Birthday. That was the 12th time he’s kicked four goals in a game – but somehow he’s never made it to five. He is now equal with North Melbourne’s Jim Krakouer with that claim-to-fame (another Magpie, Leon Davis, did it 10 times without ever making it to five). Thanks to Col Hutchinson at the AFL for his work with this statistical oddity.

Pendles reaches 9000 career stats
During the Round 12 game against Hawthorn, Scott Pendlebury became just the fourth player in history to reach 9000 career disposals. He sits behind Robert Harvey, Brent Harvey and Kevin Bartlett in the all-time list – but with a higher per-game average than all of them. And he’s a fair chance to be in second spot overall by the end of the season. Well done skipper!

‘Harry’ Lauder still the King
After Melbourne’s shock loss to Freo in Rd 11, our Machine team member Albert ‘Harry’ Lauder is STILL the only player to have wins in his first 18 games as a player! The Demons’ Jake Bowey was going to equal Lauder’s record that day but the loss put paid to that. Harry played 36 games overall across six seasons, and only experienced four losses. You can read his story here:
https://forever.collingwoodfc.com.au/players/albert-lauder/

The Collier legend lives on
And while we’re talking about The Machine era, it’s been great to see Harry Collier’s great grandson, Jack Raines, running around in the seconds this year. You can read his story here:
https://www.collingwoodfc.com.au/news/1135012/this-collingwood-life-jack-raines

Our All-Oz Girls
Big congratulations to Jaimee Lambert and Ruby Schleicher, who were selected in the AFLW All-Australian team earlier this year. That made it back-to-back gongs for Ruby, and also a second selection for Jaimee, who was first chosen in 2020. Two absolute guns, and we couldn’t be happier for them!
https://www.collingwoodfc.com.au/news/1095829/two-pies-earn-all-australian-honours

And our AFLW Young Guns
And more congratulations, this time to Jordyn Allen and Lauren Butler, who have been named in the Players’ Association ‘22Under22’ for a second consecutive year. The selections were decided by popular vote, and Jordy polled 70%, placing her in the top 10 most popular players in the side. Jordy and Wiz have been huge over the past two years, and they deserve all the accolades coming their way.

Phil’s Trivia
Who has worn the Collingwood jumper in more than 300 games for the club?

I know. At first glance that’s too easy (Pendles, T Shaw, G Coventry). But what we’re looking for is those who have played 300 or more across all three grades – seniors, reserves and under-19s. That makes it a bit trickier. There are six on it (and a sneaky seventh). See the names at the end of this story!

Another Magpie First
And finally, congratulations to former Magpie Tony Armstrong, who just took out a Logie for Best New Talent. Think he might just be the first ever Magpie Logie winner!

Donations
Check out our latest bunch of acquisitions, including a jumper worn by Geoff Raines in his first season with the club in 1983! Thank you to EVERYONE who donates to us!
https://www.collingwoodfc.com.au/club/history-and-heritage/latest-acquisitions

* Pendles also played a further 10 games with our seconds when they were affiliated with Williamstown. So technically that would push him above Shawry overall. But he wasn’t wearing the Collingwood jumper then so we’re not counting them in this list!

Plus, Dane Swan played 258 games with the seniors + 42 whilst our seconds were affiliated with Williamstown. Which also brings him up to a nice even 300.