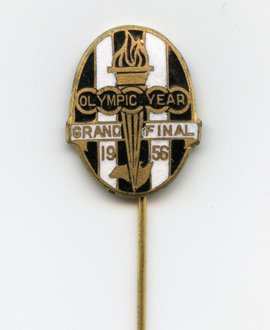 We were fortunate to have been gifted some wonderful items at the club last year, chief among them Marcus Whelan’s 1936 Premiership medal, his Life Membership medallion and a silver coffee pot given to him by the club on the occasion of his wedding in 1939. The items were donated by one of his grandsons, Daniel Whelan.

But there have been numerous other generous donations too. The daughter of Magpie ANZAC Ted Prendergast gave us a battered old silver cigarette case that had been struck by bullets in France in 1917, probably saving Ted’s life. It is a powerful reminder of how survival in times of war can really come down to a matter of inches.

Magpie 1958 Premiership hero Brian Beers gifted a very special WEG poster that had been signed and noted by Ron Barassi, acknowledging that the Pies were the better side on the day. The poster became a central part of our 60th anniversary celebrations of the Miracle of ’58.

Peggy Boyd presented us with a signed menu from the 1930 Premiership dinner – she had actually been at the dinner herself! – as well as two rare brooches from the period.