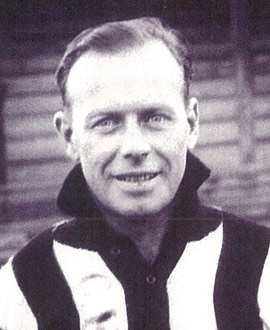 The Collingwood Football Club has been lucky enough to receive a number of important donations recently, including one of Marcus Whelan’s Premiership medals.

Whelan’s 1936 Premiership medal and the Life Membership medallion he was awarded in 1945 were both recently given to the club by one of his grandsons, Daniel Whelan. Also included amongst the items was a silver coffee pot given to Marcus by the club on the occasion of his wedding in 1939.

The items have now been ‘reunited’ with Marcus’s 1939 Brownlow Medal, which came back to the club several years ago.

“My family and I never had any doubts where the medals awarded to my grandfather would eventually reside,” said Daniel.

“It is an honour to him and to us to see them restored to his and our beloved club, Collingwood.”

“We’ve only had nine players win the Brownlow, so it’s elite company,” he said. “We didn’t have much on Marcus, other than the medal itself, so to get these items from the family is a wonderful bonus. We can’t thank Daniel and his family enough.”

The club thanks everyone who has donated items. If you’ve got anything old and interesting lying around that you’d like to make part of the Collingwood collection, contact our Archives team at archives@collingwoodfc.com.au or club historian Michael Roberts on forever@collingwoodfc.com.au