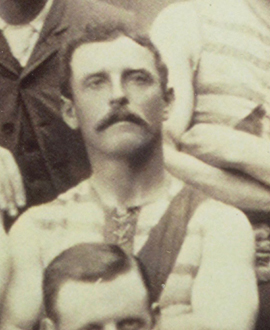 Alf Dean, chosen as captain for the first practice match but dumped before the 1892 season began.

You might think that the build-up to Collingwood’s debut as a football club would have been nothing but excitement and anticipation.

But nothing is ever simple where Collingwood is concerned. So, in the hours before the club’s first ever practice match, the players found themselves in a debate over the captaincy that became so heated two players ended up in a fistfight!

The barney took place in the Yarra Hotel on the morning of April 16, 1892. The players had gathered there before their first practice match against the Clifton Hill Football Club, to get changed and walk across to the Darling Gardens, where the match was to be played. They had also set themselves to choose a captain.

But that proved no easy task. Two of the Britannia players who had thrown in their lot with the Magpies, Bill Proudfoot and Archie Campbell, ended up trading blows as they disagreed over who should be the club’s first leader.

When the dust had settled it was Alf ‘Dony’ Dean, a legend and former captain with Britannia, who led the Pies on to the Darling Gardens that day.

But the captaincy issue was far from settled. Two weeks later, Dean was dumped and replaced by another former Brit, Joe Delahunty. But Delahunty missed the first few weeks of the season, due to a combination of permit issues and illness, so Tasmanian George Watt had the honour of being Collingwood’s captain in its first ‘real’ matches.

The practice match against 23 members of ‘the Clifton’ (John Wren’s team) went well for Collingwood’s new team, the Pies winning by nine goals to three. Even better, they took in £20 at the gate to help the club coffers.

The Sporting Standard noted that the men who turned out for Collingwood for the first time were “big and muscular”, and included only four ex-Britannia players. Even more presciently, they noted the enormous public interest in the new club.

“There was unusual interest manifested as to the representation of the Collingwood, and long before the team made their appearance a large crowd of supporters were anxiously waiting,” the paper said.

In a neat twist, the first goal that day was kicked by former Preston defender Alf Toll. It was also Toll who, just three weeks later, kicked Collingwood’s first goal in its first official VFA game against Carlton.

Collingwood drew its second practice match, against 23 of the Rainbow team, and in its final hit-out against Collingwood Imperials the Imps gave up and went home after the Magpies kicked their first goal! If only our early experiences in the VFA had been so easy.