Magpies from over the border 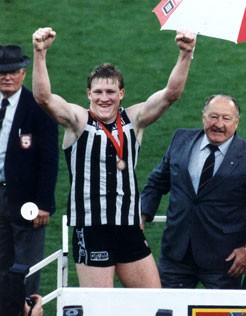 It’s rare that a SANFL grand final has interested Collingwood supporters, but that’s precisely what happened in October 1992.

Many Magpie fans had already switched their attention to Melbourne’s Spring Carnival at that stage, following the club’s brave elimination final loss to St Kilda a month earlier.

But for those black and white barrackers still wanting a footy fix, there was the clash across the border between Port Adelaide – the SANFL Magpies – against Glenelg.

Back then, the AFL version of Port Adelaide was still a few years away, and wouldn’t start until 1997, so it was logical that some Collingwood fans had a bit of a soft spot for the SANFL Black and White team.

Most of the interest level for that game came from the fact that a number of former Collingwood players were playing in that SANFL grand final, as well as a former Pies coach.

And a 21-year-old footballer who had been linked to the AFL Magpies also attracted his own share of interest. By game’s end, that interest level had escalated significantly.

The coach was John Cahill, who had been Collingwood’s coach in two seasons, from 1983-84, during the era of the New Magpies.

Cahill, a legendary coach in South Australia, had led Collingwood to a preliminary final in his final season, but a massive thrashing at the hand of eventual premiers Essendon convinced him to return home.

But he did encourage a few former Magpies to join him at Port Adelaide.

Former Collingwood captain Mark Williams had been a fan favourite at Victoria Park over 135 games from 1981-86. That came before his move to the Brisbane Bears.

Williams had started his senior football career in the SANFL before coming to the AFL, so it was logical that he would return to Port Adelaide when his league career was over.

Interestingly enough, he was one of four ex-Collingwood players chasing the SANFL flag that afternoon.

Bulky defender Greg Phillips was the captain for Port Adelaide for the game. He had been a star for the SANFL side before finally succumbing to the lure of playing for Collingwood, where he played 84 games from 1983-86. Again, like Williams, it seemed a natural thought for him to go home when his league career was over.

While some people doubted that Phillips had enough run in his legs that day to lift his side, the man himself never had any doubts.

Bruce Abernethy had already played in five SANFL premierships leading into that game. He had originally come to Victoria as a young footballer eager to make his mark at North Melbourne in 1982-83.

And he made his mark, too, in 58 games for Collingwood in 1984-86 before heading back to his home state to play 11 games for the newly-formed Adelaide Crows. He was chasing his sixth flag that day.

Paul Rizonico might not have had the same sort of profile as the other three, but he too was a Collingwood player during the 1980s. Touted as a future young star, and recruited from Bundoora, ‘Riza’ could only manage 17 games for the Magpies, with his last coming in 1988.

He would, however, take his football to South Australia, where he would become a very consistent footballer in defence for Port Adelaide.

And that 1992 SANFL grand final would be the first time a number of Collingwood fans would have a good look at a young man who would become one of the greatest players in the club’s history.

His name was Nathan Buckley.

Buckley was 20 at the time and had come to Port Adelaide a year earlier after a football career that had taken him to a few states and territories. He had just been announced as the SANFL’s Magarey Medal winner.

It’s fair to say that AFL clubs had been chasing him for some time, knowing just how good he was, and would become. Footy supporters in Victoria were a little less sure of his profile.

Collingwood had been “into him” for some time, while the Brisbane Bears had even listed him earlier in the year, using his time from the Northern Territory to take him as one of their zone players.

Buckley was reluctant to play with the Bears. That much was certain, and when he ran out for Port Adelaide that day, almost everyone in the Football Park crowd knew he would not be back the following year.

The only question mark was the location of his next move.

Collingwood? The Brisbane Bears? Or North Melbourne? Or perhaps even somewhere. Only time, and some delicate negotiations, would solve the riddle.

The young midfielder wearing the No.34 jumper was one of the first Port Magpies’ players to run onto the ground that day, and he even slipped past the leaders to be one of the first to break through the banner.

He was, quite clearly, a young man in a hurry. That eagerness continued after the opening siren when he attacked the ball immediately and managed to punch the ball to advantage with one of the game’s first touches.

Things didn’t look good for Port Adelaide or Buckley midway through the opening term. Glenelg had started well, and the young star looked to have injured himself, with his fitness looking decidedly shaky.

The Adelaide Advertiser recorded: “Buckley gingerly had moved away from the aftermath of a grandstand wing tackle, limping noticeably on his left leg. With Port languishing behind free-wheeling Glenelg, this might have been a godsend for Tiger supporters.”

But just as soon as Buckley’s day looked to be over, he showed a resilience that would become part of his nature. He not only got himself going again, but he started to get his hands on the ball with regularity.

Within a minute or so, that same journalist was saying: “Alas, Buckley is made of the purest steel … the chunky blond swept around three flat-footed opponents and embarked on a searching solo run.”

By the end of the first quarter, he had eight kicks to his name – with the newspaper saying “and (he) counted each of them” – and three handballs.

And in the second term Buckley started to make the difficult look “ridiculously simple”, as his side not only had fought their way back into the match, but also managed to wrest control of it.

He dominated the second half to the point where “his influence on affairs became so pronounced … that his nomination as the Jack Oatey Medallist (for best afield) became a mere formality.”

“The pity is, however, Buckley looks sure to have played his last game in the Port guernsey. If all goes to plan, the flying midfielder will be in black and white stripes next season – Collingwood’s.

“He had the good sense, though, before departing for the dreaded foe to leave his best until last.”

All went to plan in the game for Port Adelaide. Through the good conditions, and even more so during the rain that followed, the SANFL Magpies thrashed Glenelg to win yet another premiership.

And the plan for Buckley to win the best afield honours – which some of his teammates forecast was almost his destiny – was realised with ease.

But the plan for him to head immediately to Collingwood after that game would prove a hell of a lot tougher to orchestrate. In fact, it would prove too tough.

That’s despite the Advertiser forecasting that Buckley would head to Collingwood in season 1993 on a three-year deal worth more than $700,000.

It was even stated that three Collingwood players would be traded to the Bears – two youngsters who were supposedly on the rise in Paul Williams and Troy Lehmann, as well as another unnamed Magpie player.

But the Bears wouldn’t budge.

They forced Buckley to play the 1993 season with them, and what a season it was. He played 20 games, almost won the club best-and-fairest (some suggest he should have) and won the AFL Rising Star award.

By 1994, though, he would be a Collingwood player, and all of the hard work and bartering and trading from the Magpies would be worth it. And Lehmann, and 1990 premiership player Craig Starcevich, would be the men who would make way, heading to the Bears in his place.

He would not play in a premiership with Collingwood – despite his best efforts and a Norm Smith Medal – but that 1992 SANFL premiership would remain as one of the special moments of his life.

When the siren sounded, leaving Port Adelaide 56 points ahead, Buckley raised his two arms in triumph, as he would do so often later in Collingwood colours.

Then, as it sunk in, Buckley was in tears as he celebrated with his teammates. One of the Channel Nine commentators said: “He’s overwhelmed at the moment. Well, he’s had an overwhelming season.”

Soon after he was presented with the Jack Oatey Medal, and in the rooms after the game, he heaped all of the praise on his teammates for the way in which they helped through a memorable year.

“They have made me what I am. I have put in the hard work, but without these blokes, nothing would be possible,” he said.

Asked about the ‘magnificent goal’ he kicked in the second term, Buckley tried to stay modest, saying: “I don’t know if it was that good.”

Assured that it was by the interviewer, he them added: “I’m happy with that, then.”

Williams, who was playing his last SANFL game, said with great delight: “We might be slow; we might be old, but we were too good today.”

Phillips, who would play on for one more seasons, loved the wet conditions in the second half, saying: “The Lord must have helped me. I prayed for rain and it brought everyone back to my pace.”

Footnote
That wasn’t the end of the Collingwood-Port Adelaide link. Buckley was captain of Collingwood when another young kid from the Port Magpies arrived at the club after being No.3 pick in the 2000 national draft. Didak would go on to become one of the club’s favourite sons in 218 games, from 2001-13.