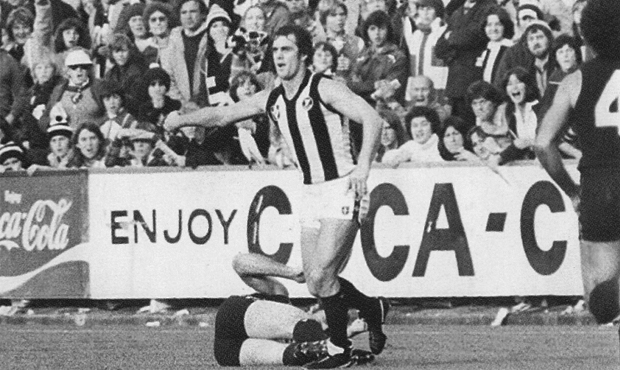 Alex Jesaulenko lays prone on the Princes Park wing after being cleaned up by Collingwood strongman Stan Magro on 9 June 1979. Image via blueseum.org

It was the bump that has long helped to define Australian football’s fiercest rivalry.

Even today, those who were there to see it live or those who have watched vision of it, still feel as if the earth had somehow moved.

To that stage, the relationship between Collingwood and Carlton had already stretched back almost 90 years, with a history of a conflict, intense competition, classic moments and more than a hint of venom.

Yet this collision of two footballers on 9 June, 1979, would go a long way to adding to the tapestry of the Magpies-Blues relationship, providing one of the most memorable moments between the old enemies.

Stan Magro, 24, was almost midway through his third season as a hard-nosed Collingwood player. He was playing his 48th game in Black and White.

Alex Jesaulenko was nine years older, and one game short of his 250th milestone. He had become a father for the third time a few days’ earlier and was 10 games into his role as Carlton’s captain-coach.

The round 10 match at Princes Park that year saw the top-of-the-table Blues take on the third-placed Magpies in a much-anticipated match.

It was the second quarter of the match when Collingwood held sway, and when the ball came out towards Jesaulenko on the outer wing.

For a moment, the pass looked to be too long before the courageous Blues veteran went back with the flight as Magro came in from behind him.

The solidly-built Magpie launched himself off the ground and crunched into Jesualenko.

Those in the crowd, including this writer, still recall the crunch the collision made.

There might have been 46,106 in attendance – the highest Carlton-Collingwood crowd at the venue and the seventh highest at the ground of all-time – but the noise of the bump gave off an almighty noise.

The Sun newspaper described the moment: “Play livened up as Jesaulenko and Magro collided on the wing. Jesaulenko flew for a mark and Magro, racing in on the Carlton man’s blind side, crashed into him mid-air. That hardly does justice to the impact.”

Channel Seven was the same.

Lou Richards summed it up almost in the footy vernacular, “Well, Magro got him a beauty …”

His co-caller Peter Landy said: “I’m sure it was accidental but it was a very, very solid hip and shoulder.”

When Richards came to write his column for The Sun for Monday’s edition, he added: “Jezza was flattened, knocked right out by a legitimate ‘shirt-front’ by Magpie back pocket Stan Magro.”

Jesaulenko was unconscious from the moment he hit the ground, acknowledging that it wasn’t Magro’s hip or shoulder that did it, but the hardness of the turf when his head crashed into it.

Both men would agree on one thing – that was how VFL football was back then, and there have never been any recriminations between them in the many years since.

Magro has long insisted Jesaulenko’s inherent courage was the reason for the incident.

He told the Herald Sun years later: “Alex’s courage caused the incident … at least 99 per cent of the players I’ve played against would not have gone for the mark.

“The ball was kicked too high for him and he ran backwards to take a chest mark. I came charging out and he kept coming. I bumped him with my hip and he flipped onto his head and knocked himself out.

“I was going to mark the ball, but he kept coming and took my area. I reckon I’d get 5-6 (weeks’ suspension) now.”

Rather than cop a stint on the sidelines, the only penalty Magro got was a free kick paid against him, and the wrath of both Carlton’s players and the rest of the Blues crowd.

“I remember going backwards to mark, after that I’ve picked up bits and pieces from the television replay,” he said.

“The concussion was caused when my head hit the ground, not by the bump.

“Magro and I have laughed about it since and really it was just a matter of being in the wrong place at the wrong time.

“If Stan hadn’t kept going, he would have been branded, as you were in those days.”

The Carlton great had been at nearby St Vincent’s Hospital two days earlier when his wife Anne-Marie gave birth to their third child, Kate. Incredibly, when the ambulance took Jesaulenko for medical treatment following the incident, he went to the same hospital.

Magro joked later: “I tell the story that I was thinking of Alex by allowing him to get to the hospital to visit his wife and baby.”

The crunch was initially followed by silence as players and fans alike feared for Jesaulenko.

Carlton’s ruckman Peter ‘Percy’ Jones described it as an eerie feeling: “When it happened, you could hear a pin drop. The crowd just went silent.”

Long-time Blues fan and respected journalist Peter Coster – who used to share a house with Jones – recalled: “There was a hush as if we had witnessed a death … Jezza only had eyes for the ball.”

Carlton’s Trevor Keogh, who would later be adjudged as best afield that day, recalled: “Magro didn’t get much wrong, except he jumped in the air when contact was made. I can remember going into the rooms when Jezza was lying on a bench.

“We were shattered about it. You have to remember this was Carlton versus Collingwood.”

From the moment the collision occurred, the angst between the two sides was turned up a few notches.

The Herald noted: “Players raced into an angry, milling group as trainers rushed to the prone Blues’ captain-coach. A trainer frantically waved for the stretcher and play was stopped while the unconscious Jesaulenko was carried 150 metres to the Carlton race.”

The Blues players who had come back into the rooms at half-time were fired up and threatening retribution. By that stage, Collingwood led by 29 points, and the game looked to be in the Magpies’ palm.

Both teams had started strongly, with 11 goals kicked in the first half hour – six to the visitors and five to the home side.

It was said: “the huge crowd was being treated to a fine football exhibition … (with) seven goals (kicked) in 13 minutes.”

In that first term Jesaulenko turned the clock back by dragging a mark that had some observers saying it bore a slight resemblance to the most famous mark of all – his grab in the 1970 Grand Final.

The Herald’s Bruce Matthews wrote: “Jesaulenko brought a roar from the packed crowd with a spectacular mark over (Mark) Hannebery in the centre … it was reminiscent of his famous mark over Graeme Jenkin in the 1970 Grand Final against Collingwood.”

Hannebery was the most inexperienced players that day, in only his second game.

Two youngsters from the northern suburbs were also in their VFL infancy – 19-year-old Denis Banks, in his fourth game, and 18-year-old Tony Shaw, in his 10th game.

It was a relatively young Magpies’ side.

Only four players had played 100 or more games of VFL football and only two had done so in Black and White colours – Phil Manassa and Bill Picken.

The total career games played for the Magpies’ side was 1126.

The Blues, in contrast, had played a total of 2039, with three 200-games, including Jesaulenko.

A brilliant second quarter by Magpies forward Rene Kink (three goals for the term) had helped set up the almost five goal lead for his team. And when Derek Shaw kicked his fourth goal, the margin was almost five goals.

But as damaging as it was for Carlton to have their leader off the field – and on his way to hospital – the incident had the effect of lifting the team.

As Ray Shaw said: “The problem was that it spurred the Carlton players on … Stan would probably get six weeks now.”

Tensions were high almost from the moment the two teams ran back onto Princes Park. One of the umpires had to caution defender Kevin Worthington and Blues big man Mike Fitzpatrick.

The Blues made their charge in the third term, but inaccuracy cost them from making an even bigger impression on the score line. Carlton kicked 3.8 to Collingwood’s 1.4, leaving the difference at 13 points at the last change.

Magro hadn’t finished being a part of the attention that day. A clash with Alex Marcou in the third term brought more ire from the Blues fans.

The Herald described it as “Marcou took a pass on the half-forward flank and Magro arrived late to crash into him. Incensed Carlton players flew in a milling pack which saw Magro, Fitzpatrick and another Collingwood player hit the turf.

“A goal umpire sprinted 70m to go to help the field umpires separate (the players).”

Magro explained: “I biffed him (Marcou) when he tried to take a mark. I wanted to make sure he earned it.”

“Part of the theory for doing that is when a player goes for a mark the next time he drops his head or takes his eye off the ball. Anyway, Marcou went down, Mike Fitzpatrick came in and knocked me down and then my mate Kevin Worthington ran in and knocked Fitzy to the ground. It was on for young and old.”

Sadly for the Magpies, the Blues were on a roll and they stormed home with a seven-goal-to-two-goal final term, which saw the home side prevail by 16 points – a 45-point turnaround from half-time.

Word was passed down to the Collingwood rooms after the game that the traditional after-match drink was not open, but not to Magro, who had twice infuriated the Blues fans.

“Did I stay for a beer at Princes Park?” Magro said.

“No, the word came down to our rooms that I wasn’t welcome.”

Ricky Barham, who did not play that day, said Magro did not flinch when the threat came from Carlton fans on leaving the ground.

“What I can vividly recall … after the game, we were walking out and half a dozen Carlton supporters wanted to beat him up, Stan just stuck his chest out and walked straight through them, and they backed off,” Barham said.

Magro knew that he had done nothing wrong by the letter of the VFL rules at the time, yet has long felt a bit frustrated that he is remember as much for the bump as for his consistent and courageous career in Black and White.