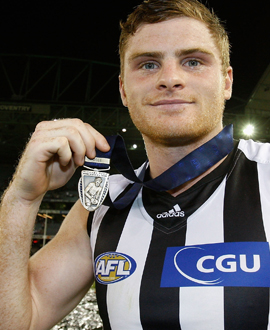 Heath Shaw proudly shows off the Michael Tuck Medal in 2011.

Since 1992, the Michael Tuck Medal has been awarded to the best and fairest player in the night/ pre-season series Grand Final.

It is named after Michael Tuck, the AFL games record holder who played 426 senior matches for Hawthorn between 1972 and 1991.

Heath Shaw is Collingwood’s sole recipient after the club’s 22-point win over Essendon in the 2011 pre-season Grand Final.