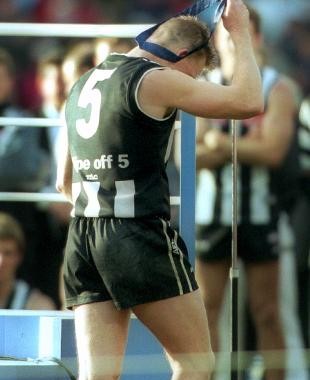 Nathan Buckley takes off the Norm Smith Medal after the 2002 Grand Final loss to Brisbane.

The Norm Smith Medal is presented to the player judged, by an independent panel of football experts, to have been best on ground in the grand final.

The Medal has been awarded since 1979.

Nathan Buckley is the only player who has received the medal in a losing Grand Final.

In 2001, the AFL Record named the players who were best on ground in the grand finals between 1965 and 1978.  A panel of football and media experts was selected for each year and asked to judge the best on ground.  Because there is minimal vision of grand finals before 1965, that was deemed to be the cut-off point.