Franklin will look to add to his 58 finals goals as he takes some of his hottest form into Saturday’s qualifying final against Greater Western Sydney.

And if the 29-year-old sticks to his finals average of 3.41 per game, and the Swans can play at least three finals, he could even rocket up to fifth on the all-time table of leading goalkickers in finals football.

Even then, Franklin’s chances of catching the man who had held the No.1 mantle in VFL-AFL history in terms of finals goals for more than 70 years – Collingwood champion Gordon Coventry – remains remote (albeit still possible), even if the Swan forward sees out the end of his very long contract.

That fact alone shows the enormity of what Coventry achieved, from his third game (which was his first final) to his 306th match (his 31st and last final).

In between, he kicked an extraordinary 111 goals in finals matches. 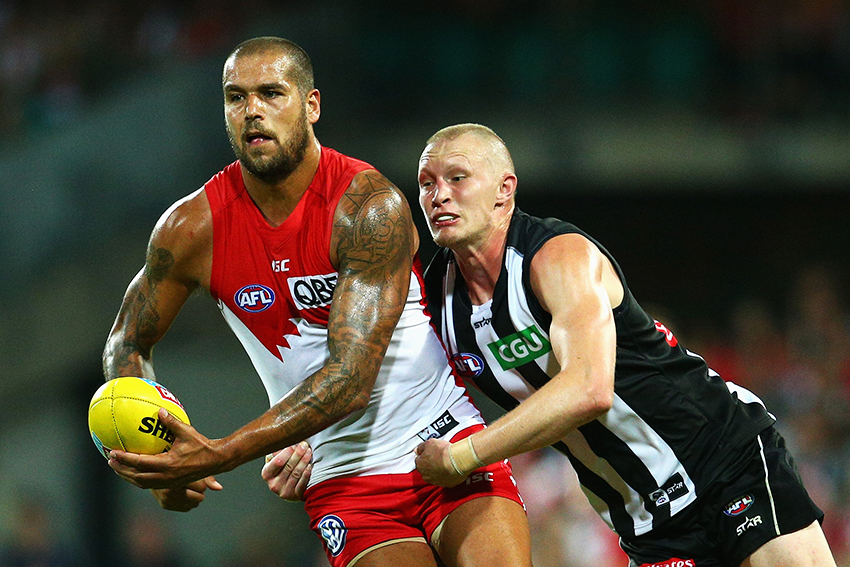 How close could Buddy get by the time his career is out?

And while Coventry held the overall league goalkicking record of 1299 goals until another Swan, Tony Lockett, broke through the 1300-goal barrier in 1999, his record in finals could remain his forever.

Even now, almost 50 years after his 1968 death, he remains 33 clear of his nearest rival Jason Dunstall (Hawthorn), 37 ahead of Jack Titus (Richmond) and 39 ahead of Leigh Matthews (Hawthorn).

Franklin is 15th overall, but has the capacity to make significant inroads up the AFL finals goals ladder in the coming years.

Coventry and Franklin couldn’t have been any more different in their on-field demeanour. Franklin is flamboyant, an extraordinary athlete and a raking left-footer; Coventry was a clinical goalkicking machine, efficient and effective, but as unassuming and unaffected as any champion could possibly be. 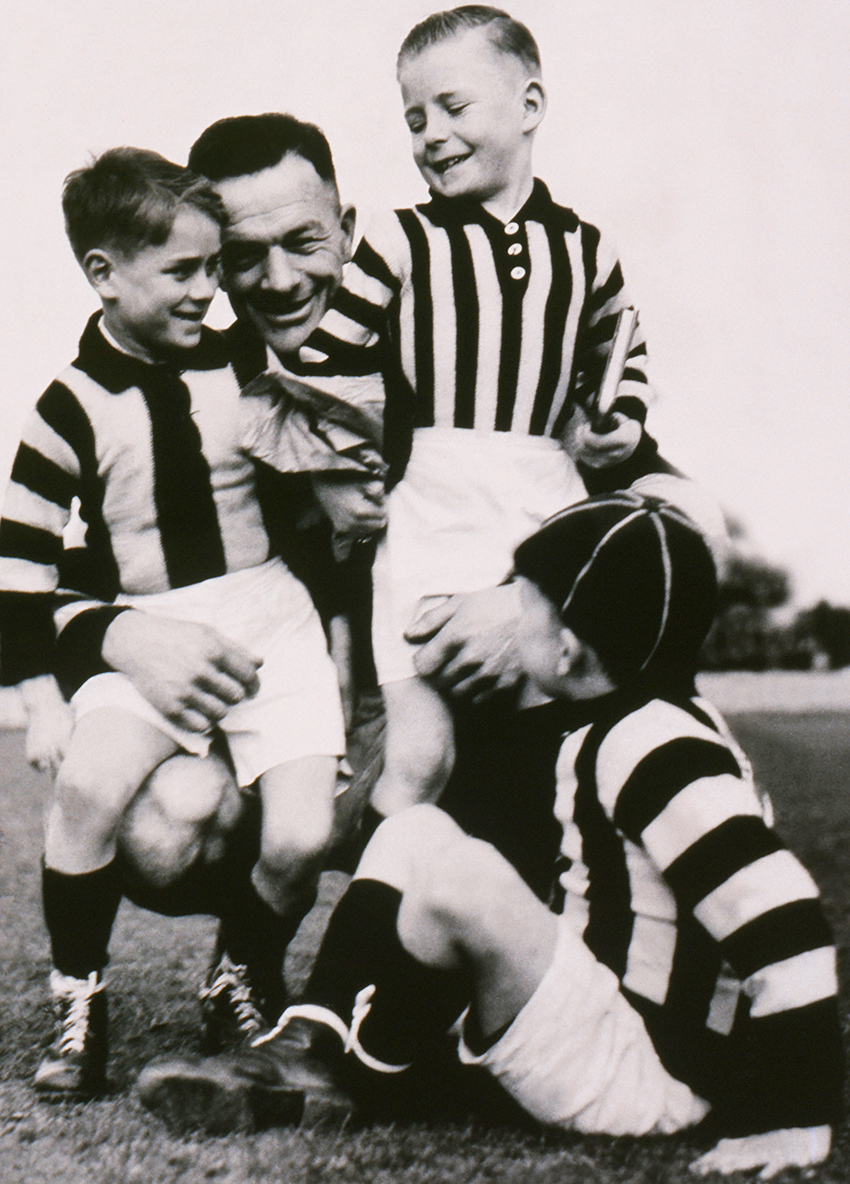 The great Gordon ‘Nuts’ Coventry is pictured with his family.

But off the field their goalkicking gluttony would put Coventry and Franklin at the forefront of the public’s imagination. Franklin has been feted for most of his AFL career, and while the impact of footy heroes during the 1920s and ’30s was very different to what it is in the 21st century, Coventry was one of the most identifiable footballers of his era.

In 1930, a cartoon of Coventry drawn by the Herald‘s Wells imagined him striding over to “the Australian record-breakers’ seat” occupied by cricket superstar Don Bradman and billiards whiz Walter Lindrum. In it, the Magpie said: “Move over cobbers, I’m in this.”

Coventry would never have said that. He was far too modest, but it was an indication of how he was seen by the general community.

Here are 10 important Gordon Coventry finals moments that helped him to a record that could last forever.

Coventry was a teenager from Diamond Creek with unusually large hands and a quiet disposition when he made his debut for Collingwood in Round 15, 1920. He kicked a goal in that first game and was subsequently dropped, saying years later: “I saw hundreds of young lads having their first League games thereafter, but none was as inglorious as mine.” His third game would come in a semi-final, in which he would kick a goal. But his breakout game came in his fourth match – in the preliminary final against Carlton. It came on the day of his 19th birthday, and he finished it with five goals from the Magpies’ tally of 12 in the win over the Blues. The Herald acknowledged what everyone in the crowd knew, that “Coventry … is coming much into notice as a sharpshooter.” He kicked three of Collingwood’s five goals a week later in the Grand Final loss to Richmond.

2. HANDING OVER THE BATON

Dick Lee, Collingwood’s great forward of the first two decades of the 20th Century, played his 230th and last game in the 1922 Grand Final loss to Fitzroy. He kicked two goals that day, one fewer than the young forward who was about to take over his mantle, Gordon Coventry. Coventry’s three goals were not enough to get the Magpies over the line against the Maroons, but it was a further sign that he was on his way to being an elite forward. That season, 1922, he would kick a total of 42 goals and win his first club goalkicker award. It was the first of 16 straight titles for his club.

After successive Grand Finals losses in 1925-26, there was extraordinary pressure on Collingwood to go one step further in 1927. In the lead-up to the Grand Final against Richmond, the game was almost called off due to a deluge of rain that flooded the MCG. The VFL allowed the game to go ahead, but a series of “miniature lakes” impacted on the game. Incredibly, only three goals were kicked for the entire match, and Coventry kicked two of them, one more than Richmond managed. As the rain bucketed down in the second term, Collingwood’s full-forward booted both goals during that quarter, and it effectively won the game for his team. It didn’t matter that the rain left him stranded on 97 for the season. He would break the century – the first time for a VFL player – two years later.

4. A MASSIVE RETURN TO FORM

Football writers were wondering what was up with Gordon Coventry ahead of the 1928 Grand Final. He had kicked only four goals in his previous four games, and had been held goalless in the semi-final replay against Melbourne. Coventry never told anyone at the time – and would only open up to his brother Syd a decade later – but he had copped whack on the back of his ear in a state match a few weeks earlier. “He would have dropped me out of the side, if I’d told him,” Gordon explained a decade later why he hadn’t told his issue to Syd. “A man at Collingwood in those days had to be really crook before he reported a crack.” Jock McHale forged a plan to give Gordon some space leading into the Grand Final, and used Percy Rowe to protect extra protection. It worked a treat. Coventry ended up kicking nine goals, a record for a Grand Final, as the Magpies secured back to back flags. It would stand as a record for another 61 years until a bloke named Gary Ablett equalled it – in a losing side – in the 1989 Grand Final.

Jock McHale tried something different leading into the 1929 premiership decider against Richmond. After the Magpies had lost to the Tigers in an earlier final – their only loss of an extraordinary year, the coach took a risk and decided to use his most prolific goalkicker, Gordon Coventry, as a decoy for another young forward from Diamond Creek. His name was ‘Tubby’ Edmonds, and he would boot a match-winning five goals. Edmonds was used deep near the boundary line in attack, while the opposition put much of its focus on Coventry, who still managed to kick two goals, but was content to play his “decoy” role as his team won a hat-trick of premierships.

It was somehow fitting that the Coventry brothers – dominant figures in the Machine side – proved so important in the climax to Collingwood’s record fourth straight premiership in 1930. Syd was dominant from start to finish, and was effectively a captain and coach on this day, in the absence of the sick McHale. But Gordon’s performance was just as critical. He kicked seven goals for the Magpies as the club overcame a big half-time deficit to streak away from the Cats as they created history. His seven goals made a total of 13 for his three finals.

Collingwood’s quest for a fifth consecutive flag ended in a massive 88-point defeat at the hands of Carlton in the 1930 first-semi-final, and it came with Coventry failing to kick a goal. It was the third and last time in his 31 finals that he would fail to kick a major. After kicking 23 goals in the previous three games (seven against Carlton, 11 against St Kilda and five against Melbourne), there was at least an excuse for his semi-final failure. He suffered a back injury and was lame, one of the many Magpies to be wounded on that forgettable day.

Carlton handed Collingwood another finals flogging – this time 75 points – in the 1932 preliminary final. But instead of being held goal-less, Coventry booted six goals. The loss wasn’t his fault. His tally was more than half the Magpies’ final total.

On the Thursday night before the 1935 Grand Final, one of football’s biggest sensations took place. South Melbourne’s star forward Bob Pratt was hit by a truck after stepping off a tram. It would cost him his place in the game, and his team any chance of beating the Magpies. Pratt’s counterpart, Coventry kicked four of Collingwood’s 11 goals as he secured a fifth premiership medal, with the Magpies winning by 20 points.

Coventry missed the 1936 finals – and a sixth premiership – after he was suspended following an incident involving Richmond’s Joe Murdoch, the only time he was reported in his career. But after briefly thinking about retiring, he made a comeback in 1937, and ended up kicking 72 goals for the year, and 16 goals for the finals series. He booted six against Richmond in a semi-final, seven against Melbourne in a preliminary final and three more in the Grand Final loss to Geelong. It wasn’t the way it was meant to end for Coventry, who turned 36 on the day of his final match. But after 1299 goals, and 111 in finals, it was the end of the road for the champ. 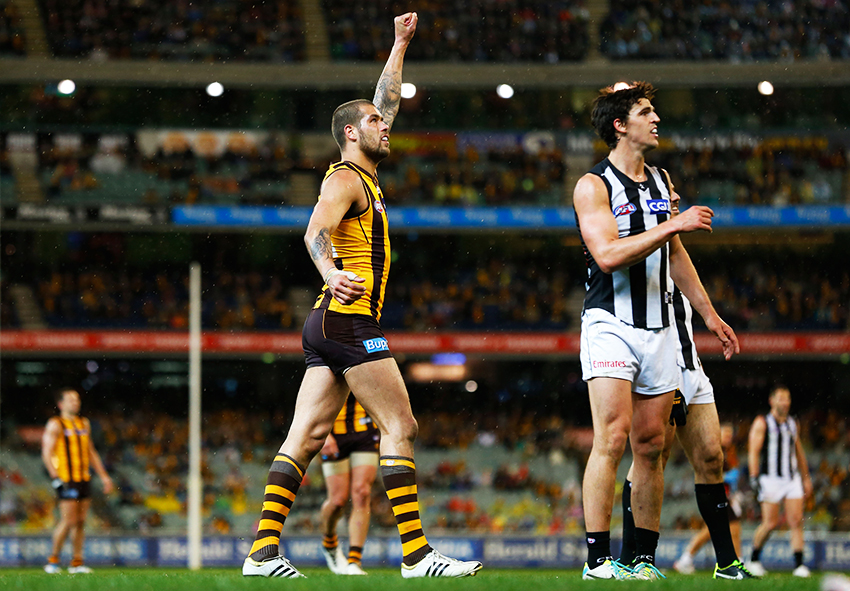