One Shot at Glory 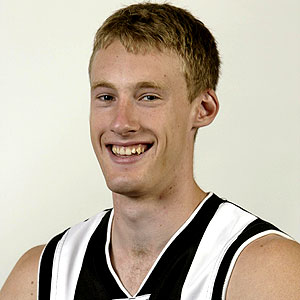 Ask anyone who has ever been lucky enough to play at least one senior game in Black and White, and they will tell their life has been changed by the experience.

In many ways, that’s the premise of the club’s new project, Collingwood Forever, along with the gathering of more current and former Magpies in the one venue than at any other occasion in the club’s history.

The first gamer
Dick Poole played in Collingwood’s first VFL game, and never played another senior game for the club.

It came in the opening round of the league’s first season as the 24-year-old from the Collingwood Juniors broke into what was the side that had won the previous year’s VFA flag.

Little is known about the 24-year-old who came into the side that day against St Kilda at Victoria Park, other than he played “half-forward” in the club’s 25-point win.

The Argus said when discussing the Magpies’ forward line that day: “Poole, a junior recruit, was commendably conspicuous in the panic division.”

A week earlier he had played in a Juniors team against the Collingwood VFL team in a practice match and it is safe to assume his performance that day at half-back led to his one and only senior game for the club.

He had won the “best play” award in an awards night in April, clearly for his work the previous year in the Juniors side, earning “a gift from Messrs Verey and Cross”.

Poole stood at 173cm and weighed 71kg, but never appeared again for the senior side. He would live until almost two months before his 67th birthday, dying on June 3, 1939.

The five-club players
Four men in the history of the game have played for five VFL-AFL clubs, and two of them have been one-game Collingwood players.

Both of them had the Christian name of Les.

The first was Les Abbott. He was born and bred in Collingwood, and would be recruited from the Collingwood Juniors, but he would take his football career all over the city.

Fittingly, he played his one and only game for the club against Geelong in Round 8, 1904, at Corio Oval. At least the Magpies won that July match by four goals.

Earlier that month he had impressed when he played in an exhibition match for Collingwood against Castlemaine during a mid-season tour, which earned his senior inclusion.

But Abbott would never again play for the Magpies.

A full-back or defender, who could also occasionally play in attack, he was one of Brunswick’s best players in the club’s Grand Final win in 1909.

The Brunswick Annual Report at the start of that season recorded: “Special mention should be made of Mr L. Abbott, in whom the club has found an excellent full-back.”

If Abbott had football wanderlust, then the same can be said for Les Hughson, whose brother Fred would later become one of Fitzroy’s greatest players.

Hughson would call himself a “tram footballer”, which referred to a player who regularly changed teams during the 1930s Depression years.

“We weren’t mercenary, but we had to play to live in those days,” Hughson would say years later about his colourful career. “When my form started to drop, I felt it was wise to move onto the next club.”

He was 19 when he played his one game for Collingwood, in round 13, 1927, and he would kick one of the club’s 18 goals in the 74-point win over Hawthorn at Victoria Park.

When he was appointed playing coach of Stawell in 1938, he was offered two pounds per week, and “as much free beer” as he could drink in the local pub. He led the team to the flag, but had to renegotiate the following year because the publican could no longer take such a big loss on the big-drinking, fun-loving footballer.

Langtree was only 17 when he played his one game, against St Kilda, at the Junction Oval in Round 12, 1900. The Magpies won that day by 25 points.

He had originally been from Warrenbayne in country Victoria, but he also attended Dookie College before being recruited to Collingwood as “an old boy” from Haileybury College.

But in June 1915, as the war was ravaging the world, Langtree left Melbourne for England “where he obtained a commission in the Royal Field Artillery” in the British Army.

Described as “a well-known footballer” who “at times” played for Collingwood, Lieutenant Charles Henry Langtree fought with distinction before dying of wounds at Corbie, France, on August 3, 1916.

He was 33. That was just a few days after his old side had beaten Fitzroy in the final round of the abbreviated 1916 season.

Campbell played his one game with Collingwood in round one, 1910, against Carlton at Princes Park. He was one of four debutants that day, as the Magpies went down to the Blues by 28 points.

Born in Ballarat, he was recruited to Collingwood from Spensley Street Methodists (Clifton Hill).

Eight years later, he joined the AIF, but sadly died of influenza before he could reach the theatres of war, on October 21, 1918 – in the dying days of the war.

Michael played one game for the Magpies, in round 10, 1906. He was 27 when he played his sole game against Fitzroy, being the next club debutant after Dick Lee, who was in his fourth game that day.

Lee would go onto a remarkable career; Michael would fade as quickly as he rose.

When he was ready to make his debut, the Maffra Spectator recorded: “It is likely that big Michael (he was 184cm and 83kg), who plays football with the Sale team, will soon be included in the ranks of Collingwood. He should make his presence felt.”

In an earlier match with Sale, it was said: “Michael was a tower of strength to his side, and his clean and effective work in the ruck, coupled with good long kicking, contributed largely to the victory.”

But sadly he could not replicate that form in his one match in Black and White.

The Gippsland Times explained: “R. Michael, the local footballer, played for Collingwood last Saturday, but (according to the ‘Age’) did not play brilliantly.”

The sports scientist coach
Dick Telford was a well-known distance running coach, sports scientist and Australian Institute of Sport pioneer. At times he would work closely with Robert de Castella, Lisa Martin, Andrew Lloyd, among others, at Olympic and Commonwealth Games level.

He also featured in a Kelloggs’ commercial during the 1980s.

Before all that, though, Telford was a Collingwood footballer. A talented young player, originally from North Reservoir who attended Northcote High School, he performed well at reserves level but could only manage one senior game during his time at Victoria Park.

That game came against South Melbourne at the Lake Oval in Round 9, 1966. His game time and impact would be at a minimum, with two handballs being his output in the No.34 jumper.

He would transfer to Fitzroy the following season, where he would play a further two games before a hand injury curtailed his time with the Lions.

But Telford would dominate in his time at Preston, where he won the 1968 Liston Trophy, as well as helped his team win the flag that season. He played with Preston for several more seasons with a far greater impact than at VFL level.

How did we let this bloke go?
A 19-year-old from Pearcedale played one game for Collingwood – sitting on the bench for most of the day and not recording a stat – in the final round of the 1966 season. It was against Footscray and he had to sit back and watch as the Magpies obliterated their opponents by 104 points.

He never got the chance to wear the black and white senior colours again, being overlooked as the club went into the 1966 finals.

Few people gave it much thought when he was offloaded to Hawthorn the following year.

His name was Ian Bremner. And when he finished at Glenferrie Oval after the 1976 season, he was a dual premiership player.

The half-back flanker would play 158 games for the Hawks, playing in the 1971 and ’76 flags, making him a “one that got away” player for Collingwood.

The day Diana died
Dwayne Griffin will never forget his one AFL game. And it won’t be the fact that he got through the match without having a touch on the day.

But the match will forever be recalled because it was the day that Princess Diana died.

The game was against North Melbourne, in round 22, 1997, and a pall came across the MCG that day when it was announced that Diana had been killed following a car accident in Paris.

Griffen played two previous seasons with Swan Districts before returning to that club after his short stint with Collingwood. He would play more than 100 games for the WAFL club and won their best-and-fairest in 2002.

The first round pick
If Danny Roach had made a success of his AFL career, he could still be playing in 2014.

What made it difficult for Roach was that he was that he had been a pick seven in the national draft of 1999. The Pies had very high hopes for his future.

In an issue of In Black and White following the ’99 draft, then recruiting manager Noel Judkins wrote: “He’s a very versatile player, and people would be yet to decide where his best position is going to be. He’s played on the backline, on the wing, as an on-ball runner and at centre half forward. He’s got a great vertical leap; his second efforts and ability to chase and tackle are very good. Strong overhead mark, but he’s got to work on his kicking.”

Unfortunately, Magpie fans would never get to see that kicking style in the seniors. His one game resulted in one tackle only, and no disposals.

Roach had several injuries during his time, including a serious hip issue, and when he retired at the end of the 2001 season, he also cited a lack of motivation to continue.

Something to Crow about
Anyone who plays at least one game for Collingwood has something to crow about. Justin Crow had that one game, plus a little bit more ground time than most in the years later.

He acted as the Magpies match day runner for a period of time five years after his sole game as a senior player.

The son of former Bomber, Saint and Bulldog Max Crow, he came from Oakleigh Chargers before joining the Magpies and making his debut as a 21-year-old in round 19, 2004.

His one game came against Fremantle at Subiaco, in what was Nick Maxwell’s ninth game. Maxy would go on and play another 199; Crow would never get another chance.

The Magpies beat the Docker by 33 points that night, despite kicking an inaccurate 14.22. And Crow had two kicks and one hitout with his two marks being contested ones.

Unfortunately, he never got another chance to wear the Black and White, but the good thing was that he was not lost to football.

Twice he won the club’s reserves best-and-fairest award, the Joseph Wren Memorial Trophy, and he later played with the Northern Bullants, as they were then.

He worked as a rehabilitation coach at Collingwood for three years before moving to Essendon, where he is now high performance manager.