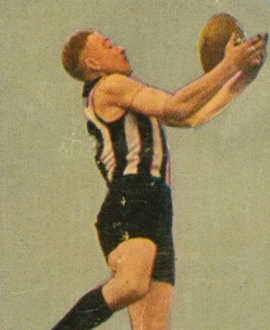 IN Collingwood’s long and celebrated history, there have only been two documented cases of Magpie players kicking goals after the final siren (or bell) to decide the outcome of a game.

Most of us will never forget the more recent of the two.

It came in 2003 when Chris Tarrant had the ball in his hands, with the game against Adelaide at AAMI Stadium resting on his left foot. With the Magpies one point down, Tarrant took a mark in the dying seconds and the siren sounded just before he came in for his kick.

The other instance came 68 years earlier at a similarly hostile environment, against Fitzroy, at Brunswick St Oval, albeit from a player who wasn’t as well known or recognised as Tarrant would be all those years later.

His name was Alan Ryan, and this Round 2 1935 clash would prove the high point of his 29-game, five-goal career with Collingwood.

Ryan had been recruited to the Magpies a year earlier, after playing 13 games with Melbourne from 1932-33, having originally come from Preston in the VFA.

The Magpies led for much of the first half in that match against Fitzroy, and by four points at the first two changes. But the Maroons booted six majors in the third term to open up a 13-point lead by three-quarter-time.

Desperate to get back into the game, legendary coach Jock McHale switched Gordon Coventry out to centre half-forward, giving a teenage Phonse Kyne a chance at full-forward. But as the Magpies worked to regain their lost ground, it would be the 25-year-old Ryan who loomed as an unlikely hero. He had kicked a goal earlier in the game and the 178cm half-forward turned in his best performance in black and white.

Scores were level late in the game after a goal to Vin Doherty, but Fitzroy’s Noel Fisher wrested the lead back for his team deep into time-on. The game looked lost.

But as The Age detailed: “Bounced in the centre as the timekeepers were ticking off the last few seconds, the ball was flashed forward to the Collingwood forward line where a terrific scrimmage took place.”

In the next passage of play, Ryan was “fouled” and umpire George Frood paid a free kick to him, much to the roar of disapproval from the Fitzroy crowd.

The Magpies were six points in arrears. The free kick would be taken “forty yards” out, but there were other difficulties apart from the distance – a swarm of fans had rushed onto the field after the final bell.

As The Age went on to explain: “With the umpires and a mounted trooper holding back hundreds of persons who had entered the area, Ryan, the Collingwood half-forward, who had been fouled a split second before the final bell, took his kick after time had been called.” Incredibly, the trooper’s horse made it more difficult when it reared as Ryan came in for his kick.

The stakes were high. A miss would see Fitzroy win the game. A goal would at least record a draw – and two premiership points – salvaging something out of the contest against the Magpies’ long-time rival.

Known as ‘Ginger’, owing to the colour of his hair, Ryan put his name in the record books with a drop kick that not only went the distance but was accurate enough to ensure this match ended in a dramatic draw.

It was, as one newspaper said, “one of the most exciting (games) of the season … the Collingwood men providing a sensational finish by levelling the scores with the lack kick of the engagement. Amidst terrific excitement, (Ryan) aimed accurately … and the beautiful drop-kicked goal levelled the scores, thus ending in a sensational manner a contest that had been packed with thrills right from the beginning.”

Ryan would only play two more games in that 1935 season. Five games followed in 1936, and again in 1937, before he closed out with nine games in his last year in 1938. He just couldn’t consistently maintain a spot in the competitive Collingwood side, with his last game coming in the 1938 semi-final win against Footscray.

But regardless of that fact, ‘Ginger’ Ryan would forever be recalled for the moment in which he held his nerve as the crowd swarmed around him and he kicked truly when the Magpies desperately needed him too.