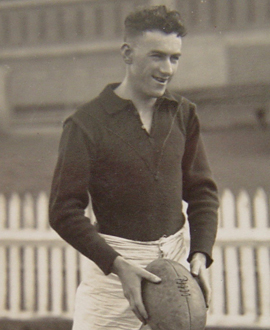 If you’re going to make a huge impact in your third – and last – game of VFL football, then you might as well make it a big one.

And that’s just what Charlie Ahern did, with a starring role in the 1929 Grand Final that proved to be one of the final acts not just of his career, but also of his life.

Charlie crossed to Collingwood from Northcote in 1929, landing straight into the middle of the most successful home-and-away season in VFL/AFL history. The Magpies did not lose a single game for the whole season, so places were hard to come by. Ahern managed a couple of games but left relatively little impression.

The same couldn’t be said of his performances in the seconds. He was strong, wiry and tough, and could “fight like a threshing machine”, as his wife would later recall.

That aggression came to define his football. Former teammate Len Murphy recalled a player who wasn’t overly skilled, but was “as tough as they come”. Ahern played mainly as a follower or defender, positions in which courage, physical strength and a willingness to continually put one’s body on the line were essential prerequisites. He had them all in spades.

Seconds coach Hugh Thomas was a big fan. And that became unexpectedly important after Richmond stunned the football world by smashing the unbeaten Pies in the semi-final. They did so using a lot of brute force, especially towards captain Syd Coventry.

Having watched his players being belted into submission in the semi, coach Jock McHale was in no mood to allow them to suffer the same result in the Grand Final. So he went to Hughie Thomas and asked him for his roughest, toughest player to help protect Coventry. Thomas recommended Ahern in a flash.

Ahern played heroically on Grand Final day. Early on he was twice badly fouled by Richmond in incidents that were severely criticised by journalists. He responded by launching a long punt kick after an early free kick that set up a goal. Ahern continued to soldier on manfully throughout the game, protecting his captain at every turn and taking a battering in the process. Wherever Coventry went, Ahern went too, acting as a kind of human shield and dishing out plenty of pre-emptive strikes as well. He also managed to get a bit of the footy too, taking a number of marks and making some telling contributions.

With Syd Coventry free to play football and the unheralded ‘Tubby’ Edmonds kicking five goals up forward, the Magpies won by 29 points, having broken away in the first quarter and held on thereafter in what was an often brutally hard game of football.

It was later revealed that Ahern had fractured his arm during the game, but he played on without complaint. (The break couldn’t even stop him playing the piano at the post-match celebrations!) In the rooms after the game he was lauded by teammates for his gutsy and selfless contribution. Syd Coventry himself singled out Ahern’s performance above all others for praise, lauding his “fine game” in his post-match speech.

But Ahern would get little opportunity to revel in his moment of footballing glory. He was hospitalised after the game due partly to his fractured arm and partly to the general soreness he was suffering. He became sick soon after, and within a few months was listed as ‘seriously ill’. He never played another minute of football, and was dead within 18 months.

It was long believed that his broken arm had become infected, which had in turn led to his death. But the official causes of death were listed as a combination of bowel cancer and ‘exhaustion’. He was just 25.

Various members of Charlie’s family for years blamed certain Richmond players, and the pummelling they subjected Ahern to on Grand Final day, for his death. His former Magpie teammates tried the best they could to help out his remaining family members, especially his brother Joe, who was a local tailor.

To have a football career cut short after only three games is sad. But having a life cut short after just 25 years is a true tragedy. That’s the fate that befell Charlie Ahern, an honest, hard-working footballer whose one big moment in the sun came at a terrible cost.