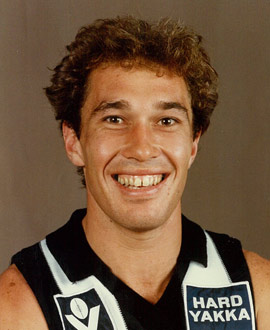 by Glenn McFarlane, of the Herald Sun

David Twomey carried one of the most famous surnames in the history of the Collingwood Football Club through a 63-game career across seven seasons. But he is best remembered for one daring moment where he carried the ball almost half the length of North Melbourne’s Arden Street ground before kicking one of the goals of the season in 1981.

It came on a wet afternoon in the Magpies’ Round 9 clash with the Kangaroos. The 20-year-old defender, playing his 19th VFL game, took possession of the greasy Sherrin from teammate Michael Taylor and found himself in space. He launched himself into a great run down the field. He bounced the ball three times – each time it slid on the slippery surface before coming back within his grasp – then let fly with an incredible long goal.

The Age‘s Trevor Grant called it an inspirational goal that helped lift the Magpies to victory, and a moment in which a young Collingwood hopeful shone brightly amidst the gloomy weather.

“(Twomey’s) best-on-ground performance on Saturday set him apart as one of those polished defenders who is always thinking a step ahead,” Grant wrote. “His running, accurate handball and thoughtful long kicking made the forwards’ jobs so much easier.”

“One of those runs will be remembered for a long time. Twomey took the ball on the half-back line and weaving his way past several North players, charged down the outer side of the ground. After three bounces over 60 metres, he let fly with a 50-metre flat punt which found the goals.

“It was much more than the goal of the year; it also gave Collingwood the lead at the 20-minute-mark of the third quarter and the inspiration to stay in front from then on.”

Twomey had a rich family connection to Collingwood. His grandfather, Bill Sr., an outstanding foot runner, had played 54 matches for the club from 1918 to 1922, before going on to win the 1924 Stawell Gift. His three uncles, Bill Jr., Mick and Pat, had all played in the club’s 1953 premiership side, making significant contributions to Collingwood.

David’s father, Peter, hadn’t played for the Magpies, but he had been a highly-competitive suburban player with Heidelberg in the Diamond Valley Football League. But his link to the club would come through his son, who attracted the interest of recruiting scouts nice and early in his career.

David first played football as an eight-year-old with Heidelberg Colts under 10 sides.

In an interview years later in a South Australian newspaper, he would recall: “The senior team at Heidelberg Colts would be allowed in the league one year but not for the next three. They only were allowed in again when they behaved themselves. Some of the dads watching the kids in the under-10s were pretty brutal as well.”

It was a rough and tumble neighbourhood, and Twomey would joke late: “Let’s just say you carried your pocket-knife at primary school to protect your own lunch money.”

Twomey’s father encouraged David to switch to a more clean-cut club, and they found one in West Heidelberg YCW. He attracted plenty of interest there as well as when he later played with Ivanhoe Amateurs, which led to an invitation to join the Collingwood under 19s.

It was there, in the Magpie thirds, that Twomey won the nickname he carried for most of his time at Victoria Park – ‘Tickets’. “When I playing under 19s, I was called ‘Tickets’, mainly because I was pretty confident in my own ability,” he said. “I have been tagged ‘Tickets’ in a good way, not as a player who was a big head, but as a player who has a bit of humour when he boasts about his ability.”

He came to Collingwood as a forward and kicked 53 goals in his first full season in the reserves, with his uncle Mick often making the trip up from Portland to watch him play.

Twomey was included for his first game – as one of the bench players – for the Round 16 clash with Footscray in 1979. He was only 18, telling The Age on the eve of that first match: “I don’t care where I play so long as I am in the team.” He only had five disposals in that first game, and played two more games that season.

Seven games came for him in 1980, including the preliminary final against Geelong – his 10th in total – but he was omitted for the Grand Final with Ricky Barham replacing him.

But a switch to defence proved the catalyst for Twomey’s best season in 1981.

Grant said of him: “Youngsters like David Twomey let their football do their talking. Twomey … is a fine example of what persistence can achieve in football. He came to Victoria Park as a forward, but after two seasons in the under 19s and reserves, and seven senior games (in 1980), the Magpies’ selectors believed he was not good enough to make the grade in attack. He was tried as a defender at the start of the season, knowing if he failed; it was back to Ivanhoe Amateurs.”

He played 21 games for the season, and played a significant role in the Magpies’ finals campaign. He was one of the club’s better performers in the losing Grand Final side to Carlton, named as the Magpies’ third best behind Bill Picken and Mark Williams.

Injuries cruelled his next two season, as he managed only three games in 1982, and seven in 1983. But he managed to get his body right, and his form flowing in 1984, playing 21 games. He was a member of the club’s finals series that season, and also polled six Brownlow Medal votes.

His 63rd and last game for Collingwood came in 1985, before he transferred to West Adelaide the following season, playing