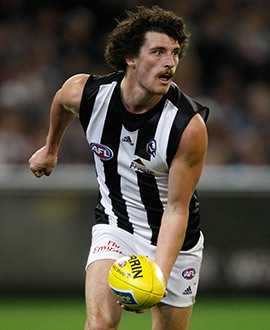 AS far as league debuts go, it’s difficult to think of a better father-son first-up double-act than that produced by Collingwood’s Ricky Barham and his son Jaxson 32 years apart.

Ricky Barham was a 19-year-old from South Warrnambool when he kicked five goals in his first game for the Magpies in Round 6, 1977. If there had been a Rising Star weekly nomination in existence back then, there would surely have been protests at VFL headquarters on the Monday afterwards if Barham hadn’t gained the nod.

Jaxson was a year older than his father when he played his first game, in Round 4, 2009, but his impact was almost as noteworthy. He had 28 disposals, played on and matched Brisbane Lions triple premiership player Luke Power, and it was no surprise when he won the weekly Rising Star nomination a few days later.

The difference was that while Ricky went on to a 151-game career, Jaxson would manage only seven career matches for Collingwood – something few would have believed after his game-one effort at the Gabba.

The unusual spelling of Jaxson’s Christian name came about when his mother went for something a bit alternative because she didn’t want him being called “Jacko”. That didn’t work, for when his Collingwood teammates started searching for a nickname; they unknowingly settled on the one that his mother didn’t want.

Jaxson spent his early years in Barwon Heads before moving to Melbourne. He then attended Geelong College in his last two school years, before coming under the notice of recruiting scouts at Lorne, and later Geelong Falcons.

For a time, though, surfing played almost as an important role in Jaxson’s life as football.

He was, according to some reports, “showcasing his breakneck speed off half-back” in his time with the Falcons, playing as one of the beneficiaries of the rule allowing a handful of players to play a year older in the TAC Cup, which suited the late developer.

“Without the rule I guess I would still be playing footy at a local club like Lorne or Barwon Heads and doing my (graphic design) course and just cruising,” Barham said.

“I have spoken to a few people who didn’t have the physical or mental maturity and (the rule) helped them out, so it’s a great opportunity for people.”

He impressed enough to be picked up by Collingwood under the father-son rule – as pick 61 – in the 2007 national draft, with Herald Sun describing him as “a medium midfielder who plays in the style of his father, Ricky.”

Jaxson would often watch a highlights package of his father before some of his early matches with the Falcons.

“It was one of my routines – there was a 20-minute highlights video of him, and I would always sit down and eat brekky and put the video on while I was getting ready,” he told the Herald Sun after being drafted.

“My game is pretty much the same as his – I play so similar to him, and I always watched that before a game.”

Fittingly, he was presented with his father’s No.43 jumper when he arrived at Collingwood, saying: “I would have been happy with any number, but it’s exciting to wear that number.”

“I told the family and Dad was just like ‘That’s amazing’. When I first rocked up it was kind of a bit scary, but everyone is really nice. It’s going well.”

His Magpie coach Mick Malthouse said at the time the club had wondered if he loved the game enough given his passion for surfing was so strong.

“Quite frankly, I watched Jaxson play a couple of times and there were areas where I was worried about whether it was football or (surfing that he preferred).” Malthouse said. “His previous five or six years or probably longer, he was into surfing. But he really has dedicated himself to being a footballer.”

Barham had no luck in the 2008 season, having suffered a broken shoulder in a preseason game, and later having his tonsils removed before working hard in the VFL side.

It wasn’t until 2009 that he won his chance, for that clash with the Lions at the Gabba, and what a debut it was.

His 28 disposals exactly matched his opponents’ tally, but he also had nine tackles (many of them laid on Power) and six inside 50s. He also stood out that night with a shag of black hair and a moustache that wasn’t dissimilar to what his father had worn during his career.

“I don’t think it is an accident that he played like he did,” Malthouse said after the game. “Because he has really dedicated himself to listen and understand the game.”

“As much as he shared the ball with Luke Power … given it was his first game he was excellent. He did something which I suppose, when we first recruited him, we would never have had in mind.”

In the afterglow of that first game, it seemed a long career was ahead for him. Sadly, that was not to be. He played four games in a row, including an Anzac Day game, but never again matching that first-up possession tally.

He lost his spot for a period in what was then a highly-competitive Collingwood team. But he returned for the Round 17 game against Carlton, kicking his one and only goal in black and white. He kept his spot the next week too, playing once more against Brisbane where he had 19 touches.

Barham struggled to make an impact during Collingwood’s highly-successful 2010 season. He did play one game during the season in the Queen’s Birthday draw against Melbourne.

That was seventh and final game for Collingwood. He was delisted at the end of that season, his short but noteworthy AFL career over not long after it began in such spectacular fashion. “I took it on the chin because that’s what happens in footy, and I have moved on,” a philosophical Barham would say.

He played for Geelong’s VFL side, and local footy down in the Bellarine area, including with Lorne.

It was a short ride for him at Collingwood – three seasons in total and only seven AFL games. But he won’t be forgotten due to his famous surname and that memorable debut at the Gabba in 2009 which proved his high point.