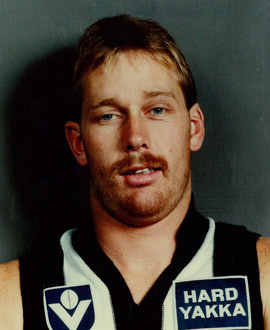 Jim McAllester was considered a football journeyman when he had his “moment in the sun” for Collingwood midway through the 1984 season.

He had already played for two other VFL clubs – two games with Essendon in 1980 (without gaining a disposal in either as he spent most of the time on the bench) and 24 games across two seasons for Footscray in 1981-82. He then had a season with East Ballarat in 1983, attracting the interest of the Magpies after being a part of the Ballarat Football League side that had swept the field to win the country championships.

Still, there were few expectations when Collingwood gave the rising 25-year-old a third chance in 1984 to rekindle a league career that had barely got warm beforehand. A utility in the true definition of the word, the 190cm McAllester could play in a variety positions in attack and defence, and was even known to occasionally fill in as an undersized but competitive ruckman.

He performed well in the preseason matches, leading coach John Cahill to select him for the club’s round one 1984 clash with Melbourne at Victoria Park.

The other new Magpies alongside him that day were Bruce Abernethy from North Melbourne, much-talked about Queensland sharpshooter Dale Woodhall and 18-year-old Mark Beers, son of premiership Magpie Brian Beers. Wearing the No. 46 jumper and sporting a beard he would become known for, McAllester had two kicks for two goals that afternoon.

He played seven of the club’s first eight games in 1984, kicking goals in all but two of them, including 3.4 from 14 disposals against North Melbourne in round six.

But McAllester lost his place in the team, and wasn’t recalled to the senior side until the round 14 clash with Sydney at the SCG. It would prove a momentous game for him, and a controversial one for the Swans.

Incredibly, on the eve of that game, Swans’ coach Ricky Quade had been rushed to hospital after collapsing, and Barry Round was believed to have been forced into retirement. Quade would never coach again, while Round would make his return to the team.

It was later revealed a personal rift between the two had been the cause of the issue, leaving the club’s chairman of selectors Tony Franklin to take charge of the team that day against Collingwood before a more permanent replacement (Bob Hammond) could be found.

There would be Magpie connections – past and future – in the Swans’ line-up that day. One of Collingwood’s favourite sons, Bill Picken, wearing the No. 14 jumper, played his 10th game for Sydney, having earlier played 217 for the Magpies. No one knew it then, but he would return to Victoria Park before his career was over.

Paul Hawke, one of the Swans’ best players that afternoon, would one day become a Magpie, as would Greg Smith– dubbed ‘the Bionic Man’ for his capacity to play hurt.

It was Peter Daicos’ 100th game of football, so there was plenty of incentive for Collingwood, not to mention the fact that the Magpies hadn’t beaten the Swans at the SCG leading into the game.

McAllester, originally recruited from Moonee Imperials to Essendon’s under 19s in 1977, had only kicked 13 goals from his 33 VFL games to that point of his career. But on a day when he became somewhat of a cult figure – however briefly – for Magpie fans watching the game on television, he produced a remarkable effort in attack to help win the game for the Magpies.

In the first term the Swans, held a narrow lead. But after Picken suffered a hamstring injury in the second term, it put more of a strain on the Sydney backline, and that allowed the Magpie forwards, including McAllester, to impose themselves on the game.

Almost as soon as Picken went off, McAllester kicked a goal to put the Magpies in front for the first time and they jealously guarded the lead for the remainder of the match. By the 19-minute-mark of the second term, the Magpies had shot out to a three-goal lead after another goal to McAllester, who was having a day out.

Relatively strong overhead and a reasonably accurate kick, he ended up kicking a match-winning 7.1 from his 12 disposals as the Magpies went onto win by 31 points.

It wasn’t enough to win a Brownlow vote, but he was listed high up on Collingwood’s best players list. The Agelauded his “superior work” in attack while another newspaper said he was “the most outstanding Magpie”.

The game, however, wouldn’t prove the career turning point that some might have expected. Incredibly, McAllester would play only two more games for Collingwood following his seven-goal feast against Sydney.

He kicked two goals the following week against Carlton at Waverley – one from a fine mark that is still featured on YouTube. Then in his 10th and final game for the Magpies – his 36 VFL game overall – he had only two touches against Melbourne in the round 20 game.

McAllester missed the finals that season, and couldn’t crack it for a senior game in 1985, playing in the reserves. He tried to return to the club which had given him his first shot at VFL football – Essendon – in 1986, but Collingwood put a $20,000 transfer fee on his head, which the Bombers rejected.

McAllester was delisted early in the 1986 season along with three other players – Graeme Allan (who would become football manager), Glenn McLean and Allen Eade – as the near-bankrupt Collingwood desperately sought to slash costs to stay afloat.

Another person with the same surname, albeit spelt differently, Allan McAlister would become president of the club at the same time as Jim McAllester was departing.

McAllester stuck with the Black and White jumper, playing for Brunswick in 1986 and 1987.

It wouldn’t be until 1989 that McAllester finally won an undisclosed private settlement with Collingwood for a breach of contract in 1986 after an out-of-court settlement. That wasn’t the end the popular McAllester deserved after having worked so hard to make a fist of his league career at his third attempt, culminating on the day he upstaged Warwick Capper and the Sydney Swans with seven goals in 1984.