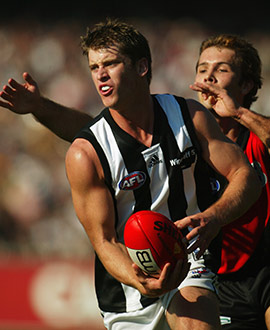 FEW Collingwood players have been so intrinsically linked to one individual game as Mark McGough will forever be to his 2002 Anzac Day performance.

McGough may have played 37 games for the Magpies across three seasons – and a further 12 for St Kilda – but when anyone thinks of the chunky young footballer with the shuffling gait and uncanny knack of finding the football, it always comes back to his second AFL game.

It is easy to understand why.

He was only 17 and a student at Northcote High School at the time. Given his age, he was still a few months off having his driver’s licence, and had to hitch a lift to the Anzac Day clash with his teammate Anthony Rocca.

Yet by the end of the game, Collingwood had not only emerged victorious against Essendon on a wet and wild Anzac Day, but McGough stood head and shoulders above the pack. He had 24 disposals, revelled in the conditions, and was adjudged the Anzac Medallist in front of 84,894 fans.

Five days earlier, on debut, McGough had received two Brownlow votes, for his two-goal 22-disposal effort against Hawthorn. He got the full three votes on Anzac Day, making him one of those rare footballers to poll Brownlow Medal votes in each of his first two matches.

Few people saw that start to his career coming, even those who had recruited him the previous November, when drafted with Collingwood’s third pick – and 43rd overall – in the 2001 national draft. They knew he wasn’t a new-age athlete-turned-footballer. The kid from Mulwala – or more specifically Bundalong, the tiny town that sits at the junction of the Ovens and Murray Rivers – was a pure in-and-under player.

The man who plucked him from the Murray Bushrangers – largely off the back of stopping job he did in the TAC Cup on another kid called Luke Hodge – was Noel Judkins, and he recalled later: “We were desperately looking for someone who was good at stoppages, good with his hands, and pretty hard at the ball.”

McGough had always dreamt of playing the game at the highest level. His father explained: “It’s been his ambition to play AFL footy since the age of two. He made the kindergarten teacher go and buy him a footy because he just had to have a footy at kinder.”

His maturity and strong body helped with his introduction to AFL football, even if his youth meant he had to balance his game around his studies, doing three Year 12 subjects at Northcote High School. He had to do early morning skills sessions at a local park with the club’s development manager of the time, Adrian Fletcher, so he could attend classes.

McGough settled in well at Collingwood, and Victoria Park. His form in the reserves was good early in the 2002 season and he won elevation for his first game in Round 4 against Hawthorn – at 17 years and 302 days old.

After his first-up performance, as second best on ground to his captain Nathan Buckley, there was never any doubt about him playing on Anzac Day – in the eighth version of the Collingwood-Essendon April 25 clash.

He started on the bench and spent most of the first quarter on the pine.

Essendon’s Jason Johnson started well, and coach Mick Malthouse needed someone to come on and curb his impact. McGough got the job, and never looked back.

Teammate Scott Burns would say of McGough: “He just knows where to get it (the ball). He’s one of those blokes that gets in the right spot. He hits it hard and is relatively clean with his hands.”

The Magpies kept the previous year’s Grand Finalists Essendon to only four goals, while kicking nine themselves to win the match by 33 points.

As the rain beat down, McGough was interviewed after the match by Channel Nine’s Anthony Mithen, saying: “It was just magnificent to get the win, in front of all these people. It has been a dream ever since I was a kid to play league football and to play for the Collingwood Football Club. It is fantastic.”

It was no surprise when Craig Willis soon after announced McGough had won the Anzac Medal. He got a pat on the back from president Eddie McGuire and coach Mick Malthouse as well as a firm handshake from RSL president Bruce Ruxton when he received his medal.

Drenched but delighted, he caught up with his family in the rooms after the game as well as some friends who had driven down from his home town.

“I don’t think it’s sunk in yet that I am even playing league football,” McGough said. “I hoped to set my sights on playing a few senior games this year. I’m still coming to terms with it myself, to be playing out there on ANZAC Day for Collingwood is a dream come true.”

He said the reality would set in the following day when he had to go back to school, which he duly did after a recovery session.

Asked about the teenager’s performance, Buckley said: “(He’s) a champion.” Then he checked himself: “Oh, I can’t use that lightly. He’s a champion bloke, and after two games he looks like he could be a champion player.”

Sadly, it didn’t quite pan out that way for McGough. He played 17 games in his debut season, but was out of the team by the time finals came around. He could muster only eight games the following year, laughing years later that his second Anzac Day game wasn’t as memorable as the first.

“Paul Barnard had a shot for goal from 30m out and I made the assumption he would make the distance and kick it,” he recalled. “He didn’t and it left Paul Licuria one out with three Essendon players, James Hird kicking the goal while I was walking back to the middle. Mick (Malthouse) reacted by throwing a white board at me.”

His third and final Anzac Day clash came in 2004, and he had 29 disposals and kicked two goals, receiving two Brownlow Medal votes in a losing team.

It was, however, McGough’s last season with the Magpies with his lack of leg speed counting against him. He was delisted at the end of 2004, and played two seasons with St Kilda before his AFL career was over at 22.

Still, those who were there that Anzac Day in 2002, or who watched the game from their living rooms, will never forget what the kid in the No.27 jumper was able to do in only his second match.