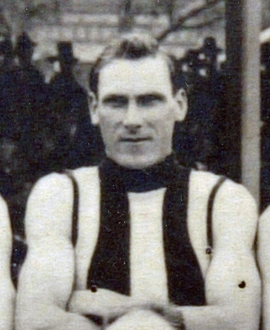 Players don’t always get to choose how, or when, the leave the game. But if they could, just about everyone would want to end their time at the top by going out the way Percy Rowe did – with a career-defining performance that helps your team win a Grand Final.

Rowe was at the end of his second stint at Collingwood – he’d spent several years in the country in between – when he turned on the greatest display of what was already an impressive career.

That career included 96 games, 37 goals, interstate representation and even a short stint as captain. But nothing ever outshone his heroics in the 1928 Grand Final – a performance so influential that the game eventually became known as “Rowe’s Premiership”.

Rowe was a big, strong follower with massive forearms and shoulders who loved nothing better than throwing his weight around. A product of Rutherglen, he didn’t make his VFL debut until the relatively old age of 24, but within a few years had won such respect from his teammates that he was elected captain (an honour he rejected after just three games, saying it was affecting his form).

He was regarded as one of the best – and certainly one of the most feared – big men in the competition, but left to pursue some lucrative country coaching opportunities after the 1923 season. He returned to Victoria Park in 1927 and played a key role in that year’s flag, the first of the famed four-in-a-row.

He was good again in 1928. But even so, nobody could have predicted the impact he would have on that year’s Grand Final against Richmond.

Collingwood struggled late in the 1928 season, and Gordon Coventry was finding the going especially tough. The Pies had drawn their semi-final with Melbourne and won the replay by just four points. Coventry had been hit with flu and, in his weakened state, found himself being swept off his feet in the crushes. With Coventry below par, the Tigers were flag favourites.

But Percy Rowe had other ideas. He asked to be placed alongside his good friend “Nuts” in the forward pocket, and promised that nobody would lay a finger on him all day. As they strode to their positions at the start of the game, Rowe turned to Coventry and said: “Nuts, if you don’t break the record for goals kicked in a final today, I won’t speak to you again.” When Coventry replied that the Richmond defenders might have a say in the matter, Rowe just growled: “By the time I’ve finished with them they’ll be wondering what fell on them”.

As the game progressed, Coventry realised he was taking a lot of his marks virtually uncontested. What was happening behind him was that Rowe was blocking, bumping and harassing any Richmond defender who looked like getting near the Collingwood spearhead. And he did it with an approach so aggressive that even some of his own players could see how increasingly uncomfortable the Tiger defenders were becoming.

Percy Rowe (left) and Gordon Coventry go for the ball in the 1928 Grand Final.

Rowe virtually ignored the ball and concentrated only on clearing a path for Coventry. Richmond’s backmen became more and more frustrated, and devoted most of their attention to Rowe, but his indomitable courage and determination did not give; the giant man just grinned and took it all. At day’s end Rowe was black and blue but Collingwood had won the flag — and Gordon Coventry had kicked a record nine goals.

Coventry said later that Rowe’s performance was a revelation. “No one thought it possible for one man to shoulder such a burden, but Rowe thought lightly of it,” he wrote in The Sporting Globe. “Rowe gave the finest match-winning effort ever seen. The final scores were 13.18 to 9.9, but they could have been reversed only for Percy Rowe. He won the pennant for Collingwood lone-handed.”

Richmond knew it too. Years later, when Rowe’s son Des was in the early stages of his great career at Tigerland, he asked for a clearance. A Tiger official bluntly refused, telling Des that his old man had cost Richmond a Premiership, and they were not going to give his son a chance to do the same!

For Percy Rowe, it was his last hurrah in a Collingwood jumper. The man who was as quiet and unassuming off the field as he was terrifying on it, quietly headed to Northcote to coach in the VFA. He turned out to be a good coach too, regarded as “a born leader of men”, and after Northcote had stints in charge at Fitzroy, Carlton and Coburg.

But nothing he did ever surpassed that 1928 Grand Final. It was a truly memorable way in which to end a splendid League career.