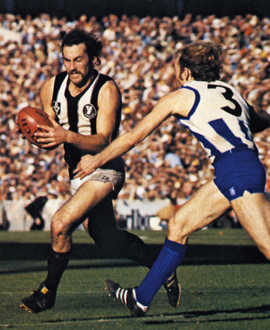 It’s a bit rough on a player who played more than 100 games for the club that he is best remembered not even for a single standout match, but for thirteen-and-a-half seconds of action within it.

That is all it took Phil Manassa to charge from half-back to half-forward and slot one of the most famous finals goals of all time during the dying stages of the 1997 Grand Final replay.

That long run and goal transformed Manassa’s career. Had it not happened, he would most likely have been remembered as a gutsy, determined, aggressive utility player. Instead his solo performance in that Grand Final has become a celebrated part of footy folklore, and a staple entry when discussions are held around the greatest goals of all time.

It all began when Wayne Gordon tapped the ball across to the running Manassa on the half-back flank about 20 minutes in to the last quarter. He tucked the ball under one arm and charged up field like a rampaging bull, leaving sprawling would-be North Melbourne tacklers in his wake. He bounced the ball once, twice, three times, faked a handball to elude another Kangaroo opponent, bounced once more then slotted home an angled drop punt from 45 metres that split the middle. It was one of the greatest individual goals ever seen, and it so exhausted Manassa that he could barely make it back to his position in defence.

“By golly, what an individual effort,” enthused Channel 7’s Peter Ewin during his call of the dramatic moment. “That’s got to be the goal of the century!”

That goal put the Magpies within 19 points of North with more than 10 minutes still to play. But it was telling that, for all its inspirational qualities, the goal couldn’t lift the Pies. His teammates barely celebrated with him: it turned out that the game was already gone.

At the time, the man himself was more concerned with trying to regain his breath.

“I was just buggered,” he said later. “All I could think was that we had a chance to win and that I had to get back on (Malcolm) Blighty. After the game everyone was walking past and patting me on the back, saying it was fantastic, but I couldn’t comprehend it – I just didn’t think it was anything special. It’s like taking a big ‘specky’ mark – you never know how good it is until you see it yourself.”

Remarkably, it took another six months for Manassa to see the goal for himself, via video tape. And when he did he was pretty impressed. “It’s terrific to be remembered for something, particularly something that nobody has ever done,” he said.

An unfortunate side-effect of all the publicity surrounding Manassa’s late goal is that it has tended to obscure how well he played for the rest of the game. He had 21 touches and kicked three goals, a wonderful performance from a defender. Most outlets named him the Magpies’ second best player behind five-goal full-forward Peter Moore.

And all this when he was still just 21 years old, and already playing his 87th game, statistics which show just what an outstanding youngster he had been (he had debuted at 17). But he played his last VFL game when he was only 23, which still feels like a waste.

While Phil Manassa’s overall contribution at senior level ended up being a solid one, it was the 1977 Grand Final replay – or more correctly, that goal – which made him famous.

When Collingwood left Victoria Park in 1999, Manassa’s run was one of the highlights recreated one final time. Just a couple of years ago, Rohan Connolly in The Age ranked it the fifth greatest Grand Final moment of all time. It even featured in a Carlton Draught ad during the AFL’s centenary year of 1996.

But perhaps the most lasting tribute comes in the fact that the winner of the AFL’s Goal of the Year is awarded the Phil Manassa Medal. There could be no better recognition for one of the game’s greatest ever individual efforts.