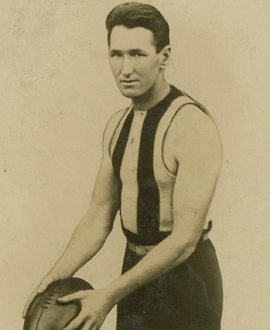 The main focus of our One Hit Wonder series has been on those players whose star shone brightly but briefly – and for whom one game, one magnificent performance, came to define their careers.

But games that define careers aren’t always positive. And two Magpies, more than a decade apart, found themselves remembered less for their otherwise fine footballing CVs and more for the rumours surrounding their final performances with Collingwood – performances that led to rampant speculation that both had taken bribes to play ‘dead’ in a Grand Final.

The first was Tom Baxter, a brilliant but controversial rover who hailed from Maldon and became a famous figure around Bendigo football.

In 1905 he helped drag two of his brothers and another man to safety from fumes in the Mount Tarrangower mine. Three years later he was making local headlines for different reasons, after furious Long Gully supporters accused him of playing ‘dead’ in that team’s Grand Final loss to Eaglehawk.

Following some damning testimony from his teammates, Baxter was subsequently suspended for life – a suspension that was later reversed on appeal. 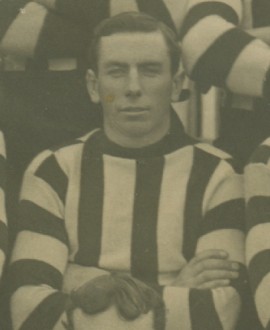 By this time he’d already become a Collingwood player, having made his debut in 1907 and quickly establishing a reputation as a skilful, quick, feisty rover (in those days players in the Bendigo league would often play with VFL clubs at weekends and with their local clubs mid-week). By the time 1911 rolled around, he was an established and important player at Victoria Park.

In that year’s Grand Final against Essendon, Baxter had a shocker of a last quarter. With the game tense and close, he twice kicked into the man on the mark. He then missed several easy shots on goal. He did manage to steer one through, but it wasn’t enough and the Pies went down by a goal. The sub-headline for the match report in the Argus on Monday was, ‘Baxter’s Mistakes’.

In the wake of the narrow defeat, Baxter was accused of having played dead in the game. He was so incensed by the rumours that he asked the Collingwood committee to investigate. They did, and cleared him, but the rumours persisted. They grew even louder when he was cleared to St Kilda the next year, though Baxter always maintained that was his decision after learning of an alleged secret meeting of players to decide if they wanted to play with him. The end result was a widely-held and oft-repeated view that Tom Baxter had taken a bribe in the 1911 Grand Final. It was something he never lived down.

Fifteen years later, a similar situation repeated itself – this time with the Collingwood captain.

The 1926 Grand Final had not been pleasant viewing for Magpie fans. They had confidently expected a Collingwood win, only to be thumped by Melbourne. Skipper Charlie Tyson was one of many who had a stinker that day, and there were a few rumblings of disaffection afterwards.

But those rumblings became a roar when Tyson was dumped both as a player and captain on the eve of the 1927 season. The rumour mill went into overdrive, especially after Tyson was reported to have been seen driving around in a new car. Surely the Collingwood committee would only have taken such extreme action in the most extreme circumstances?

As with Baxter, the story that Tyson had played dead in the 1926 decider quickly took hold. So much so, in fact, that Tyson felt compelled to write to newspapers during the 1927 season, defending himself and demanding that the rumours end. They never did.

Despite more than 100 high quality games as a follower/defender, and a further 38 with North Melbourne, his career was always blighted by the question mark surrounding his performance on the big day in 1926.

Many years later, Richard Stremski, in Kill For Collingwood, was the first to seriously look beyond the urban legend, and he concluded in Tyson’s favour. But it was much too late by then to do Charlie Tyson any good.

About the only good thing that came out of the whole episode was the appointment of Syd Coventry to take over from Tyson just days before the 1927 season. Four Premierships in four years followed, and the legend of the Machine was born with it.

But for both Tom Baxter and Charlie Tyson, there would be only bitterness and disappointment. Both were fine players, but both were remembered for sub-standard one-off performances on footy’s biggest day.