One of our most famous relics 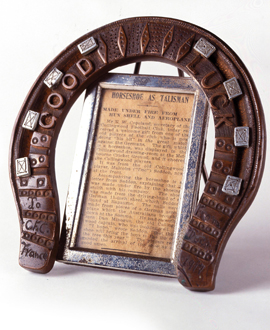 The 2017 season was not only Collingwood’s 125th anniversary, but also the 100th anniversary of one of the most important artefacts in the club’s extensive memorabilia collection – the ‘good luck’ horseshoe sent to the club by Malcolm ‘Doc’ Seddon from France during the First World War.

That horseshoe was made under fire by a shoeing smith in Doc’s company, who took a German howitzer shell and parts of a downed German aeroplane and turned them into a good luck talisman.

The shoe itself was made from the driving band of a German shell that Seddon had found at Bapaume, with the nails being made from a German plane the Australians had brought down at the Somme.

Seddon had two made, sending one to his former teammates and a second to his mother. The Collingwood version arrived at Victoria Park late in September, just before the Grand Final against Fitzroy, and it was nailed to the dressing room wall on Grand Final day. It carried the inscription, ‘Good Luck. To C.F.C, from Doc. France 1917.’

“I hope,” wrote Seddon in an accompanying letter, “that this shoe will bring the boys to the top of the tree this year.” The Pies duly saluted against the Roys and came away with the 1917 Premiership. Seddon himself returned to footy after the War ended and was a part of Collingwood’s 1919 triumph.

Doc Seddon (left) in uniform with an unidentified comrade

Seddon’s horseshoe was Initially famous simply for the story behind it, and the fact that it was a lucky omen in the ultimately successful pursuit of the 1917 Premiership.

But in recent times it has come to carry far greater significance.

President Eddie McGuire takes the horseshoe into the rooms before each Anzac Day game and hands it around to the players, asking them to recognise the values of mateship, support and togetherness – ‘side by side’ – that it represents.

As such, it has become one of the most meaningful and highly treasured relics in the club’s collection.