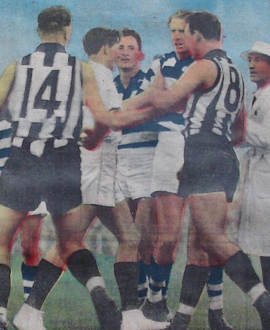 WHO is Collingwood’s greatest finals rival?

Plenty would instantly nominate Carlton and more than a few would settle on Melbourne given the fierce battles that took place in the 1950s.

But in terms of sheer weight of numbers, Geelong is right in the conversation, given what has happened in the past and what is still happening today.

But the old finals rivalry with Geelong – one which gained traction before and after the Depression years and reached great heights in the early 1950s – has been reborn over the past dozen years, and promises to active for a number of years to come.

In 2019 Collingwood and Geelong met in a final for the 24th occasion, which stands as the most finals meetings of any two clubs in VFL-AFL history.

Previously, it had shared the record with Carlton v Richmond on 23, with the Collingwood v Carlton and Collingwood v Melbourne clashes being on 22.

The two teams met in a section final in 1897 – the year of the VFL’s birth – and they are still going at it almost 125 years later.

Here is a snapshot of the Pies-Cats’ finals showdowns.

Geelong was bemoaning the fact it wasn’t allowed to play a home final – at Corio Oval – way back in 1897. Sound familiar?

The inaugural season of the VFL didn’t have a Grand Final, and was based on the teams’ performances in a series of sectional finals.

The ‘Pivotonians’, as Geelong was known, met the Magpies at East Melbourne, with The Agecalling the rough-house affair “a positive disgrace to the game.”

“Such misconduct is contemptible and surely men ought to be ashamed of showing such poor ideas of sport as to disgrace a manly pastime by descending to the level of brawler,” the paper detailed.

Geelong finished the regular season on top and Collingwood in fourth place, but Essendon would go on to win the premiership.

In that sectional clash, Geelong kicked 5.2 and kept their opponents scoreless in the opening term, before Collingwood “succeeded in pulling a sensational match out of the fire” with a fightback. The Magpies just narrowly failed to run down their opponents, and went down by four points.

Collingwood’s best player that day was the controversial Dick Condon, who Jock McHale would later called the greatest player he had seen in black and white.

The Magpies had to wait until 1901 to exact finals revenge. At the same venue, they kept Geelong goal-less in the first term and led from start to finish.

The difference that day was 21 points.

Magpie star Fred Leach played “the game of the match … his play was always grand, always clever and always fair”, according to the Argus.

Leach was only 23, and rated by many as one of the best footballers in the competition. Even opposition fans admired his athleticism and skill, with one saying around that time: “If we had Fred Leach, we’d lick creation … he’s the wonder of his age.”

Yet illness and injury plagued him after 1901. He only played 17 more games.

He would be dead from typhoid fever – at age 30 – in 1908, five years after his last game with Collingwood.

The Ageregaled: “Never before in the history of the Victorian Football League has a grand final match created such intense and extraordinary public interest as that played between the powerful Geelong and Collingwood combinations.”

The Cats led by 25 points at three quarter time. The Pies clawed that back to eight points late in the game before Geelong held on.

There was little ill-feeling, though. Jock McHale, captain Charlie Tyson, president Harry Curtis and secretary George Connor offered their “unstinted congratulations and acknowledge Geelong’s superiority” in the rooms after the game.

Things had changed the next time these two sides met in a final – the 1927 semi-final.

McHale’s ‘Machine’ was cranking into gear and their 66-point win over the Cats helped them on their way to the first of their four successive flags a few weeks later.

The Cats won easily, but the Argusfinals system allowed the Magpies one last chance to redeem themselves.

What made it even more difficult leading into that year’s Grand Final was that their legendary coach McHale was seriously ill at home and was forced to listen to the game on his wireless. It made for bad listening as the Cats led by 21 points at half-time.

However, an inspired speech from long-time administrator Bob Rush inspired the team to rally.

Collingwood stormed over the top of Geelong, as they created history by being the first – and the only – side to win four premierships in a row.

One leading scribe called it “one of the finest performances in football” while skipper Syd Coventry said: “We were up against the greatest odds a team could face at half time and I think the boys wanted to rise to the occasion.”

Then came the Grand Final acknowledged as one of the greatest of all-time. It happened in 1937, and the Magpies kicked six goals to three in the opening quarter and looked to have the upper hand.

But Reg Hickey’s Cats turned the game around. They ended up going on to win by 32 points, in a match that Brownlow Medallist Ivor Warne-Smith described as “perhaps the greatest Grand Final in the history of the league.”

The Collingwood annual report was even more definitive, saying it “unquestionably takes its place in the history of football as one of the greatest exhibitions of the game ever seen.”

The early 1950s has long been regarded as the halcyon years of the Collingwood-Geelong rivalry.

The Cats from early in that decade have long been considered as one of the greatest teams of all-time.

They won consecutive flags in 1951-52, played off in another Grand Final in 1953, and put together the greatest streak of wins in league history – 23 in succession.

At the time, Collingwood was trying to stand up to the might of the Geelong, a team that had been its nemesis through the 1951 and 1952 finals series.

That day turned the football world on its axis and sowed the seed of belief in the minds of the Magpies.

They carried that confidence into the 1953 finals series – beating Geelong in the second semi-final by 30 points and the Grand Final by 12 points to win the flag.

It was the club’s first flag in 17 years and the Magpies’ 12th overall.

Collingwood had led at every stage of the game, by two points at quarter-time, nine points at half-time and 29 points at the last change.

The Cats outscored the Magpies in the final term, but couldn’t catch them. A late goal to Bob Rose proved the difference, as he said: “I had the horrible thought of what might happen if I had missed … as it went through, somebody in black and white waved at me, and I returned the thumbs up.”

There were two more finals in the mid to late 1960s, with different faces.

Collingwood knocked off Geelong by four points in the 1964 preliminary final, to advance to the Grand Final, which they would lose to Melbourne.

Then three years later, it was the Cats’ turn, thrashing the Pies by 30 points in the 1967 semi-final.

There were two close, memorable preliminary final wins to Collingwood over Geelong in 1980 and 1981 – who could forget Peter Daicos’ classic mark over Malcolm Reed (1980) and his audacious goal around Ian Nankervis (1981), to name a few highlights.

Between those years and 2007, there was little else.

But it was worth the wait for a new generation of fans.

We’ve had four finals since then – one of them a Grand Final and three of them being preliminary finals.

The 2007, 2009 and 2011 Cats – by sheer weight of numbers and three flags across five seasons – all but displaced the ’51-’52 premierships sides as their club’s greatest-ever side in terms of achievements and capabilities.

In that time, Collingwood has been a worthy adversary.

The 2007 preliminary final still looms large in the minds of Collingwood and Geelong supporters.

In what would prove to be Nathan Buckley’s 260th and final game in black and white, the Magpies took the game right up to the overwhelming premiership favourites before going down by a heart-breaking five points.

The game drew 98,002 – almost 9,000 more than the 1953 Grand Final and exactly 700 more than the 2007 Grand Final a week later – and the fans cheered as Travis Cloke and Paul Medhurst kicked three goals each, Sean Rusling kicked two, but the Cats held on in the dying seconds.

If the Magpies had won, Buckley wouldn’t have played in the Grand Final as he had re-injured the hamstring that had caused him problems late in his career.

Geelong was too good in the 2009 preliminary final when it won by a whopping 73 points on their way to another flag.

Before more than 95,000 fans, the Magpies were never seriously threatened in that year’s preliminary final against a team considered past its peak.

How wrong the critics would be!

Still, a seven-goal to one opening term set up an early lead which Collingwood built upon. At half-time it had stretched to beyond ten goals before Geelong pegged it back to 41 points at the end.

Collingwood had 12 goalkickers – Cloke kicked three – on the night.

That was meant to be Gary Ablett’s last game as a Cat. But he’s back again now, and ready to take on the Pies in the 2019 qualifying final.

Collingwood and Geelong met again in the 2011 Grand Final – the first time the two teams had met in a premiership playoff in 58 years.

The Magpies led by 18 points when Ben Johnson kicked a goal at the eight-mark of the second term.

But by half-time the Cats cut the difference back to three points and looked very dangerous.

Geelong took control in the second half, kicking five goals in each of the last two quarters to run out 38-point winners before 99,537 fans.

The next chapter is eagerly awaited.