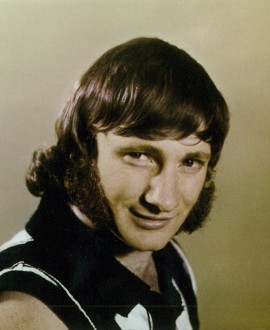 ALAN Atkinson represented Collingwood at senior level on 134 occasions, but the high-flying, speedy wingman will always be best remembered for one moment in one game.

In a way, that’s a little unfair, given what he was able to produce in his Magpie body of work, but that’s the nature of football.

Atkinson’s magic moment came in Round 21, 1973, a game etched in footy folklore when Hawthorn full-forward Peter Hudson flew into VFL Park – as it was called then – on a helicopter and made his comeback to league football following a serious knee injury suffered in Round 1 of the previous year.

While the champion Hawk forward’s chopper flight became famous, Magpie fans preferred to remember the aerial display of 21-year-old Atkinson, who seemingly launched himself into the stratosphere that August afternoon, and dragged down one of the best Collingwood marks of the era.

Atkinson rose over the top of Leon Rice and dragged down a towering mark, with his feet planted into the Hawk player’s back before landing spectacularly. The following day, it was anointedWorld of Sport’sMark of the Day, and at season’s end, it was selected as the VFL ‘Mark of the Year’.

Atkinson had always been considered a talented player from the moment he came to Victoria Park from Hamilton, straight out of the club’s recruiting zone. Standing at 182cm, he was a wingman and half-forward when he got his chance to play his first senior game in 1970.

It came at a time when the Magpies were the glamour team of the competition, heading towards the top of the table, and breaking into the side was tough. He was 18 when selected for the Magpies’ Round 14 clash with Hawthorn, at Glenferrie Oval, and he didn’t let his coach Bob Rose down. He had 18 disposals and kicked a behind in a losing team.

He played five games in a row but was overlooked for the club’s finals campaign. Still, he’d had a taste, and bigger things lay ahead.

Atkinson played 18 games the following year, but it was 1972 when he began to make a more consistent mark on the game. He started the year playing a few games at full-back, given some injury issues at the club, but fitted neatly back on the wing when it mattered. He reeled off 23 games for the season, having what would amount to a career-best 322 disposals.

The Football Recordcalled him “another of the big improvers at Collingwood this year”, lauding his “tremendous pace”. He was “a delightful pass on the run at top speed” and had an uncanny knack for sneaking the occasional goal in a season in which he added plenty to the Magpies’ centreline.

He also possessed some of the best sideburns in football in the early 1970s.

At his best, Atkinson was almost unstoppable. He was tall for a wingman, and his wiry build helped him to cover the ground quickly. He was – as Leon Rice would attest – a terrific and spectacular mark, but also good at ground level. He was a good user of the ball too, and helped set up many scoring opportunities for his forwards. And he was a fine kick for goal himself. One of the club yearbooks in the 1970s noted this, saying: “Sprinting down the flanks, it is great to see Alan running with the ball, steady and then bang – straight through the centre for full points! Beautiful to watch.”

He worked perfectly in tandem with fellow tall wingman Robert Dean, with the Age once saying: “It didn’t matter which side of the ground the Magpies decided to attack through – Alan Atkinson had one wing sewn up and Rob Dean had the other.” In some ways, as a wingman, he was ahead of his time, with one description being that he “soars for amazing marks and plays on at all times.”

The major issue Atkinson faced was one of consistency. He had the game to be regarded as elite, but wasn’t always able to produce as regularly as he would have liked, or to the levels fans came to expect after some of his more thrilling individual exploits. He also had a fairly laconic game style (some likened it to Twiggy Dunne’s) which meant he could sometimes appear as if he was being too casual in his approach.

He ended up playing 134 games but missed out on grand final appearances in both 1970 and ’77. His last game for Collingwood came in Round 22, 1978, when he kicked three goals in a game against Melbourne.

He was recruited to Footscray and played six matches in 1980 – all of them losses – with his last one fittingly coming against his old side. Atkinson had 13 possessions that day against the Magpies, and was pictured fighting for possession of the ball with his opponent Ricky Barham on the back page of the Age.

It wasn’t quite the way it was meant to end for Alan Atkinson. But Magpie fans still recall the day he reached for the sky at Waverley to pull down one of the greatest marks in Collingwood history.