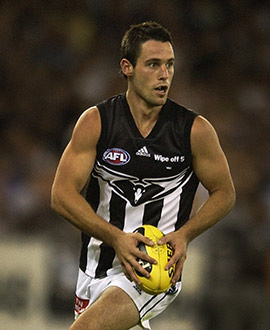 Footballers who own the clutch moments – those who almost crave it – are so often the ones that form the strongest connections with the fans.

Alan Didak was a perfect case in point.

A football showman, the man the fans dubbed ‘Dids’ always seemed to be able to back up his bravado with the sort of brilliance at precisely the right time that set him apart from so many of his contemporaries. He was sublimely skilled, with a raking left foot, deadly in its accuracy and dynamic in its impact.

At times he was compared to the incomparable Peter Daicos, which only served to show just how good the ‘Macedonian Marvel’ actually was. For Didak, the kid with Croatian heritage was some player.

The fact that there were similarities between the two Magpies of different generations was good enough, even if few could have ever hoped to reach the lofty status that Daicos has in the Collingwood pantheon.

Off the field, Didak’s sense of confidence, some might say cockiness, sometimes landed him in trouble. But through it all, his breathtaking moments in black and white always seemed to overshadow the negatives. As The Age’s Greg Baum so perfectly put it: “What Alan Didak had, he flaunted. A shimmy here, a waggle of his forefinger there, a cocky, mouthguardy grin; Didak didn’t just kick goals, he made a production of them.”

And those productions made him one of the most popular players of his generation, and the passion for you from the fans stretched from the start to the finish of his 218-game career.

That swagger was there almost from the start.

Didak was brought up in Whyalla, on South Australia’s Eyre Peninsula, and he cut his teeth with Port Adelaide in the SANFL, making his senior debut at 17. In that same season he captained an under-18s Australian side in a compromise rules series against Ireland. Collingwood liked what it saw in the talented forward/midfielder and had no hesitation taking him with pick 3 in the 2000 national draft.

Fittingly, Didak scored a goal with his first kick in AFL football, in the Round 7 match against North Melbourne in 2001. That was the first of 274 goals kicked in black and white, and so many of them are on automatic recall for Collingwood fans lucky enough to have witnessed some of his finest moments. 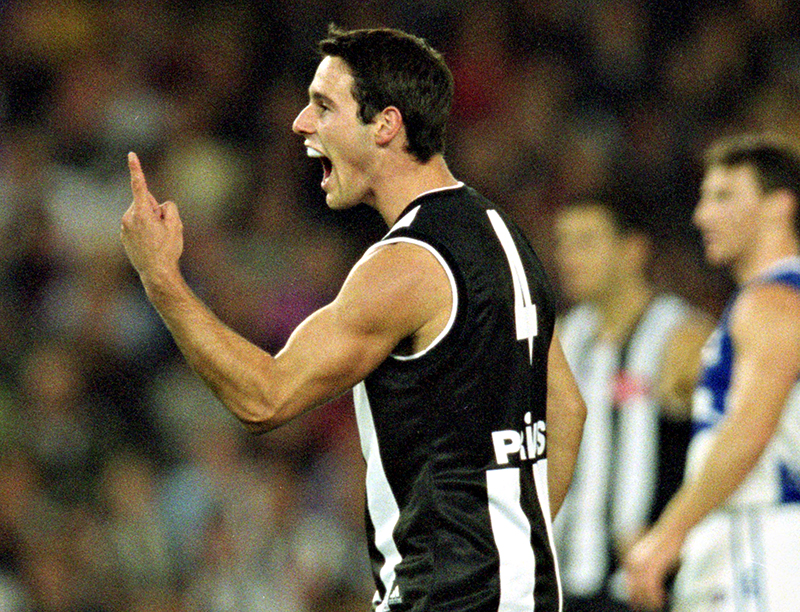 A young Didak celebrates kicking a goal with his first kick in AFL football.

Where do you start?

There was the sealer he kicked in the 2003 qualifying final against the Brisbane Lions, when he was on the wrong side for a left-footer, tucked up against the boundary line 50m out. With the crowd roaring, and a goal required to sink the Lions, his captain, Nathan Buckley, ran over to ask him: ‘Are you going to kick it, or are you going to pass it off.”

Didak’s answer was simple. “I’m going to kick it”, he said. And he did.

There was the scissor-kick goal he managed against Geelong in the 2007 preliminary final that almost defied logic, and another failed attempt against Melbourne that proved that audacity doesn’t always pay. There was the clutch goal he kicked in the dying seconds of the game against Port Adelaide at AAMI Stadium in 2006, to win the match.

Collectively, there were the highlights of the 2010 season, in which Didak won the club goalkicking award with 41 majors, producing some of the most special moments in that remarkable season for the club.

Three goals came in the space of one minute (yes, one minute) against West Coast in Round 14. The first was a beautifully measured snap that he bounced through from the boundary line. Thirty seconds later, he soccered the ball off the ground from 25 metres, and from the restart of play, he took the ball from Jarryd Blair and slotted it through a third from 40 metres. Fans, and even Didak himself, barely had time to draw a breath. 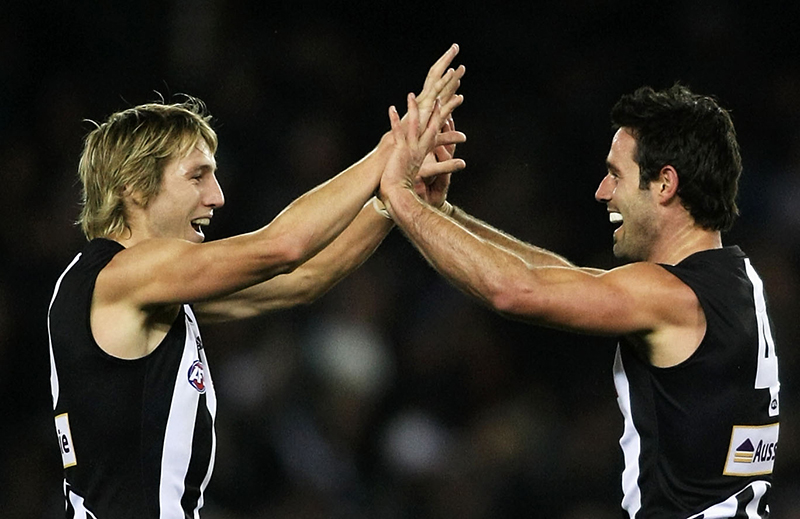 Didak celebrates a remarkable game against West Coast in round 14, 2010.

Three weeks later came what would be his trademark shimmy. He goaled against Richmond after using his footwork and evasive skills to baulk two hapless Tigers before closing the deal, as he so often did. That moment prompted the great Malcolm Blight to say that Didak had been “born with a footy in his mind.”

Then, in the Grand Final Replay against St Kilda, he produced the second most famous smother of that game, when he stopped Jason Blake in his tracks during the third quarter, and turned around a right-foot snap that effectively snuffed out the Saints’ hopes. It was vintage Didak, and all the more memorable because he was doing it under sufferance. He had badly damaged his pectoral muscle late in the season, but kept playing.

Collingwood supporters loved him from the outset. By the time he had turned 21, he was a bona fide Collingwood cult hero, having a supporters’ group create a website in his honour, as well as strike the ‘Alan Didak Medal’, for their own best-and-fairest award.

It wasn’t just his goalkicking nous that attracted support; for a time a rat’s tail haircut did the trick. But he was also a complete footballer who didn’t just rely on a highlights reel for his popularity. This was never better underlined than when he won the Copeland in 2006 – proving his footy credentials once and for all. He was brilliant that year and was always a menace in the forward 50. Even when his team tapered off he was still a potent force and it was no surprise when he won the best and fairest as well as being named as an All-Australian. At the end of the season it was found that he had badly damaged a knee which required major surgery, making his performances even more impressive.

Along the way, Didak had a few moments where he tested the club ‘s patience, as well as that of the fans.

In 2007 he became embroiled in controversy regarding the company that kept away from football, and then a year later he and Heath Shaw were suspended by the club for the remainder of the 2008 season after Shaw crashed his car and lied to protect Didak, by saying he wasn’t a passenger. Both worked hard to regain the respect of their teammates and their club.

Statistically, Didak’s best season was in the 2010 premiership year. He had a career-best 590 disposals and kicked 41.21 – just two behinds fewer than his 2006 tally – and won a second All-Australian jumper that season. He played 20 games in 2011, but unfortunately his body was starting to fail him. His return in 2012 and 2013 – his last two years in black and white – meant he only played 16 games across those two seasons.

When he returned to the senior team against West Coast in Round 22, 2013 – almost as much by persuasive powers of his teammates as anything else – he kicked his penultimate goal in black and white. And when he did, the entire Collingwood team left their stations, and rushed to him. It was a measure of what he meant to them. If the fans could have done the same, they would have.

His 218th and last game came in the elimination final loss to Port Adelaide. And when he was delisted a few weeks later, it wasn’t the farewell that anyone wanted. He briefly flirted with the idea of trying to reprise his magic for another season at Greater Western Sydney, but the deal fell though.

Collingwood fans were happy about that. For just as Daicos remained a one-club player after the club called an end to his career almost two decades earlier, Alan Didak’s association with Collingwood and the Magpie Army was so strong that it would have been a sin had he played anywhere else. Luckily, we – and he – were spared that imperfect end to a glorious career.