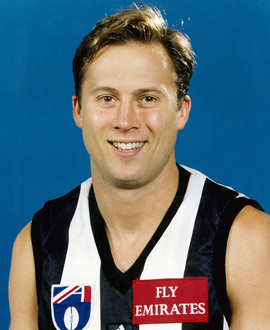 From ‘country bumpkin’ to 100 game player, Alex McDonald’s life began to change quickly when he was the AFL’s number one draft pick in 1988.

The spotlight shone on the 19-year-old, 69kg boy from Waubra, a town of around 500 near Ballarat as he was drafted to Hawthorn.

“I’ve watched him play a few times and I believe that he suits our policy.”

McDonald walked into his dream job, although he barely saw playing the sport he loved as a profession.

“I didn’t really understand in 1988 that it was a career. For me it was doing something I loved,” McDonald told AFL Media in 2012.

“Back in those days there wasn’t as much press so the build-up wasn’t as big. There might have been a small amount of press in and around football circles but to the wider community, it was a complete shock to everyone.

“There was no expectation to walk straight in and play.”

Opportunities failed to present themselves in a Hawthorn team brimming with the star power of John Platten, Gary Buckenara, Robert DiPierdomenico and Chris Langford.

After 46 games spanning over six seasons, McDonald decided the time was right to pursue his dreams elsewhere.

“I realised I had to reinvent myself a little bit. I thought to myself ‘with Hawthorn and the way they’re going, with a change of coach and a new structure, it was probably a good time for me to move to another club and have a fresh start” he told AFL Media in 2014.

That fresh start came at Collingwood where new coach Tony Shaw immediately liked what he saw.

McDonald played all 22 games in his first season at the Magpies and averaged a career-high 14 disposals per game.

He remained a regular in the side in the next two year, predominantly filling a crucial role as a tagger, but one who had the ability to take a high-flying mark.

It was arguably McDonald’s best season. He once again posted a career-high disposal average, and enjoyed the best game of his career with a 36-possession game against Richmond in round four. The match saw him enter a purple patch where he polled Brownlow vote’s three games in a row.

By this stage of his career, the McDonald name was beyond the Ballarat region and through the AFL.

Younger brothers Anthony and James had been drafted to Melbourne and were on their way towards building established careers.

However Alex’s was coming to an end at Collingwood.

Hip problems kept him sidelined in 1999 and ultimately forced his retirement at the age of 29.

However the love of football that ignited McDonald’s career as a schoolboy in Ballarat ensured he was not lost to football at the end of his 107 game career.

He is now a successful player agent and the head of McDonald Sports and Talent Management.

Despite a company portfolio of around 80 current AFL players, there would be no doubt McDonald would keep a particular interest in the ones wearing black and white – Clinton Young, Ben Sinclair and Matthew Scharenberg.

Hawthorn may have picked him first, but it is in a Collingwood jumper where the memory of Alex McDonald playing days lives on.