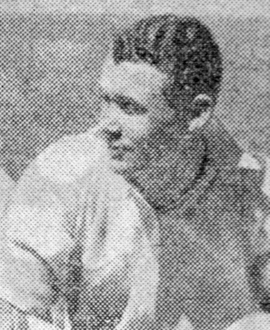 Played six games for the Pies across 1933-34, but made a bigger name for himself with the Collingwood Cricket Club, where he made mountains of runs, served as captain and later became a Life Member. He also managed one game for Victoria, opening the batting against Tasmania at the MCG in 1937/38, where he made 21 and 16.

His football career was less noteworthy. He had debuted with the cricket club in 1929-30, but took longer to get going in football. He spent most of 1932 with the Collingwood Districts side (our reserves) and did so well that he was named in the centre in a VFL reserves representative team. He carried that form over into the 1933 pre-season, where he starred in some of the practice matches. After one of those games, the Sporting Globe noted:

“The display given by Andrew-Street on Saturday brought him strongly into the limelight. Taller than the usual wing player, Andrew-Street marks well, moves coolly and passes accurately, and after having gained experience with the second eighteen last year, is almost certain to make his debut in senior ranks this season.”

And so it proved. He made his senior debut  against Fitzroy in the second round of the 1933 season, after a tumultuous week which saw the Collingwood players accept a temporary pay cut to help ease the club’s financial problems. Named on a half-forward flank he kicked just a solitary behind that day (Fitzroy’s Jack Moriarty kicked 10), but kept his place for the next three matches without ever looking like securing his position. He played only one more game late in ’33 and another early in 1934 before his VFL career ended.

A clever forward who also enjoyed stints on the wing and occasionally at half-back, one of the highlights of his time at Collingwood was when he won an intra-club goalkicking competition at a club picnic in 1933! He was taller than most wingmen/flankers in his time, but was so lithe and agile that his extra height was actually a positive.

Born Alfred Gordon Andrew in Bondi, he added his step-father’s surname to his own when his mother remarried after Alf’s father died in the First World War. Alf himself served with the RAAF in the Second World War and later had a brief return to the spotlight when, in the 1950s, he was called as one of the witnesses in the libel trial of Frank Hardy over his book Power Without Glory. Andrew-Street was called to testify because of his friendship with John Wren Jnr (he was working as a salesman in a firm owned by Mr Wren at the time).