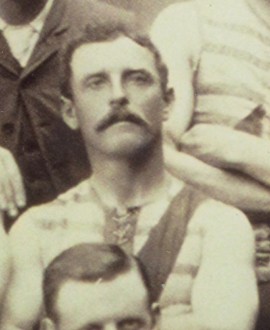 When Collingwood made its entry to the VFA in 1892, surprisingly few of the new club’s precursor, Britannia, made the journey with them.

Bill Proudfoot, of course, would go on to become the most famous alumnus from the Britannia club, but at the time the club played its first games, nobody yet knew how good or influential Bill would become. And only a handful of other ex-Brits would don the black and white.

But there was one player on the Magpies’ books that first year who was a bona fide Britannia legend. Unfortunately, by the time Collingwood came along, he was just that little bit too old to have any significant impact on the new club’s fortunes.

Alf had enjoyed at least an 11-year career with Britannia by the time the club folded and Collingwood emerged. The earliest references to him have been found in 1881, though it’s also possible he played earlier. He is known to have been Britannia’s third captain, and there are references to him holding that role in 1881, although that is more likely to have been in a fill-in capacity. There was talk of him playing elsewhere in 1882 but he made a late decision to stay with Britannia, and he then assumed the full-time captaincy in 1883 when Jack Joyce crossed to Carlton. He held the post from 1883-1887, and then again in 1890. He handed over the reins to Jack Duncan in 1891 but remained as a player.

But far more than just sticking around and being a great leader, ‘Doney’, as he was widely known, became one of the Brits’ most important and decorated players. He won a gold ring for ‘good back play’ in 1887, a marble clock for ‘good play’ in 1890 and a pipe for ‘good centre play’ in 1891. It is highly likely he won trophies in many of the other seasons too, but those were not reported regularly in newspapers of the day, especially for second-tier clubs like Britannia.

Either way, he loomed as an important potential player for Collingwood as the new club entered its first season. With his experience, skills and obvious leadership qualities, it came as no great surprise when he was elected captain for the club’s first practice match, against the Clifton football club on the Darling Gardens (although only after Archie Campbell had come to blows with Proudfoot over the issue!) He was also one of four players who served on the committee.

But it WAS a surprise when, just a few weeks later, he was overlooked not once but twice for the permanent role. Joe Delahunty was the man chosen to lead the Magpies, but when he fell ill before the season started, Tasmanian George Watt filled the role.

One theory is that Alf himself had succumbed to injury or illness, something which is backed up by the fact that he didn’t make his debut until the club’s seventh game, against South Melbourne. An alternative theory, however, is that his teammates and new club colleagues realised he was just too old – a theory supported by the fact that he only played four games for the year, before finishing his career with a handful of games for Collingwood Juniors in 1893 (where one journalist rather sarcastically, and harshly, pointed out the contradiction in such an experienced player representing a ‘junior’ outfit!).

Dean played mostly on the half-back flank in his senior games for Collingwood, although he did venture forward and kick a goal in his second last game. As a player he seems to have been a strongly built running type, capable of playing in the midfield and/or in defence. Photos of him from his Britannia days support that, as does his profession as a labourer and volunteer fireman. And he was a highly valued club member, as evidenced by the fact that, when he fell ill in 1921, the Magpies immediately donated the substantial sum of 20 guineas to a fund set up to assist him. He would die half a dozen years later.

There is no doubt that Alf Dean was a seriously good player. Along with Jack Joyce he was the best and most influential Britannia player of the 1880s. But Collingwood probably emerged three years too late for him. With different timelines he would surely have been seen longer at the top level.