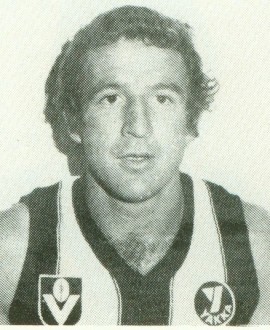 Even though he was a Collingwood supporter from birth, it’s fair to say that the only times Magpie fans got to see the best of Allan Davis was when he was wearing opposition colours.

Collingwood was the fourth – and last – of Davis’ VFL clubs, having previously played with St Kilda, Melbourne and Essendon. And it’s fair to say that, after a 15-year career, he was far from his best by the time he made his way to Victoria Park for the 1980 season.

By then everyone knew that Davis’ best was brilliant. He was a superbly talented forward with a touch of magic in his ball-handling who was a master of the unexpected and could kick freakish goals. Despite standing only around 180cm tall he was also an excellent mark for his size and blessed with a tremendous spring (which worked against him where he was sometimes played at full-forward, a position he didn’t like) and a strong and fiery competitor who would take it up to any opponent. Des Tuddenham once collected him and cost him a couple of teeth while at St Kilda: but Davo remembered and years later squared the ledger when Tuddy was at Essendon.

A few days short of his 18thbirthday, Davis had become the youngest member of St Kilda’s 1966 Premiership side. He must have had mixed feelings that day, as he had grown up a mad Magpies fan, with Bob Rose a particular favourite.

Footy genes obviously ran in his family. His grandfather Bill Pratt was a ruckman who played seconds for Fitzroy. His dad, also Allan, was born in Collingwood and went to Abbotsford State School. He was a good footballer who played with local Abbotsford sides before being seriously injured in the Second World War (the genes continued into Allan Jnr’s own son, Chad, who played 31 games for St Kilda in the early 2000s)

The family moved to the bayside suburb of Hampton when Allan was young, which meant he was residentially bound to St Kilda. He was a schoolboy sensation as a footballer, and some judges rated him the best young player they had seen. He became a brilliant player at the Saints, finishing runner-up in their best and fairest in 1972 and twice topping the club’s goalkicking, with 70 in 1971 and 48 in 1973. But he sparred regularly with coach Allan Jeans, the latter convinced that Davis’ larrikin personality was evidence that he didn’t take footy seriously enough and needed to be brought into line, and Davis in turn not responding well to heavy-handed authority.

But with Collingwood in the middle of a strange period of recruitment that focused on experienced players from other clubs, Allan was able to enjoy one last stint in the VFL when he crossed to Victoria Park in 1980. While it might have seemed like an emotional decision aimed at completing his footballing journey, it was actually driven more by a close connection with then Magpie coach Tom Hafey.

Unfortunately there was to be no fairytale return to his boyhood club. He played the first and third games of the season, then was brought back for the elimination final against North (where he again was played at full-forward). He was still a danger around goals, but much of his pace and trickery had been diminished, and he retired from VFL footy at the end of the year. He later played in Tasmania, and was an assistant coach at St Kilda, even filling in for four senior games when Darrel Baldock had a stroke.

Allan Davis’ last game at Collingwood was also his 250thin the VFL. By any standards he enjoyed a magnificent career. Talented, tough and with a touch of magic, he was just the kind of player the Magpies could have done with at the start of his career, rather than the end.