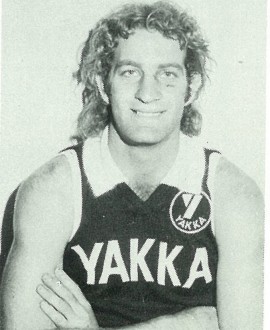 A tremendously talented centre half-forward from Robinvale, Edwards had his career ruined by crippling knee injuries.

He first injured his knee in 1978 when he tackled teammate Ian Scrimshaw at training and a year later was traded by Richmond in a move that left him bitter with the Tigers.

A superb mark, Edwards showed immense promise until cut down by injuries, finally culminating with an ankle reconstruction that ended his career in 1984. He said later that the knee problems meant he lost his leap and half a yard of pace.

Allan was the son of Footscray’s Arthur Edwards, and his own son, Jake, went on to play for Carlton.