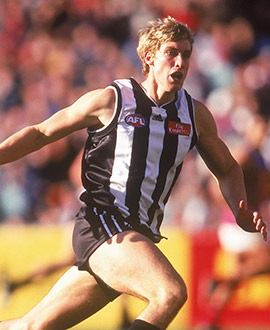 A solidly built key position player who could fill spots at either end of the ground, Andrew Hill showed great persistence to earn his crack at AFL football.

Originally from Tasmania, Hill played for the Tassie Mariners in the TAC Cup in 1998. But when he wasn’t taken in the 1998 AFL Draft he decided to spend the next season with the Burnie Dockers in the Tasmanian Football League. He played good footy that year, and was chosen to represent Tasmania against Western Australia in Kalgoorlie. In 2000 he moved to Melbourne and signed with the Northern Bullants, then operating as a stand-alone club in the VFL. And so good were his performances in his 18 games that season that Collingwood took him with pick 47 in that year’s rookie draft.

His start to the season was interrupted when he broke his arm after being knocked off his bike while riding to his part-time job just before the Ansett Cup. He then played some good footy with Williamstown (then affiliated with the Magpies in the VFL) in the rest of 2001, kicking 21 goals from 12 games, including a bag of five against Springvale. In Round 15 he was chosen for what turned out to be his only senior AFL game, against Brisbane at the MCG. Wearing the #44 guernsey he gathered seven possessions, but was dropped the following week and never made it back.

He played with Willy again in 2002 but a quad injury derailed much of his year and he was eventually released by the Magpies at the end of the season, returning to Tasmania to play with North Launceston. He then spent a further four seasons with Norwood in the SANFL, but the fact that he played only 24 games in that time underscores the impact that injuries continued to have on his output. Those injuries eventually forced his premature retirement from the game at age 27.