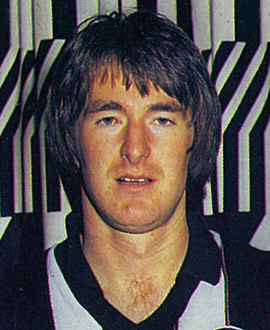 GIVEN Andrew Ireland’s decades of service to football administration in Queensland and New South Wales, it’s easy to forget how important he was to Collingwood as a footballer across a whirlwind six seasons.

Originally recruited as a key forward, he was one of the Magpies’ most reliable yet attacking defenders of his era, spanning 1975 to 1980, and one of our best performers in big games. Then, at only 27, he walked away from an on-field career that was at its peak, to help shape the destiny of two non-traditional football states, which often brought him into conflict with his former club.

Ireland’s life may well have taken a different pathway had his family remained in the city of his birth – London. He lived in England for the first four years of his life before his parents chose to move halfway across the world to Melbourne, Australia in 1957 – just a year after the city hosted the Olympic Games.

Ireland began his football journey with Preston Swimmers – where one of his football contemporaries, Fitzroy’s Garry Wilson, also played – before progressing to Ivanhoe Amateurs, which had long been a breeding ground for Collingwood footballers.

Something of a late developer, he built a solid record in the VAFA, establishing himself as one of the competition’s most productive forwards. Playing at centre half-forward, Ireland represented the VAFA in 1973 and ’74, and was an All-Australian in both seasons. Long after he retired, he would win selection in Ivanhoe’s Team of the Century.

Such was his form that he was approached by Collingwood to join the club in 1975. Off the back of some strong preseason form, the 22-year-old was chosen for his first VFL game, against South Melbourne in the opening round. Standing at 191cm, and weighing 81kg, Ireland was afforded plenty of game time in his first season, kicking 17 goals from his 21 games, winning the club’s best first-year player award.

Incredibly, he would only kick 12 more goals for the rest of his career, as a move to the backline in his second season became the making of him as a player.

Ireland made the move through his 11 games in 1976, and while his role at half-back took some adjusting to, it came to suit his attacking ways, unflappable demeanour, fine field kicking and strong marking ability. He became a perfect sidekick to centre half-back Bill Picken, and in some ways they looked – and played – a little alike: great judgement in the air, good hands and attacking flair from half-back.

He took his game to new levels under Tom Hafey in 1977, with the new outlook and revamped game style suiting him to a tee. The cool-headed, composed half-back played a key role in Collingwood’s successful rebirth in 1977, but just as he was enjoying the club’s change in fortunes, he suffered what appeared to be a season-ending injury when he broke his left arm.

But in the end he was able to defy the medics and return just before the end of the home-and-away season. There were more problems in Grand Final week though, when the new now key defender suffered a hamstring problem at training. He was brave in the drawn Grand Final, but would later lament one last term passage when waited for a loose ball from Bill Picken rather than make a dive for it, allowing Wayne Schimmelbusch to start a passage that ended in a behind.

“That contest was in my mind for ages,” he would tell the Herald Sun. “You think about all the little things you could’ve done that might’ve saved a score.”

Still, he potentially saved the game for the Pies late, when Stan Alves drove the ball forward to two unmanned teammates before a desperate Ireland emerged from nowhere to drag down the most important mark of his career, over Arnold Briedis. Without it, the Kangaroos might have scored. Instead, Ireland’s wobbly clearing kick ended up in the arms of Shane Bond, who tore down the wing, bouncing the ball frantically as the game ended in only the second draw in Grand Final history.

Ireland was named among Collingwood’s best players in both the drawn game and also the replay a week later.

He continued his good form into 1978 and was rewarded with a state game for Victoria against Tasmania. Ireland was among Collingwood’s better players in the five-point Grand Final loss to Carlton in 1979, while his final game in black and white came a year later, in 1980, when Richmond thrashed the Magpies by what was then a record 81 points.

He was working in an off-field role with the Magpies in the latter part of his playing career, but an offer to move to Queensland as the local league’s state director of coaching was too good to refuse, and he called quits on his Collingwood playing career after 110 games.

Moving to Queensland in 1981, he started a career in football administration that lasted longer than he could ever have imagined. He went on to become chief executive of the Brisbane Bears – and later the Brisbane Lions – and was there for their historic first AFL premiership in 2001. Later, he moved to the Sydney Swans as a football operations manager, playing a role in the club’s drought-breaking first flag in 72 years – in 2005 – before going on to become the club’s CEO for many years, including during their 2012 triumph.

Those successes in administration – as good as they were – didn’t quite make up for those near-misses in black and white. But Ireland’s remarkable contribution to the game, first as a player and then as an administrator (for almost four decades), will never be forgotten.