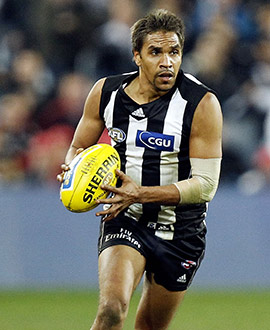 One of the most creative small forwards of the early 2000s, Krakouer could well have been the story of 2011 had the Magpies been able to secure their 16th premiership against Geelong.

The nifty small forward’s rise from a prison sentence to reborn AFL star was eye-catching, with his twinkle-toed style of play instantly installing him as a fan favourite.

His former Richmond coach Danny Frawley claimed Krakouer was the player most likely to win a Brownlow Medal “if football was played in a phonebox”, such was his ability to be clean in congestion.

The son of Jimmy, he was recruited to Tigerland from South Fremantle as a long-term prospect, but showed glimpses of the family magic in his first three appearances in 2001.

In 2002 he showed he was capable of brilliant pieces of football, but was unable to string it all together across a few games or even a match.

In 2004 he played every game and started to mature as a footballer, finishing sixth in the best and fairest. While he lacked consistency over the following couple of years he was constantly willing to apply pressure in the forward area.

His career looked over after he served time in jail in WA over an assault, but he returned to the WAFL, playing for Swan Districts. He had a superb season, winning the Sandover Medal (as the best and fairest player in the league), and the Simpson Medal, as best afield in the Grand Final.

Krakouer’s performance in the 2010 WAFL Grand Final has already gone down in football folklore, gathering 42 disposals and kicking four goals. He single-handedly won his side the game, kicking the match winner with minutes remaining.

His fairytale was completed when he was pre-listed by Gold Coast during October, and then traded to Collingwood (along with Murray Bushranger Jonathon Ceglar) in exchange for selection 25.

Krakouer a fine return to AFL  football, playing 23 of the 25 matches and kicking a career high 35 goals. His inclusion released Leon Davis to the backline where he was named in the All-Australian team.

Krakouer himself played in the side’s pre-season premiership and complied an impressive highlights reel as the year progressed.

He won Mark of the Year for his hanger over Adelaide’s Luke Thompson and teammate Dayne Beams in round nine and bagged four goals twice (in rounds 19 and 23) and laid 78 tackles.

He was one of the better performed Magpies on Grand Final day, kicking three goals in the first half and setting the side alight before Geelong reined him in.

Trouble struck in February 2012 when he tore his anterior cruciate ligament during a practice match against Geelong on a boiling hot day at Kardinia Park.

He had switched from No.7 to No.3 during the off-season but quickly arranged a move back to his old number.

Remarkably, Krakouer staged a late-season comeback, working his way through his rehabilitation with Brent Macaffer. The pair returned together in the VFL against Bendigo, and it took Krakouer only a matter of weeks before he slotted back into the senior side, kicking a goal from 11 disposals against Essendon in round 23.

He was worth his weight in gold a week later, kicking four goals in the Qualifying Final loss to Hawthorn, but went goalless in the fortnight that followed.

Krakouer endured a topsy-turvy 2013, first appearing in round six and playing eight of the next 10 games before being omitted after the shock loss to Gold Coast in round 17. Still, he had proven that his best was still up to scratch, kicking three goals to help sink Geelong and Carlton.

At the age of 30, Krakouer was delisted at the end of the season, but left with his head held high, thrilling the fans with 50 goals in 35 games.