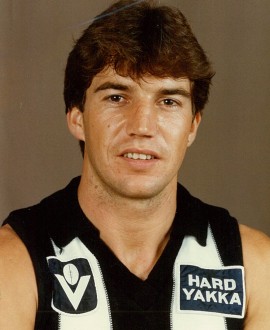 WHEN Keith Burns, Collingwood’s long-time developer of talent and under 19s coach, was asked to name the top ten players he groomed for senior football, it was no surprise to hear Gavin Brown and Peter Daicos rate so highly.

But one name, listed as Burns’ No.10 selection, was less recognisable to many Magpies supporters. That was Andrew Smith, a dashing half-back who only played 35 games, but for a time his ability to turn defence into attack and piercing left foot kick looked set to become black and white staples throughout the 1980s.

Sadly, his career was hampered by a sickening injury suffered during a preseason game in 1983, from which he lost confidence and never regained the form he had shown beforehand.

Smith, known as ‘Puddin’ to his teammates, had been recruited from Watsonia, in the Magpie heartland of the Diamond Valley Football League – the same club from which Murray Browne emerged.

He was only 17 when he started in the under 19s – under Burns – in 1978. By his second season he had won the thirds’ best and fairest award, which cleared him a pathway through to the reserves.

Smith was only two months shy of his 20th birthday when selected on the bench to make his VFL debut at Victoria Park in Round 11, 1980. He had played in the semi-final of the Escort Cup on the previous Tuesday, impressing Tom Hafey enough to win a slot when a few injuries hit, though the youngster wearing the No.50 didn’t trouble the stats men that day.

But it was a different story the following year, when Smith not only broke his way back into the senior team, but managed to hold down a spot throughout much of the season. It was an achievement, given the side was a premiership contender at the time.

Overlooked in the first two rounds, Smith’s form was good enough in the reserves to warrant selection for the Round 3 game against St Kilda at Moorabbin. It was the start of six consecutive games, as he impressed the coach and those in the crowd with his attack on the ball and his use of it.

One of his best performances came in his 16th game when his rebound off half-back produced two important goals in the big win over Hawthorn in Round 21, and the role he played that day earned him an audience with Lou Richards in the Sun News-Pictorialleading into the next game.

The Sun described Smith’s attributes as being important to Collingwood’s finals campaign: “He plays close and strong, shoulder to shoulder with the best opponents, but still has enough confidence to back himself when he has the break … Fast and long-striding, he is a one-grab ball handler, and a penetrating left foot kick.”

Smith played two finals that season. He gathered a respectable 14 disposals in the qualifying final loss to Geelong, but his luck ran out during the first semi-final against Fitzroy. The Magpies won the game by the smallest possible margin, thanks to a late goal to Ross Brewer, but lost skipper Peter Moore to a now-infamous hamstring injury and Smith to a less well-remembered dislocated shoulder. Smith’s season was over.

Injuries again played a role in restricting him to only 11 of a possible 22 games in Collingwood’s divisive 1982 season. But he was looking for a change of fortune in 1983, with the Sun saying during the preseason “Smith has worked hard … and is one of the fittest players at Victoria Park.”

Then came the moment that many, including Burns, believe changed his VFL career.  “Andrew was a great young player – tough as absolute nails, a good left-footer and he was playing along nicely,” Burns recalled.

But in a fiery charity practice match against Footscray at Waverley – played as a curtain-raiser to the Sun All-Stars v Carlton fundraiser for the Ash Wednesday bushfire victims – Smith had his jaw broken and lost several teeth in a controversial first-term incident involving Bulldog Steve Macpherson.

Five players were reported from the match, including Macpherson, but the Magpies were so furious with what had happened that they convened a special board meeting the following night to discuss what further action could be taken.

Smith was photographed in St Vincent’s Hospital, with newspapers saying he was unwilling to discuss the incident, which wasn’t surprising given the extensive surgery he had to undergo to repair his shattered jaw. He missed 13 weeks of football, returning later in the 1983 season for three games (one of them against Footscray), but he had minimal impact.

Burns remains certain the incident shook him: “Andrew lost confidence about his toughness and I don’t think he was ever the same player again.” Smith agreed, saying later: “The couple of years after my injury were lean years for me.”

Two more games, played only off the bench, came during the 1984 season, which was the same year that he launched legal proceedings against Macpherson for $100,000 damages. The Sundescribed the proceedings as “the first case involving a VFL player claiming damages against an opposition player.”

In the summons issued by 24-year-old Smith, it alleged “Macpherson assaulted him by striking him to the head with his fist.” The claim was for “personal injury damage” of $100,000 and “exemplary damages for a broken jaw (in two places), the loss of a lower wisdom tooth, maloclussion (swelling of the brain), concussion, facial swelling and numbness, internal facial laceration, shock, and pain and suffering.”

He claimed that while still employed by Collingwood, “as a result of his injuries, his employment versatility as a professional footballer may have been permanently impaired.” The claim was finally settled out of court in the late 1980s.

Unable to break back into a permanent role with Collingwood, Smith moved to Sydney in an effort to revive his fortunes at the start of the 1985 season. But after playing the first four games, he didn’t get another chance, and his VFL career was over.

He later joined Brunswick in the VFA, but it wasn’t the black and white finish many had forecast for him.

Andrew Smith had shown so much promise in his 30 games from his first three seasons with Collingwood, but sadly played only five following the broken jaw. His former coach Burns isn’t the only one who still believes that cost ‘Pud’ the chance of becoming a Magpie star.