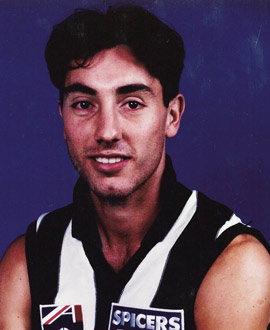 Andrew Tranquilli’s AFL career didn’t amount to a huge CV – 12 games and 20 goals – but he was able to achieve something few others have done: kick six goals in a single game of elite level football.

But just weeks before that big day, he’d been sent where all out-of-form forwards go – to the back line – to try to find some form.

It was late in the 1994 season, and the 22-year-old former Marcellin player was stuck in the reserves and seemingly anchored there without a guaranteed pathway back into the seniors. He’d played only two AFL games to that stage. He had plenty of talent, nice skills, good balance but  couldn’t put together a good enough block of form in the twos to demand senior selection.

He had originally been recruited as a defender but shaped more as a half-forward. Still, he was sent back to defence in the seconds, giving him the chance to get his confidence back by running straight at the ball.

The tactic worked and soon enough Tranquilli was pushing for selection in a Collingwood team that boasted many stars, but was fighting for its football life that season due to some injury issues.

No one, perhaps not even coach Leigh Matthews, expected what came next.

As the Magpies faced the ladder leaders West Coast for the Round 13 clash at the MCG, Matthews made six changes, including Tranquilli for his third AFL game. The coach asked the team to take some risks in the search for a greater reward.

It wouldn’t be easy. The Eagles had won the previous six matches. The Magpies had already lost five games that season and had only kicked four goals in their previous game. The Herald Sun had all but dismissed Collingwood as “undermanned, out-of-form and down on strike power.”

But Tranquilli took the game, and the Eagles, by surprise, kicking the first goal within two minutes. It was to be one of six incredible goals he would kick for the match, a stunning performance given how little AFL football he had played.

He only had 12 disposals for the game, but eight of those were scoring shots. He led well, kicked beautifully and read the game superbly. Collingwood stunned West Coast to win by 37 points, and the Magpies thought they’d found the perfect third tall forward in the classy, almost laconic, Tranquilli.

The performance entrenched him in the senior side for the remainder of the season. More goals followed, but nothing like the flood he had against the Eagles. He kicked three goals in each of the Round 15 and 16 games against Sydney and Fitzroy.

But injuries dogged him in the years that followed. He broke his leg in an intraclub match the next year and played only one game for the season, then found his 1996 season disrupted by a series of hamstring injuries. He was delisted at the end of 1996.

Tranquilli spent the following preseason trying out for Essendon and also played an intraclub game with Sydney at Gosford, and another with Hawthorn. But he was overlooked in the draft and ended up at Box Hill.

He kept playing, and kept kicking goals. In 2000, he kicked eight goals in a Central Highlands Grand Final victory with Springbank, and followed it up with seven goals in another flag-win a year later. It was a far cry from the MCG, but he loved the “little things” experienced in playing at that level. Back then, the best afield player would often walk away with five-kilogram bag of potatoes as his reward.

He would eventually return to Marcellin as a player before taking on a number of coaching roles at different clubs over the years, including a stint assisting with the Vic Metro academy squads.

For all the good work he has done for the game – at all levels – Tranquilli will always be remembered for that brief strut upon the AFL stage when he set the MCG alight on a cool June mid-afternoon in 1994.