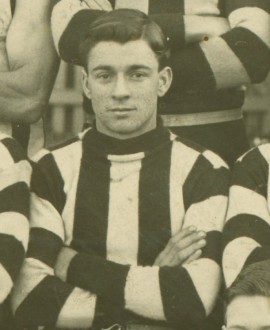 Art Wilkinson’s occupation before he enlisted in the First World War was as a chauffeur. So it seems appropriate that he would find his way into the Motor Transport Section during the course of the conflict.

He was 27 when he enlisted in February 1916 – by which stage his VFL days were gone.

He had a dual reason for wanting to England. Having been born in Melton, Mowbray, in England, Wilkinson still had a belief in and a reliance on the Mother Country. But as an adopted Australian, eager to protect what rights and liberties this country possessed, he also felt a similar sort of passion for the new country that he had come to love.

Joining up might also provide a ticket home to see his family.

He listed his father, Frederick Wilkinson as his next-of-kin, even if he lived in South Staffordshire. And he assumed that even if he would fight in France, he might get the chance to cross the Chanel one day to visit his relatives back home.

Wilkinson has spent some of his early years in Kilmore and came to play football there. He showed enough talent to be invited to train with Collingwood.

In the practice games of the 1912 season, he managed to win a spot on the club’s playing list, impressing first-year coach Jock McHale.

He was selected for the Round 2 game against Essendon, and although the Magpies would lose the match by 17 points, he would not only kick a goal but manage to keep his position within the team.

Punch reported: “Wilkinson, although somewhat light, is a game little player, who is to be seen always where the shots fall thickest. Improving each match, he makes up his deficiency in weight by his exceptional play and smartness.” It also described him as “a smart little player”, capable of taking opportunities when they presented themselves.

He kicked two goals against the Blues in Round 3, where one newspaper called him a “pocket marvel”. On two other occasions, he would manage to kick two goals in games.

It was McHale’s first season as playing coach, and things had been difficult for the Magpies throughout the season, with a long injury list cutting deep.

Wilkinson held his spot in side throughout the season, playing 11 games and kicking eight goals. The Magpies missed the finals, and that was the end of Wilkinson’s time at Victoria Park.

He saw greater opportunities at Essendon, even if they did not eventuate. He could only manage two games for the Same Old – against Geelong in Round 6 and against Melbourne in Round 9 – and that was end of his time at his second VFL club.

Wilkinson enlisted like so many of those British-born Australians intent on making a difference on the front line.

He left Australia on the Afric on June 5, 1916. He would return in mid-1919; not quite the same ‘pocket marvel’ that had left Australia 37 months earlier, but a man who had done his part when asked to.