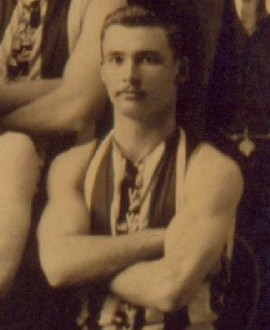 If you take a look at the photograph of Collingwood’s inaugural premiership side in 1896, you will notice a fit, muscular young man with a thin moustache on the far right of the second row.

His name was Arthur Gibbs, and he played a key role in three big moments for the young suburban club that was just starting to make its mark in the football world.

For a start, this product of the local junior side – but native of Newham, near Woodend – played his way into the senior side at an opportune time. He made his debut in Round 3, 1896, and finished the season as part of the side that won the VFA premiership in what was the first grand final played.

He started the grand final against South Melbourne in the back pocket, but was successfully moved forward with Jack Monohan in the final term. He was among Collingwood’s best players that day.

Nine months later, he was there for the first game of the newly formed Victorian Football League, as Collingwood took on St Kilda at Victoria Park – the first day of the new breakaway competition that would change the game forever. In all, he played a total of 35 games for the Magpies – 13 in 1896, 17 in 1897 and a further five in 1898.

And last, but not least, Gibbs would play a significant role in first linking the Leach brothers to Collingwood – Fred (1897), Arthur (1898) and Ted (1901) – which would prove a significant piece of recruiting.

Such was the regard he was held in at Collingwood that when he was married in 1899, the club presented this “former good and useful player” with a clock to mark the occasion. By then, time had run out on Gibbs’ on-field contribution to the Magpies, but he would not be forgotten by those who played with him.

That image of the young man involved in the club’s first flag hardly sits with the one that came years later when Gibbs took his patriotic fervour to extremes when he enlisted in the First World War in 1916 – 20 years on from his heroics in the 1896 grand final.

The wool merchant and former footballer was then 43, his hair had turned dark grey and he was married. While most men his age supported the cause of fighting for the Empire and for Australia, and helped encourage younger men to enlist, relatively few were prepared to put their bodies and lives on the life, as Gibbs was.

He joined the 14th Reinforcements of the 22nd Battalion and sailed from Australia aboard the Themistocles in July 1916, prepared to make sacrifices, just as he had on the football field two decades earlier. But understandably the rigours of war – not forgetting this war was like no other before it – presented Gibbs with a myriad of health issues that would make his service both uncomfortable and short.

On the same day his reinforcements joined with the 22nd Battalion, he was taken to hospital with sickness and sadly it became a recurring theme. His body failed him even though his spirit wanted to push on. Eventually, Gibbs was shipped from Calais, France, to England in February 1917 for treatment of haemorrhoids. By the middle of that year, he was sent back to Australia for home service with the report citing his age and incontinence as reasons for his return and his eventual discharge as medically unfit.

It wasn’t the sort of homecoming Gibbs deserved. He had been prepared to enlist in an endeavour to “do his bit”. Sadly, age and health issues impacted on his time in the forces. Gibbs was 67 when he died in August 1940, as yet another world war raged, but his contribution to Collingwood and his country should never be underestimated – or forgotten.