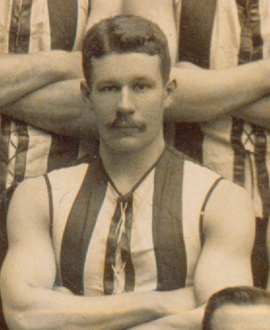 Arthur Leach was a footballing utility in every sense of the word. The brother of fellow Magpies Fred and Ted Leach played in a variety of positions throughout a distinguished career that netted him 173 games and 92 goals, was a key member of two premierships, captained the club, served on the committee and even spent more than 40 years as the club’s solicitor. Few Magpies in the club’s history can claim such breadth of service.

Born in Heidelberg, where his father managed the local Commercial Bank, Arthur Thomas Leach attended school at South Melbourne College and was a keen sportsman from an early age. A fine middle-order batsman, Leach represented Camberwell Cricket Club at age 17.

Football was Leach’s other great sporting love. He played with Surrey Hills and Nunawading from 1893-96, and in 1895 he even managed a couple of games for Essendon in the VFA, all while balancing his jurisprudence studies at Melbourne University (he was training to become a lawyer). He returned to Nunawading after his brief stint with the ‘Same Olds’, and when that club folded started the 1897 season with Boroondara.

This proved to be a momentous year for Arthur Leach. He was called up from Boroondara to make his VFL debut for Essendon in Round 9, playing up forward and acquitting himself ably. Just a week later he was accepted to practice as a barrister and solicitor. But that’s where the good news ended: he managed only four games with Essendon, missed the team’s finals campaign and was described by Leader’s ‘Follower’ as being “rather of the solid than agile order”.

It wasn’t a promising start. But Collingwood had seen something they liked, and encouraged Arthur to join Fred at Victoria Park for the 1898 season. He didn’t get to pull on the black and white jumper until Round 5, but fitted in so beautifully that he almost immediately became a regular fixture, playing the next 53 games in succession.

During these days Arthur played mostly as a forward-follower, though that balance would shift in the years ahead. In 1899, Punch described him as “one of the smartest forwards playing”.  The Mercury noted his “cleverness and brilliancy”, while Punch also commented on his “brilliant rushes”.

By 1901, his standing in the game had grown to the point where he was chosen to represent the VFL in an exhibition match against South Australia in Adelaide. All this occurred while his new startup solicitors business, ‘Leach and Thomson’, began to flourish out of offices in Bourke St.

His football career was also flourishing, his versatility highlighted during the 1902 premiership campaign when he filled in at full-back late in the season against South Melbourne before moving onto the ball in the last quarter in a starring role. He then kicked two goals as a forward against Fitzroy the next week before again playing forward on grand final day.

The Collingwood juggernaut rolled on in 1903 and Leach began to play more games in the ruck, a move that signalled the start of a golden period in his career.

Veteran trainer Wal Lee once described him as being “as strong as a lion”, and he put that strength to great use while forming a brilliant ruck combination with rover Dick Condon and tap ruckman George Angus, the trio operating with a secret code of signals to indicate where each would be at every contest.

His role in the ruck required him to be tough, but despite dishing out plenty of bumps he maintained a reputation for scrupulous fairness. He was also remarkably restrained. After one game in which he’d been struck “deliberately and repeatedly…in the most foul manner” by South Melbourne enforcer Bert Franks, Leach responded not by hitting back or mouthing off, but instead by simply outplaying his opponent. “Leach, with highly creditable and amazing self-control, contented himself by repeatedly beating his assailant in play, and thus humiliating him perhaps more satisfactorily than by striking him in return,” reported the Age. The Leader observed that Leach’s response, or lack of it, avoided a near-certain “riotous scene”.

That Leach was targeted by opponents was not surprising, because he had become a key player for the Pies. ‘Observer’, writing in the Argus in 1907, was clear about his impact. “When Arthur Leach was in it theirs [Collingwood’s] was a very good ruck, when he was out it was not good.”

Other observers concurred. “Arthur Leach, the cavalier of the ruck, is still sustaining his mountainous reputation as a cultured footballer,” wrote Punch in 1907. “He knows as much about the game as a fish dealer on Prince’s Bridge knows about opening oysters.” The Australasian added: “Leach was a power to he reckoned with at every stage of the game and in all departments. He was a veritable all-round genius.”

Collingwood was plagued by internal dissension in 1906, under the coaching of Dick Condon. When captain ‘Rosie’ Dummett hit a run of bad form and resigned mid-season, it was no surprise that the captaincy was handed to Arthur Leach. It was even less of a surprise that his appointment quelled the internal tensions – he’d always been a reasoned voice, and was well regarded by both players and administrators (he’d been a players representative on the committee since 1904).

He stayed as captain in 1907, enjoying possibly his finest year in football and adding another VFL representative game to his resumé, this time kicking five goals against a Ballarat league outfit. He looked set to go around again in 1908 before surprisingly deciding to retire on the eve of the season. He held himself ready to play if needed through the year, and was called up again for the last couple of matches.

He became a vice-president of the club in 1909. This was meant to be his first full non-playing season, but such was the respect he had garnered and his ability to stand up in big matches that he continued to train in case needed for the finals. He even accompanied the team on their trip to Sydney midway through 1909, using the trip as a honeymoon with his new wife Louise. But he injured his knee playing in a practice match up north, ending any hopes of yet another finals comeback.

That really was the end of Arthur Leach’s playing days. He remained a vice-president until the end of 1910 and continued as the club’s honorary solicitor, a role he’d filled since 1902, until 1947, shortly before his death. He continued to develop his solicitor’s practice, and became a well-known member of the Masonic Lodge. He died in a private hospital in Camberwell on 1 October, 1948, aged 72.

In 1910, the Argus’ ‘Observer’ presciently proposed an early version of the Match Review Panel, with an independent “censor” of games to focus on violent incidents and the field umpire to devote himself to ordinary breaches of the rules (such foresight!). The writer suggested that Arthur Leach would be ideal for the role of censor, and nobody disagreed. That was a testament to his standing within the football community – one of the most respected men in the game, and a great contributor in a variety of ways to the Collingwood cause.