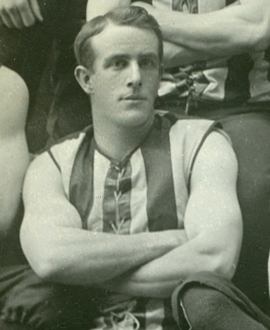 When you’re new to a footy club, it’s usually expected that you’ll keep your head down and gradually try to win the respect of your new teammates through hard work and commitment at training and on match days.

Or, if you’re Artie Robson, you can have a stand-up fight with your captain on the field during just your fourth game.

Arthur Henry Rennison Robson ventured to Victoria Park midway through the 1900 season. He had been playing with Richmond, but in June that year made his way to Collingwood Juniors for a couple of games. So good were his performances that he was able to force his way into the senior team for the Round 8 game against Fitzroy.

Robson was a tall, strongly built chap, and he was initially tried in the back pocket and at centre half-back with reasonably encouraging results. The Magpie selectors threw him into the ruck for just his third game, and it was as a follower/forward that he showed even more promise.

He really made his mark – in more ways than one – in his fourth game, against Essendon at Victoria Park. That was the day he kicked his first-ever goal, and also ended up in a fist fight with his captain, the legendary – and combustible – Dick Condon. The Argus reported afterwards: “There is a good deal of growling going on in the magpies’ nest just now, and … there seemed to be several discords in the harmony of the team. So much is this so that at three-quarter time the Collingwood captain, Condon, and one of his forwards, Robson, came to blows, and it took Freame (the umpire) all his time to separate them.”

While sparring with your captain is never a good idea, it’s perhaps telling that the incident didn’t spell the end of Robson’s career (Condon himself was only weeks away from a string of further incidents that would initially see him banned for life by the VFL). Indeed if anything it sparked him into life.

He played all seven games for the rest of the year, kicking 10 goals along the way, including two bags of three. In a short time he’d seemingly made the role of big forward, taking some spells in the ruck, his own. Reports of the day indicate he was a strong mark and a decent kick. He finished his debut season with a very creditable 11 goals in 11 games.

But his seemingly promising career was interrupted early in 1901 when he decided to join the Boer War in South Africa as a trooper. He joined a unit known as the Second Scottish Horse, which was formed when Lord Kitchener called on men throughout the Commonwealth of Scottish heritage to join up. He was one of 300 or so who joined up in March 1901.

He didn’t enjoy the best of luck early, and he suffered two broken ribs when his horse was shot and rolled on him. Recuperating in hospital in April, he sent a letter home which was posted in the Victoria Park dressing rooms saying: “Please accept best wishes for the success of the Collingwood Football Club during the forthcoming season. Kindly remember me to all the players and members of the club.— Yours truly. A. ROBSON.”

In the end, Robson was only in South Africa for a few months, and remarkably was back playing with the Magpies before the 1901 season was out. The club presented him and two fellow returning teammates with gold medals as a mark of respect. He played only three more games, but once again found the goals regularly, adding four more for a career rate of better than a goal-a-game.

He tried to get to South Melbourne in 1902 but the VFL refused his clearance. He returned to Richmond in 1903, and in 1905 moved to Tasmania, where he married. He captained the northern Tasmanian team that played against Collingwood when the Magpies visited in 1906, renewing many not-that-old friendships. He would eventually return to Melbourne in the 1920s.

Artie Robson wasn’t at Collingwood for long. But even in that brief time he showed he could play footy, and by getting involved in an on-field stoush with Dick Condon he ensured that his name would have a permanent place in the club’s history books!