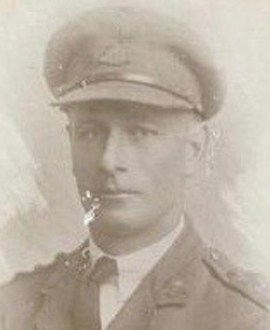 Barney Meadway had two sporting passions in his life – football and trap-shooting –and he reached the highest level in both of them.

But while his association with football was fleeting, at least in terms of his VFL participation, his achievements in shooting was longer-lasting and took him to almost all corners of the globe.

And his sporting prowess helped to play a role in the service of his country in what would be a far more important contest.

Meadway had the distinction of being one of those rare footballers who has represented both Carlton (1906) and Collingwood (1907), sitting on either side of the game’s most intense rivalry.

But he would enjoy greater longevity as one of the country’s greatest shooters, honing skills he had first developed in the bush as well as serving his adopted country on the battlefield.

Meadway wasn’t born in Australia. He was born Charles Bernard Meadway in Dunedin, New Zealand, on October 16, 1879 and came with his family across the Tasman when he was only six years of age.

Life was tough for the young boy known as ‘Barney’ in Bendigo and later Wangaratta. His father, James Charles Meadway, died when Barney was only 10, and as the only son among five sisters, he had to leave school at an early age to help the family survive as Australia headed into the 1890s depression.

He worked as a painter in Wangaratta and used his time after work to develop his sporting talents, which were greatly respected in the town.He was 22 when he first chose to represent Australia, by enlisting in the 6th Battalion Australian Commonwealth Horse on April 26, 1902. But before he could get the chance to head to South Africa and fight, the Boer War came to an end within a month of his enlistment.

Four years later, Meadway would play his one and only game with Carlton. The following year he was playing with Collingwood, and it looked as if he was going to make an impression in the black and white.

He played three successive games – from Rounds 9 to 11, 1907 – and gave a hint of the form that he had shown in the country leagues.

Before that first Collingwood game, he had been the star of the Wangaratta Easter ‘Sparrow Shoot’, with the local newspaper saying he had “established a world record, shooting 108 birds without a break”.

It might not seem politically correct more than a century on, but Meadow was a product of his time, and of his environment, and he was an exceptional sharpshooter.

On the football field, he was the opposite, as a close-checking defender, and he won praise in the Prahran Telegraph for his “conspicuous” work in his first game and for being “one of (Collingwood’s) chief supporters” in the back half of the ground.

But opportunities dried up after only three games for the club. His time with Collingwood was brief, and he was content to head back to the land, to concentrate on playing bush football and his shooting.

Meadway was rising 36 and single when he enlisted in the Australian Expeditionary Forces on September 13, 1915. This time he would get to fight abroad that had eluded him more than a decade earlier.

He sailed from Australia in November 1915, and he would join the Remount Unit, which was responsible for the welfare of the thousands of horses in the deserts of the Middle East.

A letter to the secretary of the Wangaratta Gun Club in late 1916 gave a hint of Meadway’s experiences: “I have, like the majority of the boys, had a bout of sickness and am just on my legs again. I was out at the (Cairo) Gun Club on Sunday and took photographs of two of the best shots in Egypt.

“You will be amused to learn the way they do things at the Cairo Gun Club. As soon as I said I was a member of the Melbourne Gun Club, they could not do enough for me. They would yell: ‘C’mon Australia, you play’.”

Then, in mid-1917, he explained how he had “competed in the Egyptian championship … (he) tied with Mahomed Bey, but lost in the shootout.” He received a gold watch and 19 pounds for his success, but was considered unlucky not to win as one of the birds he had killed had been blown onto the top of the fence, which “lost (him) the championship.”

When the war end Meadway helped with the repatriation of men before finalising his return to Australia in 1919 and becoming a successful businessman as well as a crack shot on the international stage.

He won his first Australian championship in 1920, the first of what would be six live bird championships. And he represented his country in shooting on a number of occasions, heading three times to Monte Carlo, where the world’s best would congregate and compete.

Incredibly, he would win a Commonwealth Mixed Bird competition in the 1940s, when he was in his early 60s. In all he won more than 50 major championships throughout his career.

His football career with Collingwood might have been fleeting, but his passion for shooting meant he would be considered one of the greats of his other chosen sport.