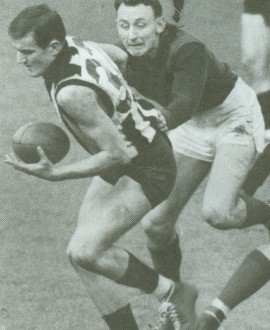 Collingwood’s 1958 Premiership is perhaps the most famous of all the club’s flags – a miraculous, against-the-odds victory that protected our cherished four-in-a-row record.

And one man chose that day to play the best – and certainly most influential – game of his 56-game career, thereby guaranteeing him a place among Collingwood’s immortals.

Barry Harrison’s rough, tough and aggressive performance that day has since passed into football folklore. But he had always played his football that way, right back as far as his schooldays at St Bede’s where he was frequently censured by the Brothers for playing the game too vigorously. “They were always getting grumpy with me,” Harrison said in a 1991 interview. “But as far as I was concerned if someone was in your way you didn’t go around them, you went through them – no matter where you were playing.”

Never was that better demonstrated than on Grand Final day, 1958. Collingwood had not beat Melbourne in any of their previous ten meetings, and in the second semi had gone down by more than seven goals. On paper the Demons seemed invincible.

But Hooker and a few of his mates had other ideas. While some of the older Collingwood players thought Melbourne almost unbeatable, Harrison and the other youngsters held fewer fears; they were just another team of footballers. Indeed the first time Harrison had been assigned to tag Ron Barassi during a game, the other players had to point the Melbourne legend out to him! Harrison had already hassled Barassi with some success in the second semi-final, and for the Grand Final was told to step up the treatment. Hooker went everywhere with Barassi, punching the ball away whenever it came near, niggling him, holding him, bumping him, scragging him and, occasionally, giving him a whack for good measure.

At quarter-time, with Collingwood already three goals down, Murray Weideman and Harrison decided to turn up the heat. Bill Serong and others followed their lead and soon there were Melbourne players hitting the deck everywhere. The Demons responded by seeking revenge; Collingwood just worried about the ball and piled on 10 goals in two quarters to seal the game. Whenever Melbourne looked to Barassi to lift them with the leadership he usually provided, he was too busy trying to deal with Hooker.

It was an outrageously brazen theft of a Premiership that logically should never have come to Victoria Park. And few played a bigger part in that theft than Harrison, who started any number of fights but wisely left the Melbourne players trying to finish them. He was reported for hitting Barassi but, much to the chagrin of Melbourne fans, escaped with a reprimand.

Harrison’s performance that day turned a battler into a household name virtually overnight. At the end of just his first season of football, he seemed destined for a long career.

That Harrison was playing football at all was a major achievement in itself. He had suffered from polio as a child and was still wearing a caliper on one leg until shortly before his senior debut at Collingwood. The only time the support was off was when he was playing sport – and that was frequently. In addition to football, he was a champion swimmer who won a number of State titles, as well as being handy at cricket, tennis and basketball.

Harrison had played footy with Mentone seniors as a 16-year-old, and got his first taste of reserves football at Collingwood late in 1954. But National Service called in the next two years, and when he returned to footy in 1957 it was again with Mentone. His performances there were good enough to earn him an invitation to Collingwood’s pre-season in 1958, at the relatively old age of 22.

Remarkably, Harrison walked straight into the firsts for the opening round of 1958 and missed only one game for the season. He played mostly as a ruck-rover, taking tap-outs from the ruckman (usually Graeme Fellowes), then getting a handball out to a running player a little further from the crushes. He was also expected to create “holes” in the packs for the smaller players to run through, and to do a fair bit of the ruckwork at boundary throw-ins.

He was tall enough, at 188cm (6ft 2in), and had a wiry frame which was much more robust than it looked. He was an excellent mark, especially in one-on-one contests, and a vastly underrated tap ruckman, whose skills in hooking the ball back from boundary throw-ins earned him his famous nickname “Hooker”.

He wasn’t an overly skilful player but whatever he lacked in that department – his kicking could be especially erratic – he more than made up for in ferocity. Barry Harrison was nothing if not a fighter, and he believed that if you did not play the game hard there was not much point playing at all. By midway through his first season he was already a man opposition teams had learned to fear.

Unfortunately, his Grand Final heroics proved to be something of a double-edged sword. He played another 30 or so games over the next three years, but was dogged by injuries. The reputation he had gained from the Grand Final also acted against him, and he found himself the target of opponents, fans and even umpires. In 1960 he was viciously decked behind play against South Melbourne and, landing unconscious in a puddle of water, nearly drowned.

His Collingwood career ended when the club dumped him as part of a pre-season cleanout in 1962. He went to Moorabbin and Sandringham, and also played one game with North Melbourne a couple of years later.

But nothing ever matched his exploits from that cold, wet afternoon back in 1958. Ironically, though, one of that year’s great heroes may also have been an unwitting victim, for the legend that built up around his performance that day was such that a “normal” career was next to impossible.

In the end, though, Hooker had the last laugh. There are plenty of players who enjoyed better or longer careers than Harrison, but whose names are not as well known today. Collingwood’s 1958 Premiership win, achieved against all the odds, is simply a great sporting story, and one of the club’s proudest moments. Because of that, the win will live forever in football history, and in the hearts and minds of Collingwood fans; so, too, will Barry Harrison’s part in it.