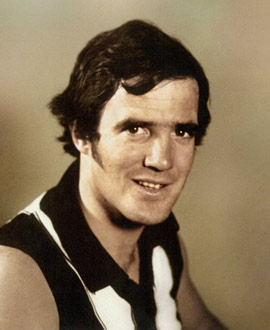 In these days of team defence and zoned structures it seems quaintly old-fashioned, but few sights electrify fans more than that of a player streaming through the centre of the ground and planting a pinpoint pass on to the chest of a leading full-forward. It feels like old-fashioned footy: simple, yet beautiful.

Rarely has that scenario been played out more frequently, or more adroitly, than by Barry Price and Peter McKenna during Collingwood’s heady days of the late sixties and early seventies. McKenna and Price formed a lethal combination that became the bane of opposition defences.

McKenna was, of course, a famously good lead. But it was Price’s delivery of the ball which made those leads effective. McKenna only needed the smallest break and he knew Price would put the ball in exactly the right position. With other, less talented midfielders, the margin for error might have been too small. But not with Price.

“He could find you with a 60-metre low pass,” said McKenna, “which made it impossible for opponents. Once you led to a Price pass there was no way a full-back could stop you. And there was no way you could miss it unless the ball bounced off your chest. Price used to hurt me with his magnificent drop kicks and drop punts — sometimes the lacing of the ball would hit my chest so hard I would have red marks there for days.”

Barry Price was born and grew up in Ararat and, though he was Collingwood-mad from an early age, rarely made it to Melbourne to see games. From the time he was old enough to walk, Price and his football were inseparable. He would kick with his father, his brother (who was good enough to earn trials with both Collingwood and Geelong), with his mates and by himself (when he would pretend to be Murray Weideman).

His parents were among a group of locals who started the town’s first organised under-16 team, and the 11-year old Price soon became a member. He did well over the next few years and by the time he was 16 was playing with Ararat’s senior side in the strong Wimmera League. In his first and only year with the seniors, 1965, Price won the team’s best and fairest award and kicked 60-odd goals. Performances like that soon had eight VFL clubs beating a path to his door.

Price and his parents had decided League football was out until the end of his schooling, and that is what they told all eight clubs. Then came the ninth club — Collingwood — and all resolve disappeared. Fittingly, recruiter Jack Burns found Price practising in the backyard, aiming his already deadly kicks at a jam tin he had suspended on a line strung between two posts.

In his first practice match in 1966 the kid nicknamed ‘Bubba’ because of his lack of size lined up on the notorious Duncan Wright, who was still trying to live down the odium of the Somerville incident the previous season. Price survived that experience and kicked three goals, and eventually made the senior list. And he was in the senior side after just one round, playing as a forward pocket/rover against Fitzroy. He lasted only a few games before being dropped but, back in the reserves, was tried in the centre and just “clicked”. When he returned to the seniors late in the year it was in the pivot position, and he did well enough to hold his place right up to the death knell, being dropped from the winning second semi-final side.

Things stagnated a little over the next two years: 1967 was reasonable, but torn ankle ligaments restricted him to just five games in 1968. But a tortuous pre-season that began in October — almost unheard of in those times – saw him jumping out of his skin by the time season 1969 rolled around. He played brilliant football that year to win the Copeland Trophy, and became so convinced of the merits of the intense pre-season that it sparked a lifelong commitment to the values of physical fitness.

The 1969-70 period was probably Price’s best, his play in those days earning him a reputation as one of the game’s most talented footballers. In addition to his kicking he was highly skilled in other areas of play as well. His handball could not be faulted, and his general ball-handling was superb. He was a decent mark for his size and had immense courage, never flinching from the battering his small frame took over the years.

Price also had wonderful evasive skills, especially a body feint which would often send opponents the wrong way. He had an unusual way of running with the ball; his arms extended as if preparing to kick, his hands holding the ball and moving it in small circles as he ran. He would run at a player, looking like he was going to kick, then dip his shoulder and change direction in a flash. The sidestep would just take him out of the way of the oncoming opponent, and Price would take a quick bounce (another great skill) and look upfield.

Price never really lost his natural reserve, and was regarded as one of the quiet men of the team. But the admiration for him among his teammates was universal. “He was one of the most gifted players at the club, but also one of its true gentlemen,” said Terry Waters. “He was very quiet both on and off the field but by hell he could play, said coach Bob Rose.”

Following more good years in the early seventies, Price’s form began to falter. Although still only 26 he was jaded and felt he needed a new challenge. So at the end of 1975 he enrolled in a physical education course in Western Australia, and began a three-year stint with Claremont. He came back in 1979 but a pre-season ankle injury interrupted his preparation and kept him to just one senior game (though he was part of the night Premiership). He spent two years with East Burwood in the Eastern District Football League and one season at Prahran before returning to Collingwood as skills coach and fitness adviser from 1983-85. He also became a long-standing coach of football teams at Scotch College.

It seems hard to believe that the VFL career of one so fanatical about the game all but ended at age 26. There were many at Collingwood who would love Barry Price to have had a longer stay — not least the forwards whose careers would surely have flourished by being on the receiving end of his passes.