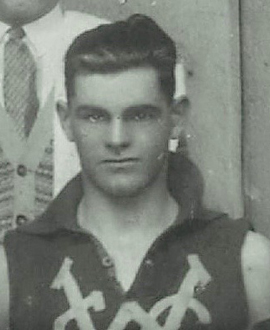 It can’t have been easy for a young player to break into the Collingwood team in the 1930s. Even in their relatively fallow period early that decade, the Magpies were still a formidable outfit.

But things must have been even tougher if you were also being touted as the next Syd Coventry.

That was the burden which fell onto the young, broad shoulders of Gippsland boy Bernie Guthrie in 1933.

At 184cm and 84kg, Bernie was one of several big men recruited by Collingwood to bolster their ruck stocks in 1933. He came from Wonthaggi team South Dudley, having been born in a little mining town about 15km from Wonthaggi called Outtrim. His dad was a miner, first at Outtrim and then Wonthaggi, and Bernie followed suit at age 14. Bernie and his brother Tom played in a premiership side for the Wonthaggi Football Club in 1929.

He was still working in the mines when Collingwood came calling in 1933. He was a strapping young man, quick for his size and with a deadly left foot. He did well in the practice matches and played the first two games of the season, returning for a further five later in a campaign interrupted by a couple of minor injuries and a battle with a septic throat. He kicked five goals in those games too, representing a handy return for a first taste of League football.

The Magpies held high hopes for him entering the 1934 season. But senior opportunities proved hard to come by in the first half of the season, and other clubs started sniffing around. That’s when Collingwood made it clear that they had big plans for Bernie.

In July, a brief story appeared about him in the Sporting Globe. It said in part: “Collingwood selectors only keep the right material around their camp and one being kept in reserve is Bernie Guthrie, a hefty young fellow standing 6.1 and weighing 14.3. The Collingwood side is a hard one to get into but Guthrie is waiting on the doormat and when he gets his chance he will make the most of it. Several other clubs have been after this young giant but the ‘not for sale’ notice is on him. Bernie swims and takes up running in the summer to keep fit. His unassuming manner has made him a lot of friends at Collingwood, where Syd Coventry’s ruck mantle will eventually fall on his shoulders.”

It’s hard to believe that the story wasn’t deliberately planted by the Pies to ward off potential suitors, and also to keep Bernie encouraged. But unfortunately, the encouragement he really needed was more senior game time, and that wasn’t forthcoming. He’d played mostly as a forward/ruck in his first season – placing him ideally to take over from Syd – but by 1934 another young forward/follower called Phonse Kyne had emerged, providing Guthrie with a new obstacle.

As a result he couldn’t win a senior spot in 1934. But he started the 1935 pre-season with a bang, being named as first ruck in a practice match against Richmond at Olympic Park on 5 April (a match that was famous for being only the second VFL game to have been played under lights). Just three weeks later, however, the Magpies approved his transfer to Northcote, and his Collingwood career was over.

The same couldn’t be said of his VFL aspirations, though, and in 1936 he re-emerged to play 16 games across two seasons with North Melbourne, kicking nine goals along the way. He left North to coach Yarram midway through the 1937 season, but trialled with both North Melbourne and South Melbourne prior to 1938 without success. He ended up at Fitzroy briefly in 1939 but didn’t play a senior game.

Incredibly, there was one last spark in his Collingwood flirtation, when he played under Ansell Clarke in an amateur match at Olympic Park for ‘Collingwood trials’ in 1940. But once again, nothing came of it. He stayed in Melbourne, driving trucks and later becoming a foreman.

Bernie Guthrie’s career at the elite level was one of ‘nearly’ and ‘maybe’. He seemed to have all the natural tools to have been, if not the next Syd Coventry, then at least a good, solid VFL-level footballer. But his final tally of 23 games and 14 goals probably didn’t do him justice.