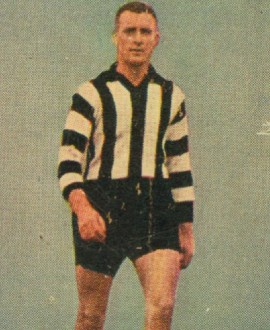 Bervin Woods played more than 100 games in his six years with Collingwood, including two Premierships and three further Grand Finals. He also won a best first year player award. But all that is seemingly forgotten whenever his name crops up because, no matter how good his playing career, there’s no way it could ever match the drama and improbability of the events that surrounded his eventual exit from Victoria Park.

That moment came in April of 1950, 10 years after he’d hung up his playing boots. Woods, a loyal and likeable bloke, had taken a seat on the committee straight afterwards. A few years later he started coaching Collingwood’s reserves team, where he established a solid reputation as a decent coach. He was still in that role when Jock McHale – almost out of nowhere – finally decided to retire as senior coach on April 3, just weeks before the start of the 1950 season.

His decision must have caught the committee slightly by surprise, because just a few months earlier secretary Frank Wraith had publicly dismissed any suggestion that McHale would not be coaching again in 1950. Still, the Magpies had an obvious successor on hand: captain Phonse Kyne was one of the club’s greatest-ever players, a natural leader and beloved by both the fans and his teammates. He was also coming to the end of his playing career, and had made clear his desire to coach in the VFL. It seemed like the classic no-brainer.

But it later became known that several senior club figures had virtually promised the senior job to Woods some years before. The result was a split committee, with president Harry Curtis casting the deciding vote in Woods’ favour. Cue a bloody revolt that saw the club torn apart, old friendships ruined, half a committee thrown out and three coaches in charge in as many weeks.

Newspapers reported that Kyne’s football colleagues and friends were ‘boiling with indignation’ over the decision. Ron Todd, himself no stranger to controversy, said it was “the greatest injustice yet perpetrated in football.” There was civil war among the committee members, with various factions leaking to the press so that everybody knew exactly which way each member had voted. There was also uproar among supporters, and within hours of the decision having been made public the members had organised a special general meeting to protest the decision. They wanted Phonse Kyne and were openly in revolt against their club.

The scale of their anger was most evident two days later at an intra-club practice match at Victoria Park. Kyne had initially accepted the club’s decision but then changed his mind and announced his retirement. When he turned up at the practice match he was mobbed, cheered wildly and then hoisted onto the shoulders of supporters. It took him more than 20 minutes to walk the last 50 metres as he tried to make his way through the throng of fans. Woods and his supporters, on the other hand, were booed, jeered and heckled. A former player had to intervene to stop two people coming to blows. Victoria Park has never seen anything like it.

Woods, to his credit, saw the writing on the wall and resigned the day after the practice match, in the hope of restoring some unity to the club. He had been in the job less than a week. His predecessor had lasted 38 years.

That brought an end to Bervin Woods’ 15-year association with the Magpies. He was born at Koondrook, on the Murray, and didn’t really play footy until he was a teenager with the Border team. The Depression dried up work on the family property, so Woods came to Melbourne in 1929 and tried to get a game with Richmond. He spent a couple of years there on the supplementary list but never cracked it for a senior match, so crossed to Brunswick in the VFA. But then he was offered £5 a week to coach in Mortlake, so it was back to the country.

After an outstanding year at Mortlake, Essendon sought him out for a trial, as did Collingwood, who had been alerted to his abilities by a contact at Brunswick. The Pies were looking for a defender/follower to fill Syd Coventry’s role and Woods fitted the bill perfectly, exciting onlookers during intraclub practice matches. Despite being a mature-aged recruit at 25, Woods walked straight into the team and missed only one game in what turned out to be a Premiership season. He was also part of that year’s tour to Sydney and Brisbane, where the Pies played games against South Melbourne. That trip helped to make him as a footballer: he got to know his teammates better, grew in confidence and played some excellent football.

Though not especially tall (he was about 180cm), Woods’ great strength was his marking. He had wonderful hands, a good leap and outstanding judgement. He was a long if not particularly scientific kick, reasonably agile and loved the physical side of the game. He was good at breaking up packs and throwing his weight around. He played almost exclusively in defence, mostly in the back pocket or half-back flank, but he was also very effective when used as a follower. He was by no means a star but he was consistent, solid, steady and durable, missing only a handful of games in his first five seasons.

But the late start to his career meant Collingwood was never going to get a long VFL career out of Bervin Woods. He started to slow down during the 1940 season and retired at the end of the year, immediately moving to coach Abbotsford (the club’s unofficial thirds team) before returning as reserves coach and heading down the path that would eventually lead to the tumultuous events of 1950.

Those events scarred Woods for life. He had done nothing wrong other than being a loyal and dedicated servant both onfield and off, whether as player, coach, committeeman or even umpiring in the famous Collingwood schools competition. Yet he inadvertently found himself caught in the middle of one of the biggest storms that has ever engulfed the club. About the only good thing that came out of it, at least according to legend, is that he was given a pub by John Wren for all the grief he suffered! But as one who loved the club – and Bervin Woods really did – he would surely have preferred a successful reign as senior coach. Sadly, he never got that chance.