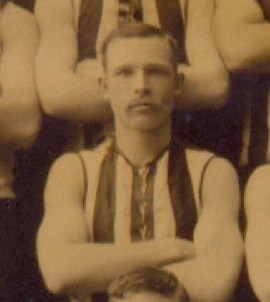 Collingwood has a few well-known examples of players injuring themselves at training in the lead-up to a Grand Final, being forced out of the year’s biggest game in heartbreaking circumstances.

But perhaps the least well known occurred way back in 1896, as the Magpies were zeroing in on their first ever Premiership. This was back in the VFA days, when the flag went to the team that finished on top of the ladder. When Collingwood and South Melbourne could not be separated at the end of the regular season, the game’s first Grand Final was scheduled.

But Bill Arnott wouldn’t be there. The solid defender, who had not missed a game in the two years he’d been at the club since arriving from Richmond City at the start of 1895, injured himself at training in the week leading up to the decider, and had to watch from the sidelines as his teammates triumphed.

That must have been shattering for a player who had become an integral part of the team in the two years he’d been there. And he never played for the Magpies again after that, instead heading west and eventually finding himself part of one of the most famous fighting units of the Boer War.

Bill was born in Castlemaine and was described as “a rattling junior” when he arrived at Victoria Park in 1895. He initially played with junior club Vaucluse and went from there to Richmond for some games in 1893. He returned to Vaucluse, by then known as Richmond City, and played there in 1894, kicking four goals for the season. He tried out with Carlton in the 1895 pre-season but eventually chose to throw in his lot with Collingwood.

He quickly established himself in the Magpie line-up, most often playing on a half-bank flank or in the back pocket. “He is a clean and clever player, with sound judgement,” said The Argus that year. “A capable defender,” said The Australasian, “and one of their best back men. He marked well and often.” The Herald described him as one of those “sterling players who do much but say little.”

He was also one of the most consistent Magpies, playing every game in his first two seasons and rarely putting in a bad display. He was rarely best-on-ground either, but his teammates came to love his reliability and no-fuss approach to defending. He was also a whole-hearted performer on the track, and he won a prize at the end of the 1896 season for “regular attendance to his training”.

He continued to display high level form all through that year, and The Australasian nominated him as one of the Magpies’ “most serviceable” men over the course of the year. He would have been a certain selection for the Grand Final against South Melbourne. But disaster struck in the final training session, as The Herald reported on the Friday before the game: “Collingwood have been unfortunate In losing the services of their powerful half-back man, Arnott, who on Thursday met with an accident at practice.”

Surprisingly, that’s where Bill Arnott’s Collingwood career ended. He went to WA in 1897, where he spent two seasons with Rovers and then spent some time with East Fremantle in 1899, although he returned to Melbourne and played one game with Carlton (coincidentally, against Collingwood) late in 1897. He also flirted with the idea of a return to Collingwood in 1899, with he and his brother both named in a squad to play a game for the Pies against a combined juniors team in April of that year. But in the end he returned to the west and played for East Fremantle that year.

While he was in WA, the Boer War broke out. And when Lord Kitchener called on men of Scottish heritage throughout the Commonwealth to join up, Bill was quick to do so, being accepted for the Imperial Bushmen’s Contingent in 1900, a unit which usually required enlistees to be good shots and fine horse riders. Bill subsequently became part of the Scottish Horse, part of the Imperial Bushmen’s Contingent formed in the wake of Kitchener’s call.

Even though it was by then four years since he’d been at Collingwood, the club presented Bill with a valuable pair of field glasses, and Tom Sherrin Snr gave him “a punching ball for the benefit of himself and his companions during the voyage.” When he returned from South Africa late in 1901, he was a guest of the club at a game (along with fellow servicemen Artie Robson, who had resumed playing, and Ted Absalom) and presented with a special gold medal.

That shows the esteem in which Billy Arnott was still held at Victoria Park. With any regular luck he would have been a part of our historic first Premiership team, but his efforts in the two seasons leading up to that day more than entitled him to take a share of the credit just the same.