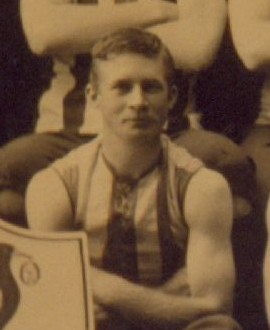 Of all the players who appeared with Collingwood during the VFA days, none remained involved with the club as long as the popular figure of Bill Balfour.

Bill started as a player in 1892 and enjoyed a stop-start career over five years that was short-circuited by injury. And when he was forced to retire from the playing fields, he immediately took over as Collingwood’s doorman and press representative, roles that he maintained for nearly 50 years, in what turned out to be an extraordinary example of life-long commitment to the black-and-white.

His life at Victoria park started in the club’s first year, 1892, making his debut in the back pocket for the Round 6 game against Richmond, having been recruited from the junior club Clarence. The Sportsman was impressed, noting succinctly the following week: “Collingwood has a good player in Balfour.”

And so it proved. He was a dashing small defender who also spent plenty of time forward, and wherever he played he brought energy, speed, and general smartness to the game. “Though a lightweight, he is a ringer,” said The Sporting Standard in 1892 “He makes things hum when he is fairly on his mettle.” He was also tough, and one newspaper criticised him for “playing the man” too much. But that was never going to lose him friends at Collingwood.

He played his first 10 games straight in 1892 before missing the last couple. He played five of the first six in 1893, before injuring his leg while playing in a midweek game against the Electric Telegraph. That forced him to miss most of the rest of the season, and his absence was significant enough for the club to bemoan it specifically in its annual report later that year. He did try to come back in the second last game of the year but his leg “went bung” again soon after the start.

What happened to him in 1894 is something of a mystery, in part because it seems there was another Bill Balfour playing that year, with a junior club called South Yarra. It has generally been held that Collingwood’s Bill played in the Magpies’ first game of the year, against Geelong. But there is now some doubt about that version of events, with the possibility that the Balfour who played that day could be the South Yarra version, or potentially yet another Balfour – Henry – for whom a permit was issued midway through the year from Collingwood to Fitzroy Juniors. We may never know the true situation.

What is clear, however, is that the Bill Balfour who played with Collingwood in 1892 and 1893 returned to action with the Magpies in 1895. He played 11 games that year and kicked five goals as he spent more time in the forward line and on the ball. It looked like he was back for good, but injuries flared again early in 1896 and he was forced into a premature retirement.

That, however, was only the beginning of Bill Balfour’s service to Collingwood.

Almost immediately, Bill began a second Collingwood life, acting as press officer and doorman. Known widely as ‘Scotty’ or ‘Bal’ he was an immensely popular figure around the club, and within football more widely. Remarkably, he stayed on his doorman duties until the 1940s (by which time his nephew Don was playing with the seniors). He was awarded Life Membership in 1932 after 41 years service, and continued working for a further 15 years beyond that.

As The Australasian noted nearing the end of his stint: “Bill Balfour, who had to retire from the playing field in 1896, became the Press representative and custodian of the dressing-room then, and he still stands at his post and decides who shall enter that sanctum. [He is] A cheery and grand example of the sportsmanship of the old player. He was for years Press correspondent, and has guarded the door of the dressing-room for more years than either he or I care to remember.”

In 1946, Bill Balfour greeted his friends at the Footscray game at the Western Oval as usual, but collapsed the next day and died a couple of days later. This brought down the curtain on a lifetime of service to the Collingwood Football Club, first as a more-than-handy player, and thereafter as the kind of heart-and-soul official upon whose endeavours football clubs are so often built. He could not have done more in the black-and-white cause.