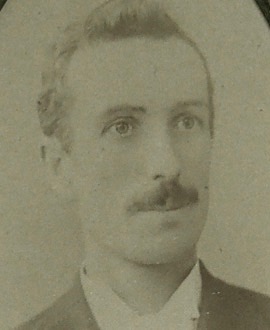 Beggs was a much travelled and highly skilled rover who spent only one season with Collingwood but might have spent many more had he not moved to the other side of town.

Beggs was born in Collingwood, and he would end up blazing a similar trail to that forged by his older brother Jim, who played with Britannia before joining Fitzroy, where he would enjoy a fine career and go on to be a vice-captain of the club.

Bill, five years Jim’s junior, started his footy with the local junior side, Clifton in the mid-1880s. Midway during the 1889 season, he was transferred to Britannia – at that stage the most senior club in the Collingwood district. He played some good football there, and in the 1890 season won a marble and gold clock for best all-round play.

Those performances were enough for him to be selected in the Combined Juniors team that played Carlton in a pre-season game in 1891. And he did well enough in that game to be picked up by Carlton itself. He was a regular in the first half of the season, and managed to kick four goals, a highly creditable achievement.

But there’s no sign that he continued with Carlton in 1892. Nor, however, is there any indication of where he did play. It remains something of a mystery – even more so when you consider that Jim, who had joined Bill at Britannia in 1890, was given a permit to play with the Magpies that year but didn’t play a game.

Bill next emerged when he was trying out with Melbourne ahead of the 1893 season. A couple of weeks later it was announced that he had decided to throw in his lot with Collingwood.

And his impact there was immediate. He played in the first game of the year and missed only one for the season, adding three goals along the way. He was regularly named as the team’s first rover, despite the presence of other renowned small men such as Harry Dowdall, Danny Flaherty and Bill Balfour. The Argus noted after one game that he had “marked and dodged in rare style, but hardly shone in his kicking.” The Sportsman wrote this after one of his best games of the season, against Melbourne: “His play would be greatly improved if he dropped his tendency for holding onto the ball and trying to run through his opponents.”

Overall, it was an impressive debut season for Beggs with the Pies. Still aged only 25, he seemed set for a decent career at Victoria Park.

Instead he moved to live in Moonee Ponds, and decided that the travel to and from Victoria Park was too onerous to justify. So he took up a position as captain of the Essendon District side, where he would prove to be a popular and successful leader. Later still he would go on to become the general secretary at St Kilda.

Billy Beggs spent only the one season at Collingwood. And as a local boy, and former graduate from the ranks of Britannia, he would surely have watched on with envy as some of his 1893 teammates went on to claim the club’s first ever flag just a few years later.