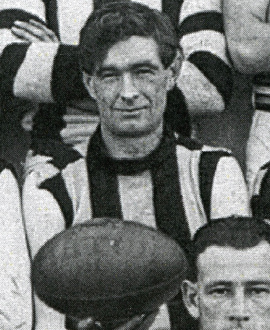 Most of the Collingwood players who played only a few games for the club came and went without arousing much outside interest – especially in the old days when footballers from local or country clubs could be brought in for short trials.

But some footballers just seem to grab the imagination. The end result might be the same – a brief career – but there’s a far greater ‘buzz’ around those few games.

Buckley was the classic case of the player about whom there should have been little fuss. He came from nowhere, played two games and then never played again. But for some reason he attracted far more column inches than his output justified.

Maybe that was down to the reputation he and his family had garnered in his home town of Fish Creek. The Buckleys were a big deal in footy at the Creek. His father, Paul, was a local councillor and dairyman and his mother, Johanna, regarded as one of the best known and most popular women in the district. Both were heavily involved in the football club – so much so that when Johanna died in 1933 on the eve of the local preliminary final, the team refused to play, as a mark of respect, and forfeited their chance to get to a grand final when the opposition refused to reschedule.

The Buckleys had seven boys, most of whom ended up playing with Fish Creek. Bill was the only one who made it to the VFL but all were more than handy players. And all were, to put it mildly, ‘colourful’. Fish Creek locals still recall the brothers as blokes who loved a drink, and a fight. Justin, a burly full-back, was renowned for taking up his post on cold days in his overcoat. He also kept a bottle of his favourite tipple beside the goalpost in case a swag was needed during the game. Another brother, Edgar, was once rubbed out for 12 months for kicking. And Bill himself was rubbed out in 1923 for “general roughness, tripping, disputing decisions, and for refusing to give the players’ names when asked by the umpire.”

Bill was captaining Fish Creek by this stage, and had become a dominant force in the centre (later in his career he would move to full-back). In 1924 he suddenly received the call to try out for Collingwood, along with another teammate called Patterson. One of former champion Ted Rowell‘s brothers had seen him playing for the Creek and alerted the Magpie selectors. He’d also been part of a Korumburra representative team that had played against Hawthorn at Glenferrie Oval in 1923.

In early June of 1924 Buckley was still playing for the Creek, but by the 28thof the month – after being spotted by Rowell – was lining up for the Pies against Essendon at Victoria Park.

His mere selection provoked excited talk of a promising career. He was a big man who played mostly in the ruck or as a key forward. A strong mark who was handy around goals, he was not a particularly long kick, but did much better over short distances (indeed he was a highly regarded stab kick). The Herald reported that coach Jock McHale had taken both Fish Creek recruits in hand at training on the Tuesday night before the Essendon game and said he was sure they would “deliver the goods”.

The Argus said: “They are expecting great things of Buckley, from Fish Creek, a big follower 6ft in his socks and weighing between 12st and 13st. He is a good mark, an excellent stab kick, has pace, and can turn. If that is not the description of a champion I have never heard one. There will be anxiety to see him in action.”

His compatriot Patterson never made it, but ‘Big Bill’ was named at centre half-forward against the Dons. And even though he was apparently ‘stage-struck’ before going out, his debut did nothing to dispel the growing excitement around his prospects.

The Herald said: “Buckley, of Fish Creek, had an attack of stage fright at Victoria Park when he saw what a large crowd had turned up to see Collingwood and Essendon play. Buckley did not altogether lose his head or nerve, and made an excellent start for a new chum. It took some persuasion to make him face the music, and when he got used to the surroundings he did very well for a bush boy. He is likely to improve with every match he plays.”

The Sporting Globe was even more impressed: “Big Bill Buckley, from Fish Creek in Gippsland, is pleasing the Collingwood supporters. He was played in the half-forward position, and was opposed to a formidable defender in [Tom] Fitzmaurice. For the first part of the game Buckley did well, and kept the Essendon man thinking. Buckley is a very fine stab kick—an art he learnt in the bush. He is considered to be one of the best stab kicks at Collingwood. It is quite unusual for a country player to excel in stab kicking; he generally has to be taught. Buckley is weak in his long kicking, but he has pace for a big man.”

Buckley started the game at centre half-forward and shaped well, taking some good marks. He was moved into defence in the second half, where the Football Record noted that “though palpably strange in his new  surroundings, he showed that  he has plenty of football in him.” The Age said he showed ‘good form’ on debut and ‘created a very favourable impression’, while the Australasian said he ‘came into prominence.’

Not surprisingly, given those reviews, Buckley kept his place for the next game against St Kilda – and that’s where it all ended. He was dropped after that game and returned to Fish Creek, where he was playing again by the end of the season. Whether he decided the city wasn’t for him, or the Pies made that call, is not known. But he remained a revered figure at Fish Creek, playing there until his late 30s.

Big Bill Buckley made a big splash at Victoria Park, but what looked like an exciting career in prospect ended almost as soon as it began. That’s a pity on many levels: not least because Collingwood would have been a much more colourful club with him there!