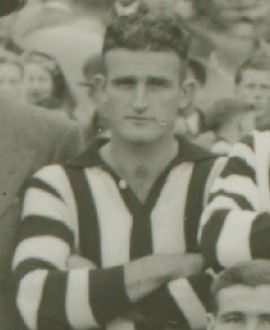 In April of 1950, Collingwood new boy Bill Welsh was pictured in the Argus newspaper being fitted with his new black-and-white jumper by head trainer Ern Reay, ahead of the season’s opening game against South Melbourne.

Bill had only been named an emergency that week, but he would get his first chance at senior level the following week against Fitzroy, making an immediate impact as a forward and holding his spot for eight straight games.

Then, against most expectations, he decided to head back home to the Latrobe Valley and resume his life there, turning his back on the city and VFL football.

What made the decision even more surprising was that it had taken a long time for Bill Welsh to even make it to Victoria Park in the first place.

He was born in Thorpdale but his family moved to nearby Yinnar, near Morwell, when he was just two. He learned early the need for hard work, working two jobs while at school. He was also one of the first Yinnar kids to go to Yallourn High School – a privilege that entailed him having to cycle 42km each day until a bus service was finally introduced. He played footy with Yinnar at 14 and first flirted with VFL football at the age of 16 when he trialled with Essendon – some 10 years before he eventually debuted with the Magpies. Further invitations came in the years that followed from Fitzroy, Hawthorn and Carlton, but nothing ever came of them.

Partly that was because of the Second World War. Bill joined the Australian Navy when he was 18 and spent three years in service, seeing action in the Pacific, New Guinea, Philippines, and Borneo.

But even around his War service, whenever a VFL club came calling, Bill was always more drawn to his home surroundings. So he focused on football with Yinnar and Morwell, where he established a name for himself as a high-scoring key forward with a good all-round game highlighted by solid marking and long kicking. He was playing coach at Yinnar in 1946, then crossed to Morwell the following year.

He was still playing at Morwell when Collingwood expressed interest in 1950. And this time, after some encouragement from former-Magpie-turned-Yinnar-local Ted Baker, Bill said yes. He trained at home and would come to Melbourne at weekends. Despite that inconvenience, he was elevated to the seniors after just one game with the seconds.

There was still one more hurdle, however. Bill’s permit from Morwell needed to be lodged with the VFL. It was available on the Monday, but Bill decided to pick it up on his way down to Melbourne on the Saturday morning. But he misjudged the Melbourne traffic and in the end only made it to VFL House to lodge the paperwork with three minutes to spare.

In a stroke of good fortune the Argus photographer decided to take a Collingwood team photo on the day of Bill’s debut against Fitzroy, and three weeks later a large, hand-coloured version appeared in the paper, showing Bill standing proudly alongside coach Phonse Kyne. He was named on the half-forward flank that day, and did well enough to keep his spot for the next week against Carlton, where he kicked two goals. The week after he was moved to full-forward against Hawthorn and kicked three more, prompting a slew of encouraging media stories.

The Age said Welsh was “regarded highly in the Collingwood camp because of his strong ground play, safe marking and long kicking.” The Argus said he had “great goal sense”. The Weekly Times said he looked like developing into “one of the best half-forward flankers in the game.” “Collingwood tried him at full-forward in several games, but he is too short. As a half-forward he is ideal. He has pace, dash and is a good mark. An athletic type – he is 5 ft. 10 in. and 13st.- Bill is a good position player with a fine goal sense.”

Bill beat Col Austen, who had finished runner-up in the Brownlow the previous year, in kicking his three goals against the Hawks, and was named amongst our best players against Richmond two weeks later as he kicked a brace.

But three weeks later it was all over.

He was injured in what would prove to be his last League game and decided he wanted to go home, the demands of his business proving too much. So the Pies reluctantly cleared him back to Morwell midway through 1950. Morwell went on to win the flag that year and Bill played a blinder, kicking four “mighty goals that will be long remembered”. He went on to play and coach in the region for many more years, and would later be named captain of Morwell’s Team of the Decade for the 1950s, and was inducted into the Mid-Gippsland League Hall of Fame. His son, Peter, would later enjoy a fine VFL career with Hawthorn and Richmond.

Bill Welsh became a leading community figure in and around his home town. He helped to revive Yinnar Football Club after the war, later serving as president, and played for and acted as president of both the cricket and bowls clubs. He was president of the local RSL, raised money for local community projects, was president of the Yinnar Recreation Reserve and served as a JP for more than 40 years. He even paid for the Yinnar Town Clock! He had been a storekeeper at Yinnar while at Collingwood (he had trained at night school as an accountant), and ended up running the Yinnar Farm and Hardware store with his brother for 37 years. In 2019, as he turned 95, a local park was named in his honour to mark his lifetime of community contribution.

That’s a remarkable community CV. And his Collingwood version might have been a little more impressive had the pull to that community not been as strong as it was. In the end the Magpies’ loss was Yinnar’s gain.