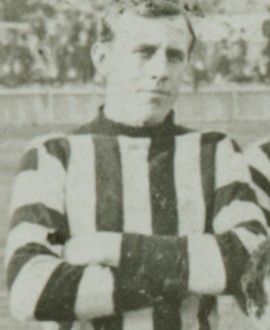 ‘Big Bill’ Carden was one of those players whose talents took him to the highest level, but not for long enough to make a lasting impression. Instead, he had to make do with a fine career at the lower levels.

Carden was a local product, born in Keele Street Collingwood in 1886. His dad, James, died when Bill was just 21, and two of his siblings died at extremely young ages.

At the time his father died, Bill was making a name for himself as a key defender with Prahran. At 5’9 ½ ” he was a tall man for his time, and extremely well built. Local newspapers regularly told of him “marking in magnificent fashion” during that 1907 season. “Prahran were best served by Carden, whose marking and general expertness were much admired,” wrote the Prahran Telegraph. “His brilliant high marking saved his team time and time again. He never once made a mistake.”

So good were Carden’s performances that Collingwood asked him down to have a run before the 1908 season. And he did well enough in the practice matches to grab a spot in the opening game against Geelong. But the Magpies lost, Carden’s performance was unremarkable and he was dropped. He came back three weeks later and was given a four-week run with the team, but again failed to make a strong enough case for retention. He was dropped again, this time for good, and the Pies eventually cleared him to Fitzroy Juniors midway through the 1909 season.

But that wasn’t the end of Bill Carden’s exposure to high-level football. In 1912 Port Melbourne recruited him from Fitzroy Juniors, and he proved an astute pick-up for the VFA side. He became a mainstay of the Port backline, and “a tower of strength in defence”, according to one newspaper. His marking remained a strong suit, and he’d also discovered that he could be an effective ruckman at VFA level. “His marking was exceptionally good and his following was of the best,” wrote the Port Melbourne Standard after one typically strong performance.

Carden was strong and not afraid to throw his weight around, leading more than one journalist to caution him against giving away free kicks. But in 1916, aged 30, Carden decided to channel that aggression towards helping Australia’s fighting forces. He had previously been knocked back due to vision issues, but made it through the second time. He was a sawyer by trade, and still living at home, when he set sail to join the 8th infantry battalion in November of 1916.

He spent most of his time in France, although he was continually troubled – and eventually hospitalized – by chronic synovitis in his right knee.

Bill Carden came back to Australia midway through 1919. His football career was over by then, the combination of increased age and debilitating knee soreness making a return to the fields impossible. But he’d done enough with Prahran, Collingwood and Port Melbourne – and for his country – to earn the respect of the football world.