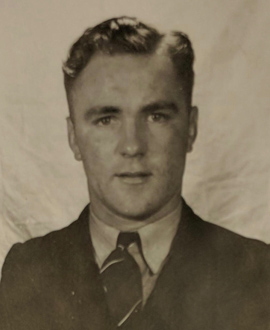 When Williamstown recruited the great Des Fothergill in 1941, they know they were getting one of the game’s most brilliant footballers. What they didn’t know was that they were also getting a part-time recruiter.

During his first season with the Seagulls, Des brought down with him a promising youngster who ended up playing senior footy with Collingwood and would surely have played more if not for the Second World War.

Bill Crane was a schoolboy footballing champion. He was an Alphington boy who attended the famed Victoria Park State School. At 16 he was playing with Abbotsford, and it was at that point that Fothergill took him down to Williamstown.

Crane initially played in the seconds, but soon got his chance at senior level, playing on a wing. After his first game, played as a 17-year old, the local paper reported that he “did not do so bad for a first game” and that he “showed promise”. He played semi-regular senior football for the rest of the year.

In 1942, with the VFA in recess, Crane enlisted with the RAAF, just after his 18thbirthday. But he still played football, initially trying out with Fitzroy, where he was described as “a good wingman from Williamstown”. But he seems to have finished up at Footscray, even though he didn’t play senior football there.

He had more luck in 1943, however, when he made his way to Victoria Park and found himself slotting straight into a Collingwood side that was struggling.

By now Crane had found his niche in defence – most often the back pocket, but also occasionally on the half-back flank. He was fast, had a good clearing kick on him and could also be resolute in defence. And he starred in the practice matches, with club officials quick to brief newspapers that he was “a former schoolboy champion”.

He played the first three games of the season, and was named in the club’s best players after the first one against North Melbourne. The Sporting Globe later paid tribute to the Magpies’ last line of defence, saying: “Crane, Regan and McPartland…gave magnificent displays of how backs should clear their territory.”

He lost his place after three games, but came back for another late in the season. He also played three games with the reserves. For a kid who was still just 19, it seemed a promising start.

But then the War intervened. He had still been on active service while at Victoria Park, and he served at depots in Laverton and Mildura. He also had an 11-month stint in Port Moresby from April of 1944. A storeman by profession, part of his service was as an instrument maker and repairer, and he rose to the rank of Leading Aircraftman before completing his service late in 1945.

Despite him still being young, there were no further opportunities at VFL level for Bill Crane when he returned from the War. A prodigiously talented schoolboy player, he had simply had the misfortune – like so many others – to be trying to make his way in the game at precisely the wrong time.